Officers try to control a mock protest at the Police College during an exercise to prepare for Occupy Central. Photo: Felix Wong

“Protesters” blocked a road on the grounds of the Police College in Aberdeen yesterday in what force insiders described as a “major exercise” to prepare for possible trouble during the Occupy Central mass sit-in.

All parking at the college was suspended for the day to facilitate the seven-hour exercise, which began at about 10am.

During a simulated march, there were chants of “make way” and “stop the northeastern New Territories new-towns plan” from the 30 or so protesters, all of whom were officers. One group barged into police and another blocked the road.

Officers then formed a cordon around the sit-in, while other police arrived with barricades. Protesters lying on the ground were carried to a bus nearby. The Police College will be turned into a temporary detention centre for the first time during the July 1 operation, according to police sources. Photo: Felix Wong Some 4,000 officers will be deployed to maintain order during the annual July 1 march, part of their preparations for the Occupy Central protest, which will go ahead if the government fails to come up with an acceptable plan for the 2017 chief executive election.

The Police College will be turned into a temporary detention centre during the July 1 operation, police sources said. 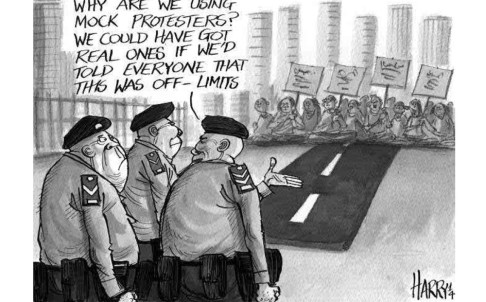