Hong Kong Protest Leaders Expose Themselves As US Tools

The recent turn of events in Hong Kong has further exposed that the protesters have a close relationship with right-wing US politicians and they are being used as a tool in the Great Power Conflict against China, which is a primary focus of US foreign policy.

While the people of Hong Kong suffer from uber-capitalism put in place by the British colonizers and a government that has been corporatized by the Hong Kong Basic Law, which requires half the elected legislature represent industry interests, these protests are not a worker-revolt against the serious economic problems faced by Hong Kongers. 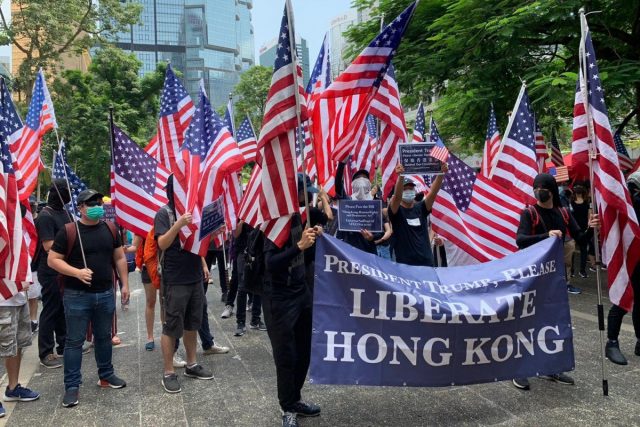 The overt nature of the protests being a US tool is demonstrated by the protests now focusing on the United States passing the Hong Kong Human Rights and Democracy Act. The Congressional-Executive Commission on China, co-chaired by Marco Rubio (R-FL) and Rep. Chris Smith (R-NJ), is the source of the bill, which would require the US to assess Hong Kong’s level of political autonomy each year to determine whether it should continue to have special trade status under the US-Hong Kong Policy Act of 1992 and make officials vulnerable to US sanctions.

While the bill is being pushed by right-wing neocons and regime change activist senators like Rubio, it is a bi-partisan issue as opposition to China is central to US foreign policy.  Huff Post reported Chuck Schumer saying: “U.S. legislation addressing China’s actions in Hong Kong will be among the top priorities pushed by Senate Democrats when Congress returns to work after a recess next week.” Schumer urged Majority Leader Mitch McConnell, a Republican who sets the floor agenda to bring up the bipartisan bill.

Joshua Wong, the so-called democracy activist who is very close to the US regime change organization, the National Endowment for Democracy, was arrested when he returned from Hong Kong for violating his bail by leaving the country. Wong made a special trip to the United States to meet with Rubio and Smith. This tweet from Telesur memorializes their recent meeting:

Left: At the Congressional Commission on China, a U.S. body which ‘monitors human rights & rule of law in China’

This visit coincided with a change in direction for the protests as they turned to the US Consulate in Hong Kong. Reportedly, the US consulate protest was organized by a post on Telegram. Protesters carried US flags, sang the Star-Spangled Banner and held signs urging President Trump to “Liberate Hong from China.” They also carried the now traditional “SOS” signs that have been used by US-allied protesters in Venezuela and Nicaragua.

While there have always been a handful of protesters waving US national flags in recent months, today’s march from the US consulate looks to be the most red, white and blue protest that Hong Kong has seen pic.twitter.com/a3cyl6X5St

Thousands of #HongKong protesters on Sunday chanted the #StarSpangledBanner and called on US President Trump to “liberate” the city. https://t.co/1MxPGw60Va

JUST IN: Protesters march to US consulate in Hong Kong to demand Trump to “liberate” them from China https://t.co/wobCjViO0D pic.twitter.com/MZ8jCnUESa

The South China Morning Post quoted a protester: “With the bill, we have the opportunity for Americans to put more pressure on the current government, to protect our rights,” Kevin said. “We trust the [President Donald] Trump government will work with the bill as intended, and I’m sure that they are watching today.” Protesters noted they had the support of the Republican and Democratic Party as well as the Tea Party.

Inviting US sanctions against Hong Kong will make the economic situation for Hong Kongers even worse than they currently are. In an editorial, the South China Morning Post said the removal of the special trade status for Hong Kong would “backfire on the city’s freedom and economy.” It urged Hong Kong problems to be solved by the Hong Kong government, not foreign powers.

Anyone who has followed US foreign policy and observed how unilateral coercive measures (sanctions) have been used to destroy economies of nations where the US seeks regime change knows that such actions will lead to death and misery for the people of Hong Kong.

Protests Get More Violent and Smaller

Prior to this change in direction, the Hong Kong protests were beginning to get smaller but they were also becoming more violent.

The South China Morning Post reported that fewer protesters turned out on the streets on Saturday, perhaps because the extradition bill had been withdrawn a few days earlier. A large police presence stopped a takeover of the airport and train stations. Police, outnumbering the protesters, quickly dispersed the crowd at the train station when violence was developing.

SCMP reports “the worst violence happened late in the evening inside Sha Tin MTR station, where a dozen protesters cornered police officers and attacked them with umbrellas and metal objects. The officers retreated into a control room as protesters tried to kick down the door, until the riot police arrived to rescue their colleagues.”

A timeline of Saturday’s protests reported vandalism of turnstiles at metro stations. While there were moments of tension on Saturday, they report that “the crowds were visibly smaller.”

Even those on the Western-Left who were inclined to support the Hong Kong protests, mistakenly thinking they were worker protests, now see that the protests are being manipulated to serve an anti-China agenda of the US, which will not benefit workers. The pro-Trump signs, support of the Tea Party and right-wing politicians is helping people break through the propaganda and see reality.