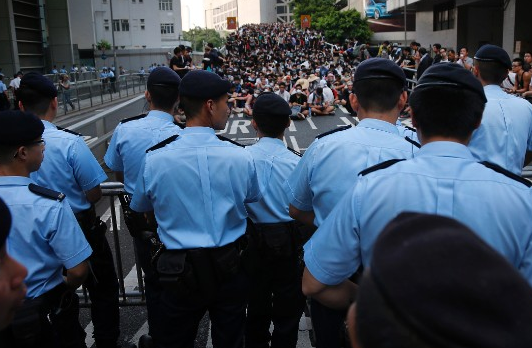 Hong Kong (CNN) — The Hong Kong government said Monday that riot police have pulled back from pro-democracy demonstrations around the city that have caused widespread disruption in one of Asia’s financial hubs.

Defiant demonstrators remained on the streets of Hong Kong’s financial center, blocking traffic on key highways a day after clashes with police that left more than 40 people injured.

Explaining the decision to withdraw the riot police, the government said in a statement that the protesters on the streets were now behaving peacefully. But protesters have pointed out that the unrest Sunday resulted from heavy-handed police tactics.

Riot police remained on guard on the sidelines of the main protest area near the government headquarters, although not in large numbers.

The government urged the demonstrators to disperse to allow emergency vehicles, public transport and other traffic to pass. Its statement followed calls from some protest organizers for people to return home.

But with thousands of demonstrators continuing to jam streets in key financial and commercial districts, it appeared unlikely that the extraordinary protest movement would end anytime soon.

The demonstrations, which authorities have intermittently attempted to disperse by force, follow a week of student-led boycotts and protests against what many see as the encroachment of China’s political will on Hong Kong’s governance.

The protesters were responding to China’s decision to allow only Beijing-vetted candidates to stand in the city’s elections for chief executive, Hong Kong’s top civil position.

‘Our demands have not changed’

One student group, fearing police might use rubber bullets, asked late Sunday for demonstrators to leave. But while the mood at the primary protest calmed, there was no large exodus.

Not all protest leaders were calling for people to leave. Pro-democracy activist and lawmaker Leung Kwok-hung, known by many as “Long Hair,” cheered on those who were staying.

“Our demands have not changed. This is a peaceful civil disobedience protest,” he called out over a loudspeaker as midnight approached.

Cardinal Joseph Zen, the former Catholic Bishop of Hong Kong and a leader of Occupy Central, was one of the organizers who called for demonstrators to disperse.

“Please go home, don’t sacrifice your lives,” he said to the protesters. Dialogue is impossible at this point, he told them.

At least 41 people have been injured and taken to hospitals, the Hong Kong Information Services Department said Monday. A spokesman gave no details on the extent of the injuries. The department earlier said six police officers were injured, but it was unclear whether they were included in the 41 figure.

Several of the young people occupying the business district told CNN they were going to stay overnight.

The student-led protests, which were joined Sunday by the like-minded Occupy Central movement, have sought to occupy government property and shut down the business district.

In an early morning video statement addressed to all Hong Kong residents, Hong Kong Chief Executive C.Y. Leung called for people to leave. He said police have exercised the greatest possible restraint in dealing with the protesters.

Riot police have occasionally wielded batons against protesters. They have also used pepper spray, and tear gas has been deployed against more than one group of protesters around the Central Government Offices. There were more reports of tear gas early Monday.

Protesters wore goggles or masks and raincoats, and many held umbrellas to protect against the possible use of pepper spray.

There is an “optimal amount of police officers dispersed” around the scene, a Hong Kong police spokesperson told CNN.

Police said they have arrested 78 people, ranging in age from 16 to 58, including some leaders.

The group later tweeted that Alex Chow and Lester Shum, who were arrested Saturday, also had been released.

In a statement Sunday evening, Yvonne Leung said the protesters called for C.Y. Leung and three other politicians working on political reform to resign. If the demand, and three others, go unmet, the students vowed to step up their protests and will boycott school.

The previous week had seen days of action, as university and high school students came out in droves to rally against what they believe is the Chinese central government’s reneging on key promises for Hong Kong’s political future.

C.Y. Leung said at a news conference Sunday afternoon that a round of consultations on electoral reform will take place “shortly” but went on to appeal to pro-democracy activists to engage in rational discussions through lawful means.

He reaffirmed that the government in Hong Kong will uphold Beijing’s decision.

The Chinese central government said that it is “confident” that the Hong Kong government can handle the movement lawfully, according to a report in Chinese state media. The Chinese government opposes all illegal activities that “could undermine rule of law and jeopardize ‘social tranquility,'” the report says.

The protest movement developed into a much larger, more inclusive display of defiance as the Occupy Central movement joined the students’ rally early Sunday.

The pro-democracy advocacy group, which is not affiliated with the broader anti-capitalist Occupy movement, has been vowing to lead a campaign of civil disobedience in the face of China’s decision to control what candidates can run for Hong Kong’s top office.

“Occupy Central has formally begun,” said a statement by the group. “The two nights of occupation of Civic Square in Admiralty have completely embodied the awakening of Hong Kong people’s desire to decide their own lives.

“The courage of the students and members of the public in their spontaneous decision to stay has touched many Hong Kong people. Yet, the government has remained unmoved. As the wheel of time has reached this point, we have decided to arise and act.”

C.Y. Leung told CNN that fears that the nominating process for the 2017 election were too restrictive were “unfounded.”

“We have not even started to discuss the detailed but crucial aspects of the nominating process for potential chief executive candidates,” he wrote in an exclusive commentary.

“This will be the subject of a public consultation to be launched soon and which will eventually lead to the enabling legislation on changes to the electoral method for the 2017 election.”

Many in the city, which under British rule enjoyed considerable political freedom, fear a rollback of the city’s political autonomy, agreed between Britain and China under the Basic Law. The Basic Law, which serves as a de facto constitution, was written in the lead-up to the 1997 handover of sovereignty.