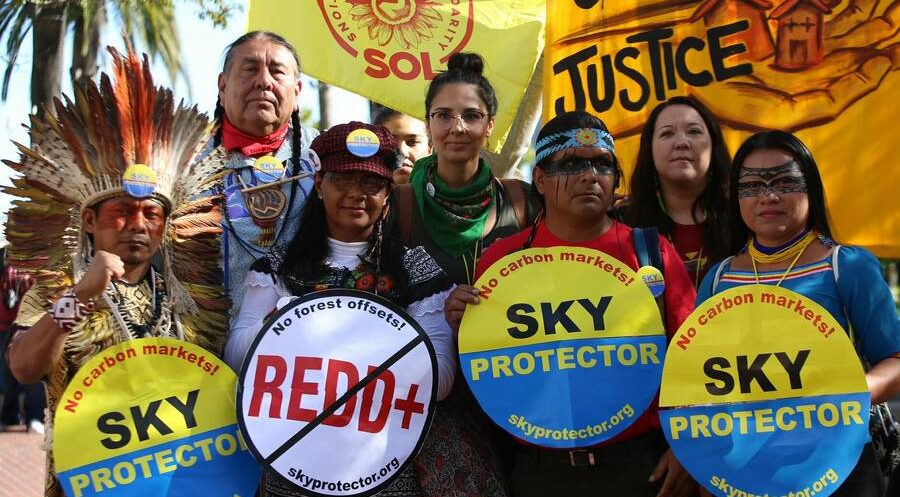 As the legacy of colonialism destroys our environment, Indigenous Peoples are at the forefront of fighting back.

When Christopher Columbus landed on Turtle Island, which we now call North America, he brought with him a goal of making profit — of taking from the land and people to create commerce. Today, approximately 526 years later, that same pillaging continues to drive our planet further into the climate crisis and lead us into ecological collapse. Instead of honoring the violent colonization Columbus represents, we should use this day to call for truth and reconciliation — and honor the Indigenous communities at the forefront of efforts to heal the long-lasting environmental harm Columbus and his ilk have wrought.

Settler colonialism has exacerbated climate change and made Indigenous communities sacrifice zones to this crisis. As we honor the truth of how this country was founded and continues to exploit Indigenous lands and territories, we must also recognize that climate change disproportionately impacts the Indigenous and Native peoples who are least responsible for this crisis.

Climate change is just another symptom of colonization. First, our lands were stolen from us or we were forcibly moved from our original territories and placed into reservations. Then, those stolen lands were turned into toxic places for resource extraction. In Navajo Nation, you have uranium mining and coal plants that continue to cause disease. In Oklahoma, near Ponca territory, you have fracking that has disturbed the earth so deeply that earthquakes are happening more often and stronger. In California and Washington, home to dozens of tribes, dams have destroyed salmon runs to the point that salmon no longer exist in rivers. So, beyond destroying the ecological balance of these places, these projects and industries also pollute and emit carbon into the atmosphere, therefore contributing to climate change. Not only are Indigenous Peoples bearing the brunt of climate change, but it’s through the colonization of our lands and of our people that climate change is being exacerbated

We have to recognize that restoring relationships between non-native and native peoples goes beyond just replacing the name of a day on the calendar: It means really acknowledging how colonization has and continues to impact native and indigenous peoples, especially when it comes to climate change. And it requires acknowledging that Indigenous communities are promoting and creating the most innovative and the most efficient solutions to the climate and ecological crisis we are in.

At this time, governments and corporations are looking to the carbon market system as the best solution to climate change, so they are creating mechanisms such as carbon pricing, carbon trading, carbon taxes and REDD+. However, these false solutions only allow big polluters to continue to extract and pollute by buying credits to become ​“carbon neutral.”

This past September, California Governor Jerry Brown hosted the Global Climate Action Summit, where he and his Governors’ Climate and Forests Task Force promoted these carbon market systems. In response, Indigenous Peoples from across the world also convened in San Francisco for the Solidarity to Solutions Week of Action, to demand an end to climate capitalism — and an investment in real solutions, starting with keeping oil in the ground.

To continue the momentum that was started to resist these false solutions, the Indigenous Environmental Network, where I work, and its allies from across the world have launched the #SkyProtector campaign. Just as there are #WaterProtectors who defend water from pipelines and the fossil fuel industry, we are now seeing a rise of #SkyProtectors who are protecting the climate from false solutions. To drive that emerging movement, IEN and the Climate Justice Alliance have created a Carbon Pricing Report to educate Indigenous communities about the carbon market system and how it impacts us.

While our so-called leaders continue to ignore Indigenous rights, continue to break treaties, and continue to drive us into further ecological collapse, we the people can take initiative to understand how colonization continues and how we can build right relationship with Native and Indigenous Peoples. And we need only to look at the most urgent issue of our time, climate change, to see how colonization is still playing out, who is impacted the most and who is bringing the true solutions to the table.

Jade Begay, Diné and Tesuque Pueblo, is a multimedia artist and documentary filmmaker. Jade is the Communications and Digital Director at the Indigenous Environmental Network.