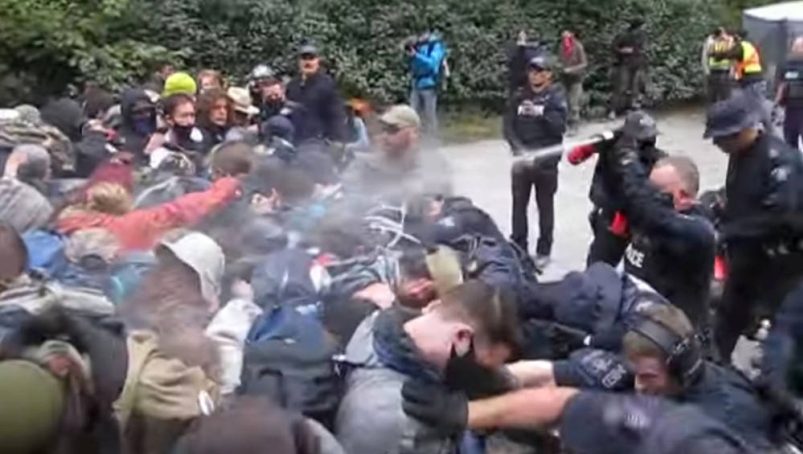 Above photo: RCMP use pepper spray on protesters at Fairy Creek. Another political dispute shifted onto police ill-equipped to handle them? Image taken from a video posted to YouTube on Aug. 21, 2021.

The BC government has failed in its duty to ensure police actions are lawful.

The NDP government can’t keep dodging responsibility for the debacle at Fairy Creek — or the much bigger questions about the RCMP’s role in the province.

Especially as increasing RCMP resources — with provincial government approval — are devoted to shutting down protests, frequently by Indigenous people.

Last week, the BC Supreme Court refused to extend an injunction against protesters blocking logging, citing RCMP civil rights’ abuses — facilitated by the provincial government — in enforcing the court order.

The dispute is about old-growth forests on southern Vancouver Island. Protesters blocked licence-holder Teal-Jones from logging in late 2020.

On April 1, BC Supreme Justice Frits Verhoeven granted the company an injunction preventing the protesters from blocking roads or interfering with company operations. Their “conduct is illegal, and undermines the rule of law, without which no one is safe, and no one is free,” he wrote. Verhoeven agreed to the company’s request for police enforcement against the “very militant group.”

In last week’s ruling ending the injunction, Justice Douglas Thompson supported Verhoeven’s initial judgment. “Standing behind lawful rights in these circumstances promotes the rule of law and is undoubtedly in the public interest, as the judge observed,” he wrote.

But Thompson found the RCMP’s enforcement trampled on civil rights, went far beyond the terms of the injunction, unreasonably hid its actions from journalists’ scrutiny and failed basic tests of accountability.

He noted the RCMP ordered officers “to remove any individual identification,” preventing citizens from filing complaints about the actions of individual officers. And the national police force didn’t enforce its own directive that officers not wear “thin blue line” patches, seen by some Indigenous people “as symbolic of the history of RCMP involvement in enforcing policies that brought about the genocide of Indigenous peoples.”

Enforcement over the past six months — with more than 1,000 arrests — hadn’t resolved the dispute, he found. And despite generally acceptable actions by police and protesters, some “disquieting lapses in reasonable crowd control” by the RCMP were widely broadcast and reflected badly on the court.

Damning for the RCMP, found to be violating the terms of the injunction and citizen’s rights and behaving more like a paramilitary organization than a law enforcement agency.

But also bad news for the provincial government, which refused to take any responsibility for protecting the rights of British Columbians.

“The RCMP is not directed by government,” Horgan said last week. “I’ve said that numerous times.” The Solicitor General’s Ministry says the enforcement is “an operational matter for the RCMP and is entirely at arms’ length from government.”

The argument is that independence is needed to ensure politicians don’t direct police investigations for their own ends, ordering operations that advance the interests of supporters or harm foes.

Reasonable in many cases. But not when it comes to RCMP operations in British Columbia. Because if the provincial government refuses to provide oversight, there is no meaningful accountability.

By Sept. 10, 186 complaints about Fairy Creek RCMP enforcement had been filed with the Civilian Review and Complaints Commission, a federal government-appointed oversight agency.

But the commission relies on the RCMP to investigate those complaints. It can order further investigation, but that decision is based on the information the RCMP provides. A real independent watchdog would have independent investigators. (Municipal police forces in B.C. have independent oversight through the Office of the Police Complaints Commissioner.)

The process for investigating complaints against the RCMP is also often ridiculously slow. The BC Civil Liberties Association has filed a case in Federal Court alleging the process effectively denies accountability.

In 2014, the civil liberties association filed a complaint about RCMP spying on environmentalists. The commission took three years to complete its draft report. But draft reports stay secret until the RCMP commissioners responds — and that took another four years.

With a broken system and endless delays, the B.C. government, responsible for policing under the Constitution, has an obligation to protect the rights of citizens. Instead, it ducked.

Elected officials should not direct police operations (as then Ontario premier Mike Harris did in the deadly Ipperwash conflict with Indigenous people).

But that does not mean they hide from all responsibility. Premiers in Atlantic Canada talked about their expectations around enforcement of COVID-19 measures. Former Conservative leader Andrew Scheer urged faster action on blockades in support of the Wet’suwet’en opposing a pipeline.

And Horgan, or Solicitor General Mike Farnworth, could have raised concerns about police tactics at Fairy Creek without directing police actions.

They could have noted that the scenes being shared in news and social media were alarming to them — as they were to most British Columbians — and raised the issue publicly and with the federal Solicitor General.

They could have noted that after millions of dollars in police costs, more than 1,000 arrests and escalating conflicts, the enforcement effort has been a failure, suggesting to any rational person that changes were needed (without specifying what should change).

And the government certainly could, and should, have expressed concern when the BC Supreme Court ruled in July that the RCMP had illegally expanded the size of exclusion zones to keep protesters and reporters out of the area — measures not authorized in the injunction.

Especially because the provincial government helped the RCMP act unlawfully. As Thompson noted in last week’s judgment, rather than seeking a change to the injunction to allow broader exclusion zones, Teal-Jones and the RCMP did an end run. The police asked Teal-Jones to apply for security gates at six places on roads in the tree farm licence area.

“Teal Cedar was prompted to apply for these permits as part of the RCMP’s blockade strategy,” he wrote. “The Ministry of Forests granted the permits.” That’s despite legislation saying forest roads should remain open to the public with limited exceptions and, Thompson noted, the fact that the injunction required the roads to be kept open.

Under the circumstances, it is hard to understand why the Forests Ministry went along with the request from Teal-Jones and the RCMP rather than tell them to return to court if they wanted broader powers.

None of this would violate the conventions around avoiding political interference in policing.

During the Wet’suwet’en blockades, Simon Fraser University criminology professor Rick Parent — a former police officer — told the CBC that politicians’ excuses for remaining silent were “weasel words” to avoid taking responsibility — and to shift the burden of what are ultimately political disputes onto police ill-equipped to handle them.

Injunctions have become increasingly used as weapons in these kinds of disputes, and police actions have routinely been challenged and criticized.

Given the high stakes, the potential undermining of democracy, the lack of accountability and the abuses and illegal acts at Fairy Creek, it’s past time for the provincial government to quit dodging its duty to protect citizens.