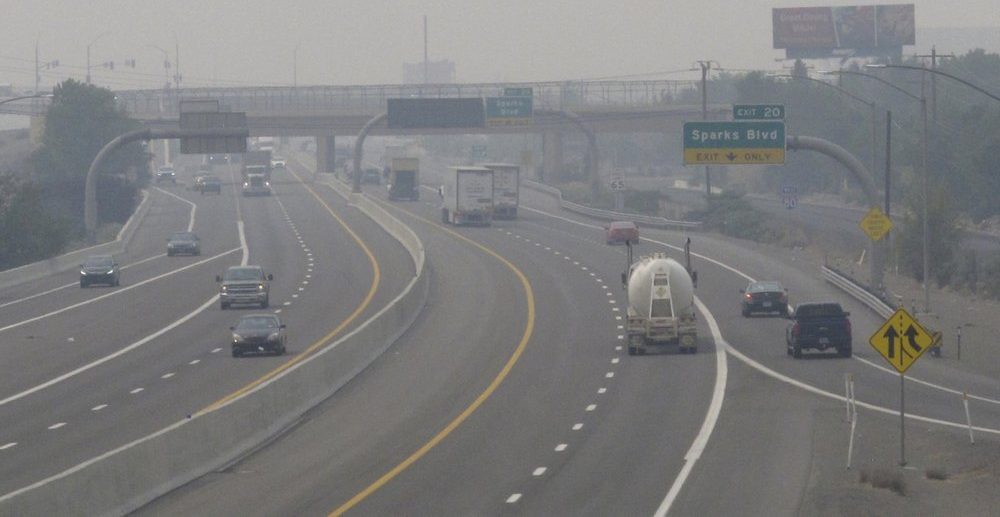 Above photo:  In this Wednesday, Aug. 19, 2020. file photo, smoke from California wildfires up to 200 miles away obscures the view of traffic traveling on Interstate 80, looking west in Sparks, Nev. AP Photo/Scott Sonner.

While NASA and a couple of other measurement groups said 2020 passed or essentially tied 2016 as the hottest year on record, more agencies, including the National Oceanic Atmospheric Administration, said last year came in a close second or third. The differences in rankings mostly turned on how scientists accounted for data gaps in the Arctic, which is warming faster than the rest of the globe.

“It’s like the film ‘Groundhog Day.’ Another year, same story — record global warmth,” said Pennsylvania State University climate scientist Michael Mann, who wasn’t part of the measurement teams. “As we continue to generate carbon pollution, we expect the planet to warm up. And that’s precisely what we’re seeing.”

Scientists said all you had to do was look outside: “We saw the heat waves. We saw the fires. We saw the (melting) Arctic,” said NASA top climate scientist Gavin Schmidt. “We’re expecting it to get hotter and that’s exactly what happened.”

NOAA said 2020 averaged 58.77 degrees (14.88 degrees Celsius), a few hundredths of a degree behind 2016. NASA saw 2020 as warmer than 2016 but so close they are essentially tied. The European Copernicus group also called it an essential tie for hottest year, with 2016 warmer by an insignificant fraction. Japan’s weather agency put 2020 as warmer than 2016, but a separate calculation by Japanese scientists put 2020 as a close third behind 2016 and 2019. The World Meteorological Organization, the British weather agency and Berkeley Earth’s monitoring team had 2016 ahead.

First or second rankings really don’t matter, “but the key thing to take away is that the long-term trends in temperature are very very clearly up and up and up,” said Schmidt, who heads NASA’s Goddard Institute for Space Studies that tracks temperatures. “We’re in a position where we’re pushing the climate system out of the bounds that it’s been in for tens of thousands of years, if not millions of years.”

All the monitoring agencies agree the six warmest years on record have been the six years since 2015. The 10 warmest have all occurred since 2005, and scientists say that warming’s driven by the burning of coal, oil and natural gas.

Temperatures the last six or seven years “really hint at an acceleration in the rise of global temperatures,” said Russ Vose, analysis branch chief at NOAA’s National Centers for Environmental Information. While temperature increases have clearly accelerated since the 1980s, it’s too early to discern a second and more recent acceleration, Schmidt said.

Last year’s exceptional heat “is yet another stark reminder of the relentless pace of climate change, which is destroying lives and livelihoods across our planet,” United Nations Secretary-General António Guterres said in a statement. “Making peace with nature is the defining task of the 21st century.” 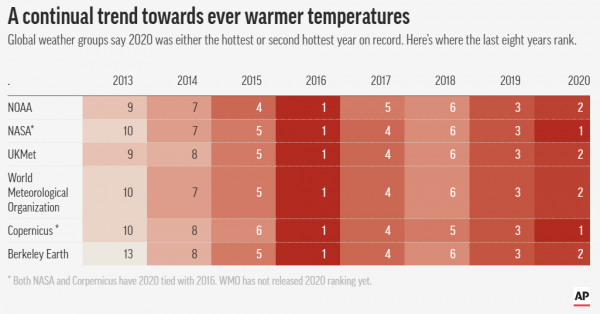 The United States, which had its fifth warmest year, smashed the record for the number of weather disasters that cost at least $1 billion with 22 of them in 2020, including hurricanes, wildfires, tornadoes and a Midwest derecho. The old record of 16 was set in 2011 and 2017. This was the sixth consecutive year with 10 or more billion-dollar climate disasters, with figures adjusted for inflation.

That means the planet is nearing an international warming threshold set in Paris in 2015, Vose and Schmidt said. Nations of the world set a goal of preventing at least 2 degrees Celsius (3.6 degrees Fahrenheit) of warming, with a tougher secondary goal of limiting warming to 1.5 degrees (2.7 degrees Fahrenheit).

“We cannot avoid 1.5 C above pre-industrial now — it is just too late to turn things around,” University of Oklahoma meteorology professor Jason Furtado, who wasn’t on any of the measurement teams, said in an email. “I also fear that the 2 C threshold is slipping away from us too unless changes become much more immediate in the US and other nations.”

The main reason the agencies have varying numbers is because there are relatively few temperature gauges in the Arctic. NOAA and the British weather agency take a conservative approach in extrapolating for the missing data, while NASA factors that the Arctic is warming much faster than the rest of the globe, hitting 100 degrees (38 Celsius) in the Russian Arctic last June, said NASA’s Schmidt.

The pandemic may have added ever so slightly to last year’s warming, enough to edge 2020 past 2016 in NASA’s calculations, Schmidt said.

Around the globe, people were driving less — and that reduced short-term aerosol pollution which acts as a cooling agent by reflecting heat. Schmidt said fewer cooling aerosols could be responsible for .09 to .18 degrees (.05 to .1 degrees Celsius) warming for the year.

NOAA’s Vose and Schmidt expect 2021 to be among the top five hottest years but probably not a record breaker because of natural temporary cooling in parts of the Pacific called La Nina.

NOAA and NASA measurements go back to 1880, while the United Kingdom Met Office has readings back to 1850. 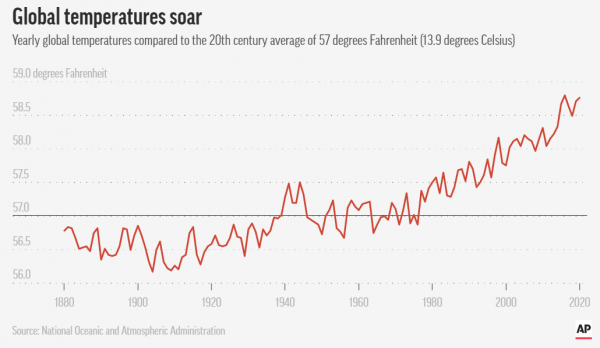