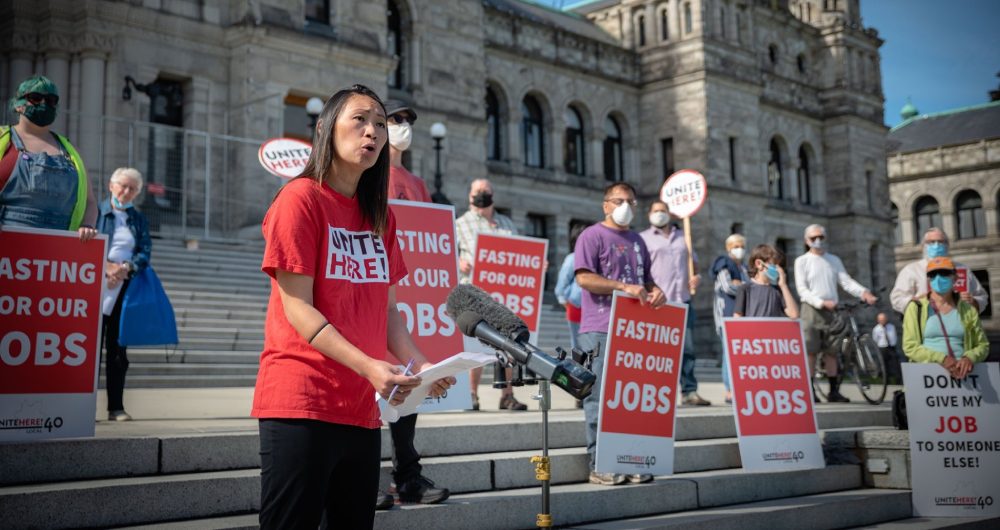 A former Pan Pacific employee’s bid to launch a class action lawsuit is the latest effort to protect workers in the sector.

A former worker is proposing a class action lawsuit against a major Vancouver hotel over alleged wrongful terminations during the COVID-19 pandemic.

Romuel Escobar, who worked at the Pan Pacific hotel for 24 years before being fired in August, filed a notice of civil claim in B.C. Supreme Court Wednesday.

His lawsuit accuses the hotel of terminating workers without cause or notice. It also seeks to represent some 250 current and former regular hourly employees directly impacted by the pandemic in a class action suit.

Unite Here Local 40, which represents B.C. hotel workers, supports the legal action. Workers at the hotel were not members of the union, but Local 40 says it was working with them in a union organizing effort last summer. The claim alleges that was a factor in some of the terminations.

In a Wednesday press conference, Local 40 president Zailda Chan said many of the terminated workers were long-term employees and women of colour.

She said that if the case is successful, they could share around $3 million in damages.

“Pan Pacific hotel workers are taking a stand and fighting back for all B.C. hotel workers who deserve far better treatment from an industry where they’ve devoted their lives,” she said.

According to Escobar’s claim, by last May Pan Pacific had planned to operate with around 80 employees out of the approximately 450 who were employed before the pandemic. That included 254 hourly employees, who Escobar seeks to include in the class action suit.

While some have already stopped receiving shifts, the statement alleges hotel management also asked some hourly employees in July to become casual on-call staff in exchange for $250 — with the belief that their jobs would be safe. The new designation would take away their right to severance.

The claim alleges Pan Pacific’s communications deliberately misled its workers into thinking that the hotel would recall them.

The hotel then allegedly terminated its workers without cause or notice in staggered groups, with fewer than 50 people in each batch to avoid enhanced notice and pay requirements for group terminations under the Employment Standards Act. Escobar said he was terminated in August with around 40 other workers.

“The Pan Pacific’s actions were dishonest, self-serving and reprehensible,” Chan said in a press release.

The allegations have not yet been tested or proven in court. Pan Pacific hotel did not respond to The Tyee’s comment request by press time.

Chan said the issue is common for workers across the hospitality sector.

The sector was among the earliest and hardest hit by COVID-19, and around 50,000 B.C. hotel workers were laid off in March.

As the pandemic drags on, other hotels have also terminated their staff or proposed cuts to worker’s benefits and protections in exchange for bringing them back to work.

Chan said these actions are “equally unacceptable” and could lead to further legal action.

The union also reiterated its call on the B.C. government to introduce stronger job protection measures. In particular, it has urged the government to extend laid-off workers’ right-of-recall period to 24 months and make bailouts for the industry contingent on protecting employees.

Last summer, hotel workers also staged a hunger strike to draw attention to their plight. The strike lasted 22 days, ending after Labour Minister Harry Bains announced B.C. would “ensure that any government economic recovery package, particularly for the tourism and hotel industry, contains a pledge for employers to offer a right of first refusal to existing employees when work resumes.”

But when B.C. announced $105 million in relief funding for the tourism sector in December, it did not include a pledge to protect workers’ jobs.

“This lawsuit seeks to send a message that this is not okay,” Chan said.

“And that every day that passes where more and more hotel workers are terminated, it’s really under the province’s watch that they are turning their backs on 50,000 hotel workers.”

Alex Nguyen is a Vancouver-based journalist with interests related to affordability, equity and health. Her work has appeared in the Globe and Mail, Ricochet Media and the Ubyssey. Find her on Twitter @alexnguyen2311.