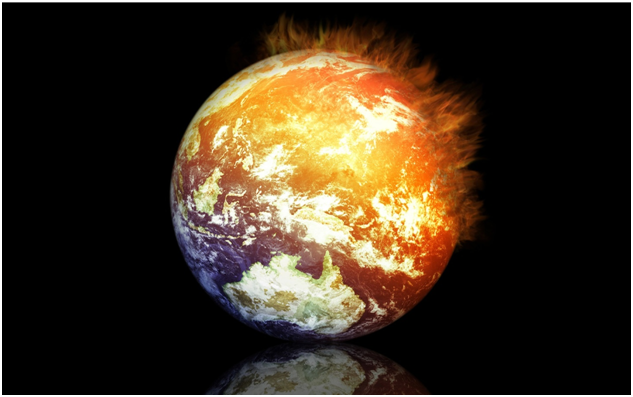 Above Photo: From Countercurrents.org

Hothouse Earth is this summer’s Uninhabitable Earth, a chilling reminder of how close we are to possibly fatal climate change. The Steffen et al PNAS paper is a review of the climate science concerned with the interplay of ten potential tipping points which when triggered by temperature rise due to anthropogenic warming could potentially push the Earth out of it’s present supportive climate and into a 4 or 5C warmer state where civilization as we know it would collapse and, with much of the planet uninhabitable, humanity’s very existence would be threatened.

“There is a risk that feedback processes intrinsic to the Earth System could form a “tipping cascade”, in which the feedbacks act like a row of dominoes,” lead author Will Steffen told Newsweek. “Such a cascade would very likely take the trajectory of the Earth System out of human control and towards much hotter conditions that we call “Hothouse Earth””.

This compelling new science paper should prompt demand for real, effective climate mitigation. Don’t legislators and those in government whose duty it is to prepare for disaster and emergency read climate science? But instead of igniting debate about needed effective climate mitigation after at least three decades of failure, this latest warning from the science community is being ignored. The death of all we know and love could be as close as another decade or two of inaction but the powers that be don’t want to know.

It is important to remember that almost all of the world’s nations have agreed to limit greenhouse gas (GHG) emissions in climate mitigation agreements signed on to from the Rio Summit in 1992 to the Paris Accord specifically to prevent the irreversible runaway global warming that the paper warns about. Our governments have recognized the existential danger and promised to reduce emissions – but only a few have actually instigated effective mitigation.

The paper should be a wake up call about how close we are to unimaginable catastrophe and to question the present pretend mitigation and implement real emission reduction instead. The planet is dangerously close to Hothouse Earth but the global rightward shift on climate change ignores the science and the power people in our society don’t know what they don’t know. Paris targets are not being met. Governments are backing away from even cosmetic mitigation efforts pushed by rampant fossil fuel development and continuing petrostate politics. Moderate climate action is failing.

With time running out after decades of denial and procrastination, effective mitigation now must be disruptive. “A fast, emergency-scale transition to a post-fossil fuel world is absolutely necessary to address climate change”. “It would mean an immediate, sustained global mobilization of a sort that has no precedent in human history”. “We cannot afford to pursue past strategies, aimed at limited gains towards distant goals. In the face of both triumphant denialism and predatory delay, trying to achieve climate action by doing the same things, the same old ways, means defeat. It guarantees defeat.”

The paper’s authors stress that mitigation is still possible but “a deep transformation based on a fundamental reorientation of human values, equity, behavior, institutions, economics, and technologies is required”.

But this scale of disruption is not allowed. Solution aversion rules and realists studiously ignore the emerging climate science. Lukewarming is the new climate denial.  Media coverage of the Steffen et al paper has ebbed to just attacks on climate alarmists from entrenched deniers. There has been no leadership from anyone significant in government or business using the Hothouse Earth paper as an opportunity to press for needed climate action to prevent runaway warming.

Considering what is at stake and the urgent mitigation timeline, we should be having an open and informing debate about climate as an emergency and with consideration of all possibly effective mitigation paths, but instead there is only news of new pipelines and other fossil fuel infrastructure investment.

Those who recognize the runaway warming danger are like patients with a diagnosis of a very treatable cancer who have been repeatably blocked from timely, effective treatment so that their cancer is now probably fatal. Hopefully there is still time for effective climate mitigation but unless there is leadership – especially from business which arguably has the most to lose and must free up government ability to act – soon all of us will be in a place where action to protect all we know and love is no longer possible.