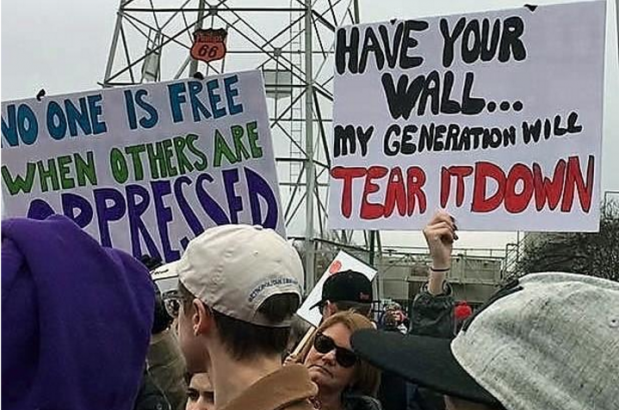 Above Photo: House Bill 2128 creates civil liability for those compensating people if they trespass and cause damage. The bill is aimed at discouraging paid protests, a widely claimed but hard to prove phenomenon. CREDIT KWGS

Citing costs faced by North Dakota in the wake of Dakota Access Pipeline protests, the Oklahoma House passed a bill creating liability for anyone who compensates protesters.

House Bill 2128 says anyone who compensates, remunerates or provides consideration to someone who causes damage while trespassing may be held liable.

Rep. Mark McBride faced a barrage of questions from Democrats, including Rep. Cory Williams, who asked what constitutes compensation under HB2128.

“It means just what we want it to on this bill. How about that?” McBride said.

“I’m sorry, what?” Williams said. “Is it a check? Is it money? Is it staying at somebody’s house? Is it some other benefit conferred?”

“That would be for the courts to decide,” McBride said.

“All due respect, we’re supposed to be writing laws. They interpret them. Our laws should have definitions in them,” Williams said.

Rep. Collin Walke bristled at a provision saying an arrest — not necessarily a conviction — is enough to create that liability.

When Rep. Forrest Bennett started a question, McBride cut him off and forced a vote on the bill.

“I hope that you’ll take my question seriously, because it doesn’t seem like you’ve been taking everybody else’s questions seriously — a bit flippant, and it’s kind of offensive to me. But —” Bennett said.

“I press my motion,” McBride said.

“Let me ask — come on. Come on,” Bennett said, slamming his microphone against the desk.

The House passed HB2128 68–23, the same margin that passed it in March. The House had to take up the bill again after the Senate amended it last month.