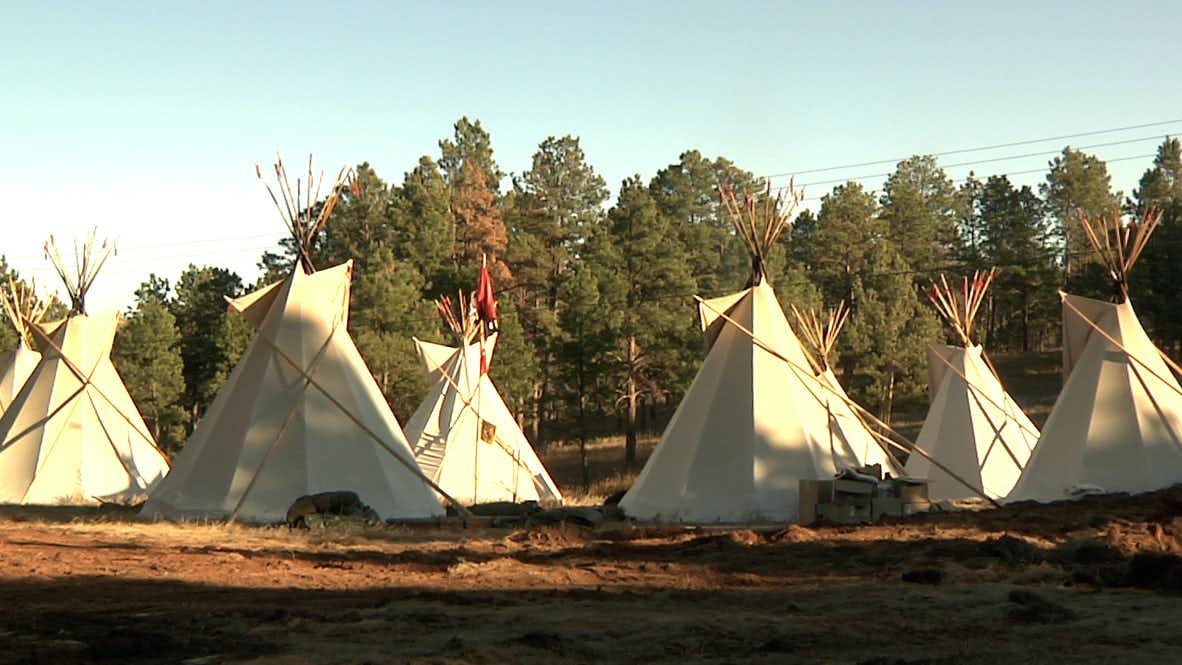 Rapid City, SD – When Lakota activists set up a camp for homeless relatives in this Black Hills town last month, the police descended immediately and shut it down.

The response? The activists quickly moved the encampment to trust land just outside of town.

Today the camp, built on traditional values and teachings, is flourishing.

“They’re giving the people a chance to have somewhere to sleep and live like they used to a long time ago, like the ancestors, you know? ” said Darrell Two Crow, Oglala Lakota, who has sought shelter at the new camp. “You live under a teepee and learn your religious ways. They’re doing a good thing.”

The camp is perched on some 90 acres held in trust for the Cheyenne River, Rosebud and Oglala Sioux tribes that used to be part of the shuttered Rapid City Indian Boarding School.

They call it “Camp Mniluzahan” after the Lakota word for the creek that runs through Rapid City. It’s close enough to downtown to be accessible to the city’s homeless population by short shuttle rides offered by volunteers. But, because it’s on trust land, it’s far enough away to be beyond the reach of local authorities.

“It’s a sovereign place. You just come up there, and they show you things and teach you things. How to put up a teepee. How to survive in the land we were born in,” said Steve Long Sr., an Oglala Lakota citizen who found himself homeless in Rapid City and took refuge at the new camp. “You’re not in the city no more. You’re out here in our hills. These are ours. This land belongs to us.”

The camp grew out of a volunteer effort to feed and protect unsheltered Natives in Rapid City, who for decades have congregated along the creek in town.

Three years ago, Hermus Bettelyoun, Oglala Lakota, was having coffee with his friend Lloyd Big Crow Sr., Oglala Lakota. “Lloyd said, ‘Let’s do something good today,’” said Bettelyoun recently as he took a break from splitting wood out at the camp. “So we went to our cupboards and gathered food and went out and fed 10 relatives” along the creek.

That effort grew into weekly and then near-daily feeds put on to help their homeless relatives — all done a shoestring. They also helped form the Creek Patrol to monitor the health of the people sleeping along the creek and provide security for the unsheltered, who have sometimes been victims of crime.

“(Lloyd) helped me get my priorities straight and made me realize that my responsibility as a human was to help other people,” said Bettelyoun. Added Big Crow: “It’s a community effort. We want to help our people become who they can be and maybe get sober. Give them some love and a hug.”

“You can watch some of the videos (from that day), and you can hear the birds chirping and the kids laughing in the background and the adults sitting around visiting just enjoying themselves,” said Bettelyoun. “Then the police showed up and disrupted all of that.”

The mayor declared the structures illegal, and police moved in force to remove the shelters. Six people ended up in jail, including Bettelyoun, but the project took wing.

“We got out of jail, and we came up here and found this place,” said Bettelyoun as he surveyed a Camp Mniluzahan that was bustling with volunteers stacking firewood, stoking the campfire, grading the dirt road into camp and building out the communal kitchen and eating facilities centered on a large Army mess tent. “The next day the first four teepees went up. We lit the fire, and the fire’s been going since. And it’s just amazing.”

Today the camp, in addition to the mess tent, boasts eight teepees, a number of smaller tents and portable sanitation facilities. The number of homeless relatives staying in camp varies, but on a recent day 48 people had checked in. Camp organizers work to keep the exact location of the site secret and broke a strict media blackout to allow in Indian Country Today to document the unique urban Indian experiment in self-determination.

Some questions remain about the site. The FBI visited early on to inquire about the lack of a memorandum of understanding between the camp and local first responders in case of emergencies.

Such agreements are common in Indian Country where jurisdictional boundaries create unique puzzles. But organizers are bullish about the camp’s prospects and firmly believe that their approach — Natives helping their own, in their own ways, with their own resources and outside of any colonial construct — is the best path forward.

“We’re bringing our people together like the old days,” Big Crow said.

And Bettelyoun said he feels buoyed when he sees evidence the camp’s ethos is bearing fruit.

Camp Mniluzahan has only one rule: respect. Respect for yourself, for others, for the ancestors and future generations.

It’s paying off, he says, with a growing number of camp residents who are staying sober. “Some of the relatives stay up here and do the cooking, split wood,” he said.

“They’re not getting paid for it. They’re doing it because they’re taking pride in what we set up for them.”

The camp also has a sweat lodge so residents seeking to get off drugs and alcohol can take part and “find that spirituality that maybe they lost or maybe they forgot.”

Bettelyoun paused and looked out over the camp nestled in a small meadow surrounded by ponderosa pines. “But it’s slowly coming back.”