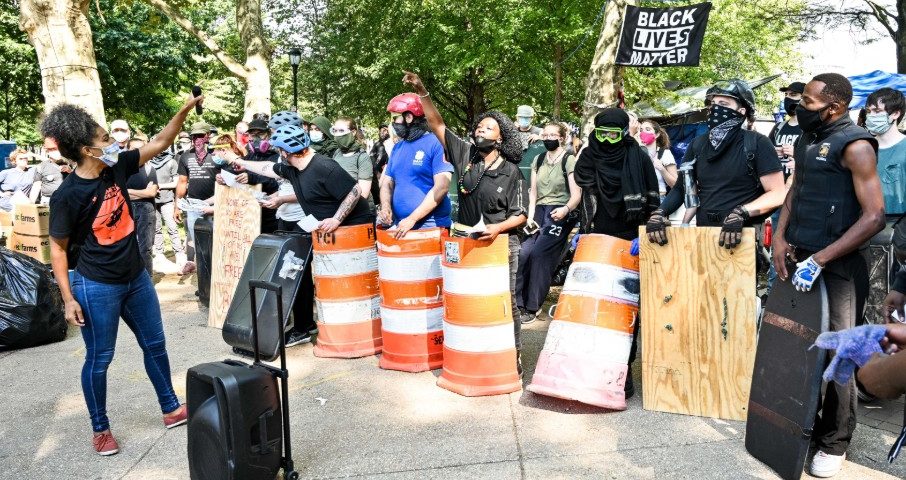 An encampment of over 100 houseless people sits on the Benjamin Franklin Parkway here, steps away from the iconic art museum of “Rocky” movie fame and under the noses of the Philadelphia bourgeoisie. JTD camp is a self-declared autonomous and cop-free zone providing a safe environment at a time when the COVID pandemic is ravaging the city. A large “Black Lives Matter” banner hangs at the entrance.

The James Talib Dean camp, named to honor an organizer who died shortly after it was established in June, is the latest in a series of camps set up by local activist groups. The JTD camp and a smaller Camp Teddy — on the site of the new multimillion-dollar Philadelphia Housing Authority (PHA) headquarters in North Philadelphia — show that the Kenney administration has repeatedly failed the poor.

The PHA suffers from mismanagement at best. OccupyPHA, the Workers Revolutionary Group and the Black and Brown Workers Cooperative, among others, are stepping in to fill the void created by the city’s failure to solve Philadelphia’s growing housing crisis.

An eviction notice posted by the city on Aug. 17 gave residents less than 24 hours to leave or be forcibly removed. This second attempt to sweep away the camp was halted by an injunction filed Aug. 20. The eviction threats are the mayor’s attempt to pacify residents of luxury condos lining the parkway, whose gentrifier sensitivities are upset by the presence of the camp on their doorsteps.

The camp’s message is clear. They will not disperse until Mayor Jim Kenney guarantees permanent housing for all residents of the camp. Camp organizers and supporters rallied overnight and into the early morning of Aug. 18. They erected makeshift barricades while a strong defensive force maneuvered along the camp’s outskirts, according to Workers World Party members on the ground.

When no police had appeared by midmorning, it was clear the city had backed down. The organizers agreed to return to the bargaining table with the city, but remained firm on their demand for permanent housing. The injunction against any eviction expires Aug. 25.

The demands by camp organizers call for the city to transfer ownership of vacant housing properties away from the PHA, Philadelphia Redevelopment Authority (RDA) and Philadelphia Housing Development Corporation (PHDC). The properties would instead be placed into a permanent community land trust for permanent low-income housing, administered by local community-controlled committees.

Organizers also want a city moratorium against PHA, RDA or PHDC buying, acquiring, obtaining, trading, auctioning or selling off properties to private entities until all PHA waiting list applicants have been housed. The moratorium would stay in place pending an independent study on the effects of mass sales and trade-offs on communities and community members. (tinyurl.com/y6b633b8)

Kelvin Jeremiah, CEO of the PHA, continues to lie and vilify individuals working tirelessly to expose the abuses of the PHA. Nadera Hood is one such individual. She routinely livestreams proof of the rampant neglect and abuse by the PHA and their strong-arm private police force.

Banned from posting on PHA facebook page, Hood is nevertheless an outspoken critic on social media, saying that Jeremiah “continues to attempt to discredit our work by making false and defamatory statements. . . . He keeps bringing up how what we are doing is unfair to the people on the waiting list [for permanent PHA housing]; however, when PHA builds new units, they do not go to people on the waiting list. PHA actually opens new applications and gives a couple days to apply, sometimes in person.”

This is a very troublesome practice considering the precarious situation of houseless individuals. Alarmingly, PHA is in the habit of selling properties to developers who resell them at full market value. Jeremiah commands a lucrative salary and lives in an affluent neighborhood on the city outskirts. His home is now guarded by PHA police, after being targeted with protests by houseless organizers.

The fate of the JTD camp on the Parkway and the Teddy camp in the city’s north is tenuous. Residents, organizers and supporters are pragmatic when it comes to dealing with the city, but their mood and energy remain upbeat and resolute. No one is leaving despite the city’s ultimatum.

Mike Wilson, Workers World Party member and camp supporter, states the plain truth: “The rich and the powerful dictate to us what is true, legal and culturally acceptable. The main camp is surrounded by the who’s who of this city. The poor and dispossessed dared to move into their fancy neighborhood. When [the poor] are sleeping in subway stations, or under a bridge, it’s okay — the rich don’t have to face the failures of this system.

“We need change — real change. These people literally have nothing. Go ahead and bulldoze the camps. They will re-form somehow and someway — because there is no other choice!”