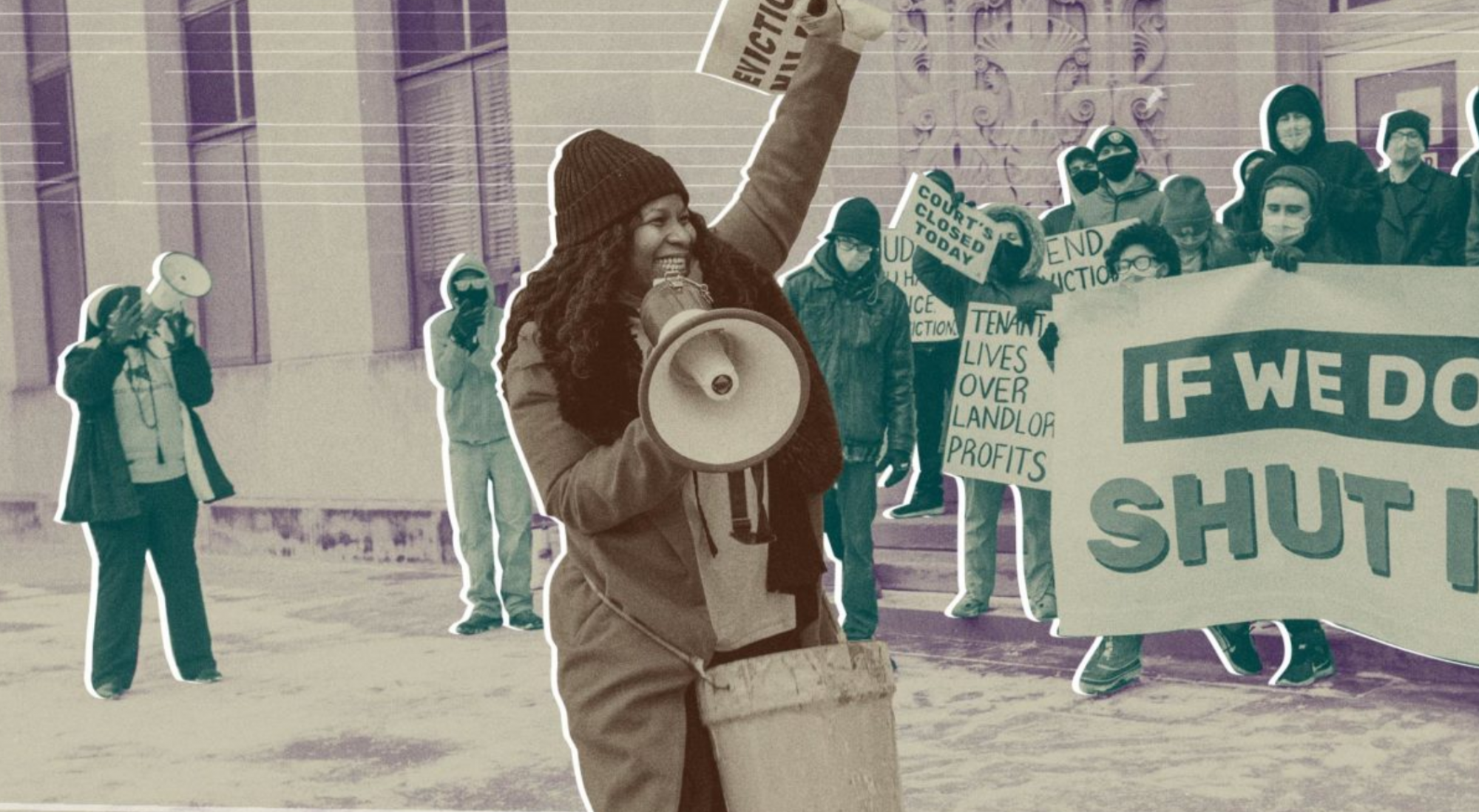 KC Tenants has secured passage of a tenant “bill of rights” and successfully blocked hundreds of evictions through civil action in the Kansas City, Missouri area.

Brandy Granados’s road to activism began in November 2018 when the heater in her Kansas City, Missouri, apartment exploded. She went without heat for two months during a winter that included multiple blizzards. She continued to pay rent, she said, but in response her landlord didn’t fix the heater; instead he tried to evict her and her children.

Desperate for help, she was connected with Tara Raghuveer, an area native who had returned after graduating from college with the goal of solving residents’ housing insecurity. “I figured I could either just sit there and be mad about my situation, or I could do something about it,” Granados said.

She was able to fight off the first eviction attempt in court, but the landlord removed her to retake possession of the house. She ended up in a homeless shelter for three months. The loss of her home has left her son suffering from anxiety and trauma.

By early 2019, she, Raghuveer, Diane Charity, and Tiana Caldwell would form the housing justice group KC Tenants. Since its formation, KC Tenants has changed the city’s political landscape, putting housing instability at the center of the conversation.

Raghuveer grew up in a wealthy white suburb outside of Kansas City. So when she returned in 2013 to study evictions for her senior thesis in college, “it burst this little bubble I had grown up within,” she said. The experience transformed the issue from an intellectual pursuit to “something I felt really compelled to take action around.”

I figured I could either just sit there and be mad about my situation, or I could do something about it.Brandy Granados, co-founder of KC Tenants

Charity has deep roots in the city and has been fighting slumlords and corporate landlords for decades. In 1991, her son was shot in the stomach and almost died, and it nearly prompted her to move, until she realized she wanted to stay and fight to make her neighborhood safer for everyone. She’s brought the same attitude to KC Tenants. “For every person we talk to, for every person that joins, we know we’re that much stronger,” she said. “There’s such strength in numbers and we can get this stuff done.”

KC Tenants held its first meeting of about a dozen people in February 2019. The next had 35 people, according to Raghuveer, the third attracted around 55, and the one after that had about 100 supporters gathered on the steps of City Hall to launch its housing policy platform. “We were off to the races,” Raghuveer said.

Since then, KC Tenants has become a force to be reckoned with, going toe to toe with landlords and lawmakers alike, most recently during the 2019 City Council and mayoral races. “There’s a really low bar for engaging in local elections because people just don’t turn out,” Raghuveer noted. KC Tenants aimed not just to increase voter turnout, but to get them activated on the issue of housing.

Members started showing up at candidate forums as a bloc, dressed in matching KC Tenants shirts with its recognizable bull logo. To get housing on the agenda, members disrupted the meetings and demanded that their questions about housing be answered. They sent their own housing questionnaire to every candidate, produced a voter guide based on the answers, and even held their own candidate forum.

They left a mark. Mayor Quinton Lucas, who made housing his key issue, beat nine other candidates in the primary and his opponent in the general. “They certainly played a role in not just my election, but in the City Council’s election,” Lucas said of KC Tenants. “I really appreciated their voice.” His interest in housing is personal: Lucas, who is  Black, grew up with a single mother in Kansas City who is a lifelong renter and was sometimes homeless. He and his sister are also lifelong renters, and his sister has struggled to hold on to her home. He compared that history to a white ex-girlfriend who bought a house with the help of her parents. Housing policy perpetuates inequality in the U.S., he noted. “I’ve known that since my childhood.”

The group’s first major win was the passage of a Tenant Bill of Rights in December 2019. At first, lawmakers assured KC Tenants that they would write a bill and get it passed. “We told them, ‘No, you won’t. You won’t write us anything, we’ll write it ourselves,’” Charity said. The City Council eventually passed a legislative package based on KC Tenants’ work that, among other things, institutes a right to working amenities like water and heat and the right to form tenant unions, and that bans discrimination based on disability, familial status, sexual orientation, gender identity, and other factors.

The final bill did not include some provisions KC Tenants pushed for, like a ban on source of income discrimination that protects people who use housing vouchers and a requirement that evictions only be allowed for a just cause. Lucas contends that the choice was between dropping those provisions or not getting anything passed at all. “I take value in the 90 percent of their ordinance that we were able to get passed,” he said.

And the Office of the Tenant Advocate, created under the Tenant Bill of Rights, has yet to receive what KC Tenants says is adequate funding or staffing. The office didn’t get a mention in Lucas’s first budget proposal and has so far only received about $328,000, a fraction of the more than a million dollars that KC Tenants has requested.

Fresh off their policy victories, KC Tenants had to face something it never saw coming: a pandemic that cost thousands of city residents their jobs and incomes and put their homes at risk. Need for rental assistance jumped abruptly. KC Tenants quickly created a hotline that has since received thousands of calls from tenants seeking help. It launched a mutual aid fund in March 2020 that has raised over $51,000. It’s also distributed literature to at least 15,000 tenants’ doors informing them of their rights.

And the group has staged protest after protest. Activists physically blockaded the courthouse multiple times to shut down the eviction proceedings inside and dialed into remote hearings to disrupt them. It even staged a car caravan along the shoulder of Interstate 70.

There’s such strength in numbers and we can get this stuff done.Diane Charity, co-founder of KC Tenants

It’s been a rocky road. Although members of KC Tenants think their actions played an instrumental role in securing an eviction moratorium at the start of the pandemic, the moratorium expired at the end of May. Eviction cases were allowed to proceed even under the moratorium issued by the Centers for Disease Control and Prevention. The group’s demand to cancel rent at the local and federal levels hasn’t been met.

“We got a dose of reality during the pandemic around how entrenched these systems are,” Raghuveer said, and that as the group takes on bigger and deeper problems, “it’s going to get consistently harder and harder for us to win.”

The frustration led to what KC Tenants called Zero Eviction January. Through a series of blockades and online protests throughout that month, the group delayed over 850 eviction hearings. It also rallied at judges’ homes to demand they stop hearing eviction cases. It was in the midst of that protest activity that Presiding Judge Dale Youngs signed an order halting the entire eviction process through Jan. 24.

The organization isn’t hitting pause after that significant effort. Members have decided to continue disrupting online eviction hearings with the goal of delaying them and buying time for tenants. “That was the biggest bang for the buck,” Raghuveer noted, as having a few people dial in can potentially disrupt hundreds of cases on a given day.

The group aims next to build its base by knocking on 500 doors each week, expanding its literature drops, and calling people who have faced recent eviction for a wellness check and invitation to join. The policy team is also working on a proposal to finance a housing trust fund—money that can be used to create and repair affordable housing—by redirecting funds from the police budget. The funding is one of Lucas’s campaign pledges that hasn’t yet been realized. Eventually the organization will get involved in the municipal elections in 2023—not just by interrogating candidates, but by running some of their own members for office.

Granados will be at the front of the fight. “I never thought I’d be a leader of anything,” she said. But she ended up helping to create an organization that has pushed the politics of her city in a new direction.