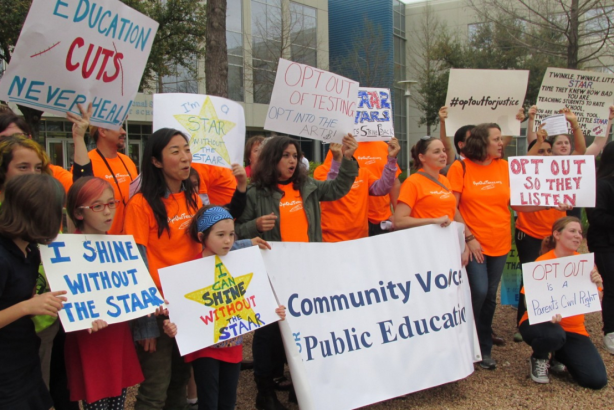 Above Photo: From houstonpublicmedia.org

There’s no official state policy on opting out, but the Houston school district says students won’t be disciplined for missing the exam.

This week, thousands of students in Texas public schools will take the state’s standardized exams. They’re called the “STAAR.” Except some parents want their children to boycott the exams.

Earlier this month, a few dozen people rallied outside of the headquarters of the Houston Independent School District.

They clanged a cow bell and belted chants like, “One, two, three, four, I am not a test score.”

The rally was organized by an advocacy group called Community Voices for Public Education. They protested what they see as the negative impact of standardized testing.

She plans to keep her fourth grade daughter home from school during testing time. It’s the first time they are opting out of testing in HISD.

“Because the STAAR tests are very limited in their scope and the kids are not getting a good education out of this. It’s detrimental to their overall education,” Verdier added.

This year organizers with the local opt out movement expect more parents like Verdier to join the boycott.

They’ve already gotten a new major ally: the Houston Federation of Teachers. The union endorsed parent’s right to opt their children out of standardized exams.

“Parents have recognized that much of the curriculum in HISD and across the districts in Texas have been diluted,” said Daniel Santos, a leader with the union.

“Many are forced to teach to the test, so we understood, we sympathized with parent’s concerns, so we wanted to demonstrate that support, that solidarity with their right to opt out.”

But the Houston school district has a new policy that states students who don’t take the test won’t be subject to discipline at school.