Above Photo: A Yemeni Shiite man holds his weapon and a flag with an Arabic inscription reading ‘Disgrace is far from us,’ as he takes part in a religious procession held by Houthi rebels to mark the first day of Ashura. Photo: Hani Al-Ansi/dpa

We are the Houthis and we’re coming to town. With the spectacular attack on Abqaiq, Yemen’s Houthis have overturned the geopolitical chessboard in Southwest Asia – going as far as introducing a whole new dimension: the distinct possibility of investing in a push to drive the House of Saud out of power.

Blowback is a bitch. Houthis – Zaidi Shiites from northern Yemen – and Wahhabis have been at each other’s throats for ages. This book is absolutely essential to understand the mind-boggling complexity of Houthi tribes; as a bonus, it places the turmoil in southern Arabian lands way beyond a mere Iran-Saudi proxy war.

Still, it’s always important to consider that Arab Shiites in the Eastern province – working in Saudi oil installations – have got to be natural allies of the Houthis fighting against Riyadh.

Houthi striking capability – from drone swarms to ballistic missile attacks – has been improving remarkably for the past year or so. It’s not by accident that the UAE saw which way the geopolitical and geoeconomic winds were blowing: Abu Dhabi withdrew from Crown Prince Mohammad bin Salman’s vicious war against Yemen and now is engaged in what it describes as a  “peace-first” strategy.

Even before Abqaiq, the Houthis had already engineered quite a few attacks against Saudi oil installations as well as Dubai and Abu Dhabi airports. In early July, Yemen’s Operations Command Center staged an exhibition in full regalia in Sana’a featuring their whole range of ballistic and winged missiles and drones.

The situation has now reached a point where there’s plenty of chatter across the Persian Gulf about a spectacular scenario: the Houthis investing in a mad dash across the Arabian desert to capture Mecca and Medina in conjunction with a mass Shiite uprising in the Eastern oil belt. That’s not far-fetched anymore. Stranger things have happened in the Middle East. After all, the Saudis can’t even win a bar brawl – that’s why they rely on mercenaries.

The US intel refrain that the Houthis are incapable of such a sophisticated attack betrays the worst strands of orientalism and white man’s burden/superiority complex.

The only missile parts shown by the Saudis so far come from a Yemeni Quds 1 cruise missile. According to Brigadier General Yahya Saree, spokesman for the Sana’a-based Yemeni Armed Forces, “the Quds system proved its great ability to hit its targets and to bypass enemy interceptor systems.” 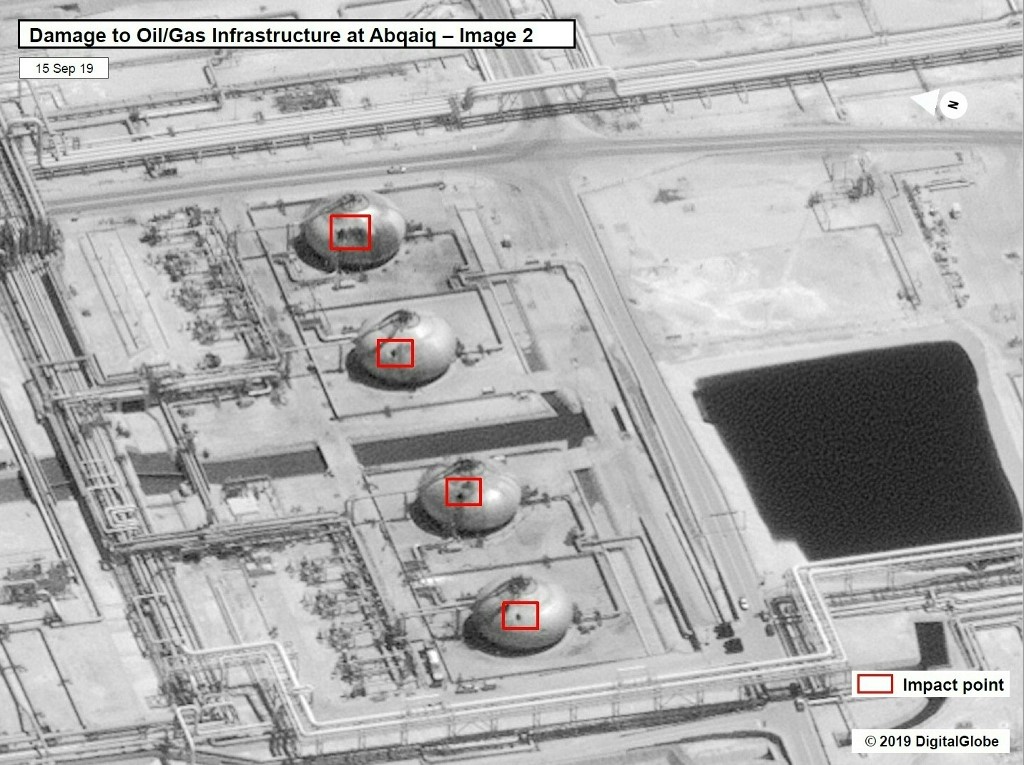 This satellite overview handout image obtained September 16, 2019 courtesy of the US Government shows damage to oil/gas infrastructure from weekend drone attacks at Abqaig on September 15, 2019 in Saudi Arabia. – Drone attacks on key Saudi oil facilities have halved crude output from OPEC’s biggest exporter, catapulting oil prices by the largest amount since the first Gulf War. The crisis has focused minds on unrest in the crude-rich Middle East, with Tehran denying Washington’s charge that it was responsible.Brent oil prices leapt 20 percent on Monday to chalk up the biggest intra-day daily gain since 1991. (Photo by HO / US Government / AFP) / RESTRICTED TO EDITORIAL USE – MANDATORY CREDIT “AFP PHOTO /US GOVERNMENT/HANDOUT ” – NO MARKETING – NO ADVERTISING CAMPAIGNS – DISTRIBUTED AS A SERVICE TO CLIENTS

Houthi armed forces duly claimed responsibility for Abqaiq: “This operation is one of the largest operations carried out by our forces in the depth of Saudi Arabia, and came after an accurate intelligence operation and advance monitoring and cooperation of honorable and free men within the Kingdom.”

Notice the key concept: “cooperation” from inside Saudi Arabia – which could include the whole spectrum from Yemenis to that Eastern province Shiites.

Even more relevant is the fact that massive American hardware deployed in Saudi Arabia inside out and outside in – satellites, AWACS, Patriot missiles, drones, battleships, jet fighters – didn’t see a thing, or certainly not in time. The sighting of three “loitering” drones by a Kuwaiti bird hunter arguably heading towards Saudi Arabia is being invoked as “evidence”. Cue to the embarrassing picture of a drone swarm – wherever it came from – flying undisturbed for hours over Saudi territory.

UN officials openly admit that now everything that matters is within the 1,500 km range of the Houthis’ new UAV-X drone: oil fields in Saudi Arabia, a still-under-construction nuclear power plant in the Emirates and Dubai’s mega-airport.

My conversations with sources in Tehran over the past two years have ascertained that the Houthis’ new drones and missiles are essentially copies of Iranian designs assembled in Yemen itself with crucial help from Hezbollah engineers.

US intel insists that 17 drones and cruise missiles were launched in combination from southern Iran. In theory, Patriot radar would have picked that up and knocked the drones/missiles from the sky. So far, absolutely no record of this trajectory has been revealed. Military experts generally agree that the radar on the Patriot missile is good, but its success rate is “disputed” – to say the least. What’s important, once again, is that the Houthis do have advanced offensive missiles. And their pinpoint accuracy at Abqaiq was uncanny. 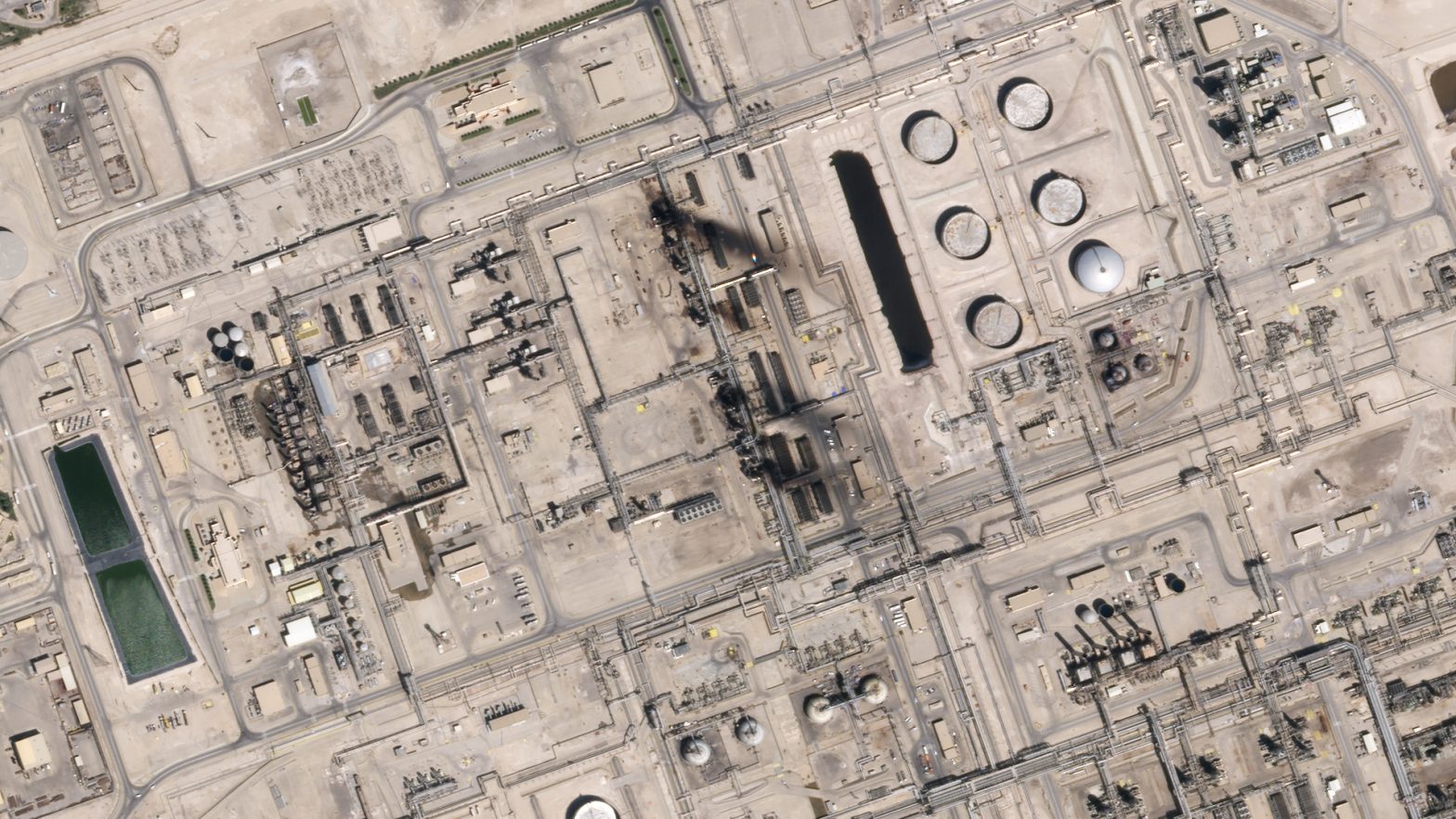 For now, it appears that the winner of the US/UK-supported House of One Saudi war on the civilian Yemeni population, which started in March 2015 and generated a humanitarian crisis the UN regards as having been of biblical proportions, is certainly not the crown prince, widely known as MBS.

Listen to the general

Crude oil stabilization towers – several of them – at Abqaiq were specifically targeted, along with natural gas storage tanks. Persian Gulf energy sources have been telling me repairs and/or rebuilding could last months. Even Riyadh  admitted as much.

Blindly blaming Iran, with no evidence, does not cut it. Tehran can count on swarms of top strategic thinkers. They do not need or want to blow up Southwest Asia, which is something they could do, by the way: Revolutionary Guards generals have already said many times on the record that they are ready for war.

Professor Mohammad Marandi from the University of Tehran, who has very close relations with the Foreign Ministry, is adamant: “It didn’t come from Iran. If it did, it would be very embarrassing for the Americans, showing they are unable to detect a large number of Iranian drones and missiles. That doesn’t make sense.”

Marandi additionally stresses, “Saudi air defenses are not equipped to defend the country from Yemen but from Iran. The Yemenis have been striking against the Saudis, they are getting better and better, developing drone and missile technology for four and a half years, and this was a very soft target.”

A soft – and unprotected – target: the US PAC-2 and PAC-3 systems in place are all oriented towards the east, in the direction of Iran. Neither Washington nor Riyadh knows for sure where the drone swarm/missiles really came from.

Readers should pay close attention to this groundbreaking interview with General Amir Ali Hajizadeh, the commander of the Islamic Revolutionary Guard Corps Aerospace Force. The interview, in Farsi (with English subtitles), was conducted by US-sanctioned Iranian intellectual Nader Talebzadeh and includes questions forwarded by my US analyst friends Phil Giraldi and Michael Maloof and myself.

Explaining Iranian self-sufficiency in its defense capabilities, Hajizadeh sounds like a very rational actor. The bottom line: “Our view is that neither American politicians nor our officials want a war. If an incident like the one with the drone [the RQ-4N shot down by Iran in June] happens or a misunderstanding happens, and that develops into a larger war, that’s a different matter. Therefore we are always ready for a big war.”

In response to one of my questions, on what message the Revolutionary Guards want to convey, especially to the US, Hajizadeh does not mince his words: “In addition to the US bases in various regions like Afghanistan, Iraq, Kuwait, Emirates and Qatar, we have targeted all naval vessels up to a distance of 2,000 kilometers and we are constantly monitoring them. They think that if they go to a distance of 400 km, they are out of our firing range. Wherever they are, it only takes one spark, we hit their vessels, their airbases, their troops.”

On the energy front, Tehran has been playing a very precise game under pressure – selling loads of oil by turning off the transponders of their tankers as they leave Iran and transferring the oil at sea, tanker to tanker, at night, and relabeling their cargo as originating at other producers for a price. I have been checking this for weeks with my trusted Persian Gulf traders – and they all confirm it. Iran could go on doing it forever.

Of course, the Trump administration knows it. But the fact is they are looking the other way. To state it as concisely as possible: they are caught in a trap by the absolute folly of ditching the JCPOA, and they are looking for a face-saving way out. German Chancellor Angela Merkel has warned the administration in so many words: the US should return to the agreement it reneged on before it’s too late.

And now for the really hair-raising part.

The strike at Abqaiq shows that the entire Middle East production of over 18 million barrels of oil a day – including Kuwait, Qatar, United Arab Emirates and Saudi Arabia – can be easily knocked out. There is zero adequate defense against these drones and missiles.

Here’s what happened at the press conference after the Ankara summit this week on Syria, uniting Presidents Putin, Rouhani and Erdogan.

Question: Will Russia provide Saudi Arabia with any help or support in restoring its infrastructure?

President Putin: As for assisting Saudi Arabia, it is also written in the Quran that violence of any kind is illegitimate except when protecting one’s people. In order to protect them and the country, we are ready to provide the necessary assistance to Saudi Arabia. All the political leaders of Saudi Arabia have to do is take a wise decision, as Iran did by buying the S-300 missile system, and as President Recep Tayyip Erdogan did when he bought Russia’s latest S-400 Triumph anti-aircraft system. They would offer reliable protection for any Saudi infrastructure facilities.

President Vladimir Putin: It is up to them to decide [laughs].

In The Transformation of War, Martin van Creveld actually predicted that the whole industrial-military-security complex would come crumbling down when it was exposed that most of its weapons are useless against fourth-generation asymmetrical opponents. There’s no question the whole Global South is watching – and will have gotten the message.

Now we are entering a whole new dimension in asymmetric hybrid war.

In the – horrendous – event that Washington would decide to attack Iran, egged on by the usual neocon suspects, the Pentagon could never hope to hit and disable all the Iranian and/or Yemeni drones. The US could expect, for sure, all-out war. And then no ships would sail through the Strait of Hormuz. We all know the consequences of that.

So we’re back to the realistic bottom line, which has been stressed by not only Moscow and Beijing but also Paris and Berlin: US President Donald Trump gambled big time, and he lost. Now he must find a face-saving way out. If the War Party allows it.