How 2,000 People Of Darker Skin Were Used As Barriers At Gunpoint During The Great Mississippi Flood Of 1927

When Hurricane Katrina pounded the southeast of New Orleans on August 29, 2005, the resultant flooding affected Greater New Orleans and claimed some 1,464 lives leaving damage worth $70 billion.

The haunting images of Black babies, mothers and males stuck on rooftops and the support services’ poor handling of the coordination and relief effort where Black people were left to drown, starve or die of dehydration or from lack of medical care exposed the U.S. capitalist government’s disregard for Negroid life and the needs of its people.

Tens of thousands of people, mostly Black, lost the little they had. The National Guard when it came was rather keen to criminalize the victims and not to provide relief. At all levels, the government covered up the death toll and other evidence of its culpability.

It’s little wonder then that White New Orleans has recovered from Hurricane Katrina, 14 years on thanks to funding and white privilege.

But if Katrina was a bad dream, there’s a 1927 nightmare many folks are ignorant of also involving a deluge and the U.S. government’s callousness when it comes to African-American people. 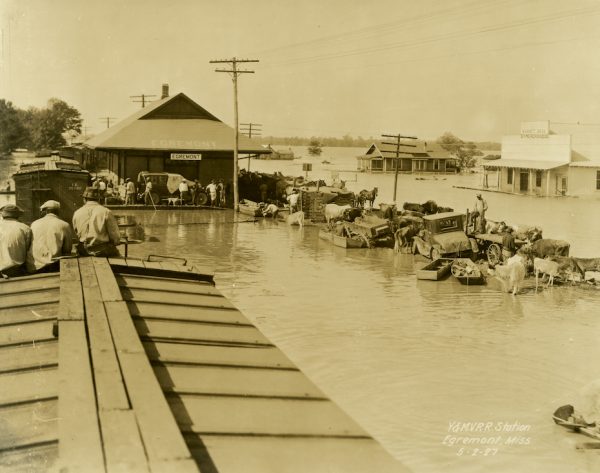 The Great Mississippi Flood of 1927, a series of floods lasting several months – deluged 27,000 square miles in seven states. After months of torrential rain, levees burst from Illinois to Louisiana. An unknown number died—certainly in the thousands. Many were buried beneath tons of river mud or washed out into the Gulf of Mexico. Hundreds of thousands lost their homes; more than 325,000 people, most of them Blacks, lived in Red Cross camps for as long as four months.

Despite chattel slavery being outlawed, Black freedmen were still politically disenfranchised, and a social order based on debt servitude – sharecropping – was established.

“Control of the wild waters of the Mississippi is key to the Gulf ports of Louisiana and to commercial river traffic. The river and its tributaries reach into more than 40 percent of the continental United States.”

As Barry documents in his book, the interests of the banks and planters determined “flood control” policies along the Mississippi. Barry also describes engineering decisions that led to the levee system, which only worsened the inevitable natural catastrophe. 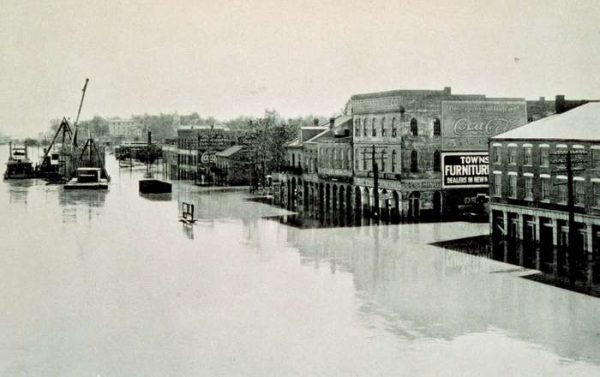 “The black people who built the hundreds of miles of levees were at first slaves, then mainly sharecroppers and convicts. The levee work camps were isolated, barbaric places where the pay was even less than for picking cotton and where white foremen could literally get away with murder. During a flood in 1912, a Mississippi engineer who ran out of sandbags ordered several hundred black convicts to lie down on top of a levee while the water splashed over them. The local press suppressed the story, but the New York Times reported this horror as “brilliant.””

So we become aware that those who built the levees were poorly remunerated and the materials to be used were also in short supply such that Black lives have to be endangered to serve as a barrier.

Barry continues: “In 1927 as the rivers spilled over, black work gangs were rounded up to toil in dangerous and ultimately pointless attempts to stay the water. In Mounds Landing, Mississippi, north of the main Delta town of Greenville, over 2,000 black men were forced at gunpoint to fill and throw sandbags onto the levee. On April 21, the levee was breached, releasing water with a force greater than Niagara Falls. Many in the work gangs who were reinforcing the levee were swept into the torrent. The official account, by a National Guard officer at the site, stated, “No lives were lost among the Guardsmen.”

“The deluge swept away everything in its path. To prevent his tenants from fleeing the desolation, one planter locked them in barns and cotton gin houses. Black people who found shelter in public buildings were driven back into the waters at gunpoint. Thousands of flood victims fled to or were forcibly driven to the narrow crowns of the levees, bringing with them nothing but their debts to the planters. The Percy family, the main planters in Greenville, prevented blacks from boarding barges brought to evacuate the homeless masses for fear of losing their cheap labor force. In the Greenville area alone, 5,000 black people were forced to take shelter in warehouses, stores and similar facilities, while up to 13,000 more lived on an eight-mile-long levee,” Barry records.

In New Orleans, with its crucial banks and port facilities, newspapers refused to print flood warnings. In the end some 10,000 impoverished people—mainly trappers, fishermen and bootleggers—were displaced, and few ever got more than a few dollars of compensation.

To make matters worse, “the federal government didn’t contribute a dime of direct aid to the thousands of flood victims, despite a record budget surplus. The Red Cross established racially segregated camps in the flood zones. Black families lived in floorless tents in the mud without cots, chairs or utensils, eating inferior rationed food. Sometimes forced to work on the levees without pay, black men had to wear tags identifying that they were laborers in order to receive rations, and to show which plantation they “belonged to.” Women with no working husband did not get supplies unless they had a letter from a white man.

“Policing the camps, the National Guard supervised the workers, whipping and beating the men. At least one black woman was gang-raped and killed by Guardsmen. Typhoid, measles, mumps, malaria and venereal diseases ran rampant among destitute tenant farmers and mill workers already weakened from illnesses endemic to poverty, such as tuberculosis and pellagra. The Chicago Defender (4 June 1927) even reported that “those who die are cut open, filled with sand then tossed into the Mississippi River.” Such horrors were stark proof that the poisonous legacy of chattel slavery still infected the land some 60 years after the Civil War.”

Myles McMurchy of Dartmouth College in 2016 using newspaper reports noted that The Great Mississippi Flood of 1927 destroyed nearly 100,000 homes and displaced close to 637,000 people in Arkansas, Mississippi, and Louisiana.

While the Act of God namely the flood claimed African-American lives and led to one of the largest fundraising drives in American history, the kicker is what the Calvin Coolidge regime and the Red Cross did against people from that stock.

“The Red Cross, along with Secretary of Commerce Herbert Hoover, deliberately concealed the abuses that black refugees suffered in Red Cross camps in order to obtain donations for the rebuilding effort. Leading black activists sought to expose the abuses but the media campaign led by Hoover and the Red Cross characterized the rebuilding effort as one of racial harmony and triumphant success. Hoover will then use his mobilization effort to earn the presidency a year later.”

The 1927 Mississippi River Flood became not only one of America’s greatest natural disasters, but also one of its greatest cover-ups.

Most hit was Greenville, Mississippi, in which 90 percent of refugees were black. Greenville’s relief camp spawned both the worst of the Red Cross’ abuses and the greatest of Hoover’s media tactics. Even while black flood refugees in Greenville wrote clandestine letters to the Defender detailing the Red Cross’ malpractice, Hoover and the Red Cross told a different story.

In the end, Hoover’s media campaign preserved his humanitarian legacy by hiding Red Cross racism from the nation at large. Despite the Chicago Defender’s relentless efforts to bring attention to the Red Cross abuses, the paper ultimately did little to tarnish Hoover’s reputation.

However, the Great Flood was a turning point in race relations as by revealing that in 1927 slavery remained a threat in Greenville, black residents left the South for northern cities such as Chicago. Northern Blacks also partnered their southern brethren in mass protest resulting in the 1931 Scottsboro Boys trial.