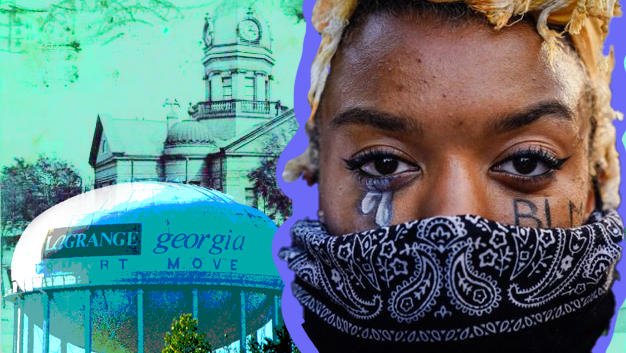 A court victory changed racist municipal policies in this small Georgia city, but will local government actually amend past harm?

Anton Flores thought it would be simple to help someone get their water turned back on.

“I had a single mom, who was undocumentable, whose utilities had been cut off, and she came to me,” Flores, an immigration activist in the small Georgia city of LaGrange, said. He helped new immigrants navigate unfamiliar systems frequently.

He figured all they had to do was come up with the money—so they did. Together, they went down to the municipal utility office. But it turned out, getting utilities turned on in LaGrange was a lot more complicated than having the money to pay.

In fact, for the undocumented woman in question, it was impossible: with no social security number, the municipal clerk denied her request.

As Scalawag first reported in 2019, residents had long struggled against the lasting culture of racial repression in LaGrange to gain access to the most basic services—water and electricity. Requiring social security numbers for immigrants was just one piece of LaGrange’s unusually damaging combination of practices, which also prevented people with court debt from accessing utilities.

In October 2020, the City of LaGrange reached a settlement with plaintiffs in a lawsuit filed in 2017 that alleged that the city’s utility policies violated the Fair Housing Act by discriminating against Black and Latinx renters and homeowners. And now, Black and Brown residents of LaGrange are celebrating a victory that resulted from more than a decade of community organizing and legal wrangling.

Before this legal win, water shutoffs and the threat of losing utilities were a standard part of the lives of low-income people in the city. Rather than creating a safety net for its poorest residents, LaGrange had created a barbed wire fence—a set of policies designed to keep these residents either out of LaGrange or trapped in substandard housing.

Now, at least on paper, those practices are over, thanks to a coalition of Black- and immigrant-led organizations, individuals, legal support, and media coverage.

“This settlement brings a whole new level of housing security to people who didn’t previously have it,” said Atteeyah Hollie of the Southern Center for Human Rights, one of the lawyers representing the plaintiffs. “It opens up a lot of opportunities for people who felt like they were trapped in unstable or unsafe housing situations.”

The story of LaGrange serves as a case study of how municipal policies can quietly reinforce structural racism, even when current leaders try to distance themselves from explicit racist violence in the past. LaGrange was once the site of lynchings and citywide coverups. In 2017, Police Chief Louis Dekmar issued a public apology for a 1940 lynching of a 16-year-old boy. Still, the modern racist utility policies continued, and received far less attention both inside and outside the community than the chief’s attempt to redress past racism.

The victory in the utility settlement also serves as an example of successful community organizing in a segregated Southern city. Without building a complex coalition, and seeking media attention over a long period of time, activists said, LaGrange’s quiet repression could have gone on indefinitely.

When I first traveled to LaGrange, I was struck by how “normal” it was: a downtown square with a courthouse and antique shops, Waffle House and Super 8 strips to all sides, factories south of town making Kia cars and Duracell batteries. It was every-small-Southern-city, the kind where you can see stars at night. The streets were quiet and there were two sides of town—white and Black, which correlated with rich and poor. Folded into the white side were pockets where Latinx immigrants lived, many of whom worked in the white folks’ homes.

Part of all this “normalcy” was the same secret that most cities keep: that of racial repression, which has been a part of the culture for so long it appears like the cut grass on the white folks’ lawns, unremarkable.

As is often the case, the repression is built into the fine print of city policy. As a city, LaGrange runs itself like a business: it’s a municipal monopoly in which utility charges, fines and fees make up a large portion of the “profit,” and the residents of the city are customers.

It is the details of the city’s approach to utility charges that led to the lawsuit, filed by National Immigration Law Center (NILC), the Southern Center for Human Rights, and Relman Colfax PLLC in 2017 on behalf of ten plaintiffs: the Georgia State Conference of the NAACP, the Troup County Chapter of the NAACP, Project South, and seven affected city residents. As we reported in Scalawag, the plaintiffs alleged two policies unfairly burdened the city’s residents.

One of the policies was nearly unheard of to all involved: the city had made a practice of rolling over unpaid court fines and fees from the municipal court onto residents’ utility bills, threatening to cut off utilities over these unpaid (and unrelated) bills.

Black residents, who make up 48 percent of the LaGrange population, were disproportionately targeted for the court debt policy, accounting for 90 percent of cases in which court debts were rolled over onto utility bills.

The other policy is more commonplace, though in some ways even more confounding: the city denied utility counts altogether to people without social security numbers, which meant that immigrants who were not citizens or green card holders were hard-pressed to even open an account in their name.

The net effect of both policies was to make it difficult for immigrants and Black people to rent homes and maintain utility accounts in LaGrange.

The case went to the 11th Circuit Court of Appeals, where a three-judge panel sided with the plaintiffs and sent the case back to a trial court for adjudication. That resulted in a settlement in which the city agreed to rescind both policies, inform residents of the policy changes publicly, and grant the plaintiffs a $450,000 payment. The city’s lawyer, Jeff Todd, hasn’t responded to a request for comment from Scalawag, but told the LaGrange Daily News that the city chose to settle the lawsuit rather than continue to pay legal fees.

“Regardless of the litigation, access to basic utilities is a matter of basic human rights. There should not be a need for people to go to court and litigate,” said Azadeh Shahshahani of Project South, which was one of the plaintiffs in the case.

“They did everything that they possibly could to drag their feet just so that they wouldn’t be doing something very basic, which is to provide people access to utilities.”

Anton Flores, the immigration activist and former LaGrange resident, was among the first to raise concerns about immigrants unable to open utility accounts in the city after he tried and failed to help the undocumented woman.

His activism on the issue began by simply accompanying other undocumented immigrants to the city’s utility office to try to open accounts and advocating for them.

“Accompaniment was important from the very beginning,” said Flores. When accompaniment and one-on-one advocacy didn’t work, he began to advocate more loudly for a change. And he met Ernest Ward of the Troup County NAACP, who told Flores about the court debt policy.

“That began the political snowball, the state NAACP, the human rights organizations, the lawyers,” said Flores. “We didn’t take it up to a legal challenge until we had this Black-Brown coalition.”

Ernest Ward agreed with Flores that Black-Brown coalition building in LaGrange, as well as the involvement of statewide and national groups, and media attention, were key to the eventual victory.

Making a moral appeal hadn’t worked, and neither had political pressure—the city council declined to take action on either the court debt or the social security number policy  after their inequities were brought to its attention. And because of LaGrange’s culture of silence, most people affected by the policies were afraid to come forward and didn’t directly benefit from the lawsuit.

“They weren’t in a position financially to fight for themselves,” Ward said. He said the city’s practices are as much about keeping people in their place as they are about money—controlling people’s ability to live with water and power keeps people afraid to speak out. The city never made much money off of its court debt policy, and made no money at all by denying utilities to undocumented people.

Only when it became more expensive to continue litigation than to settle did the city take action. In other words, there was no moral awakening or anti-racist breakthrough in LaGrange, a fact that continues to irk the plaintiffs.

“That’s what makes this fight so critical, and that’s why the establishment does what they do.”

The fact that a few people who were victimized can benefit financially from the litigation is a big win. “That settlement for those seven individuals was life-changing,” he said.

But hundreds of other people affected will never see a dime—and the fear of repercussions for speaking out about daily indignities in LaGrange remains.

In November, the city posted the change in policies to its website and Facebook page, and changed its application forms.

“It’s one thing to say the law has changed, it’s another thing to say there is truly equitable access now,” said Flores. He knows of at least one person who’s opened a utility account without a social security number. But local organizers will continue to be vigilant, and to provide accompaniment where possible.

Shahshahani of Project South said her organization will now use the example of this case to continue to pursue change in other Southern cities. While the court debt policy appears to be unique to LaGrange, the policy of denying utility accounts to people without social security numbers is widespread, and Project South has been in contact with 19 other municipalities that had similar practices as of 2019. Even if it takes litigation, she and other activists still hope to make an appeal based on human rights.

He said the work, in part, is to keep telling ourselves and each other this liberating truth.