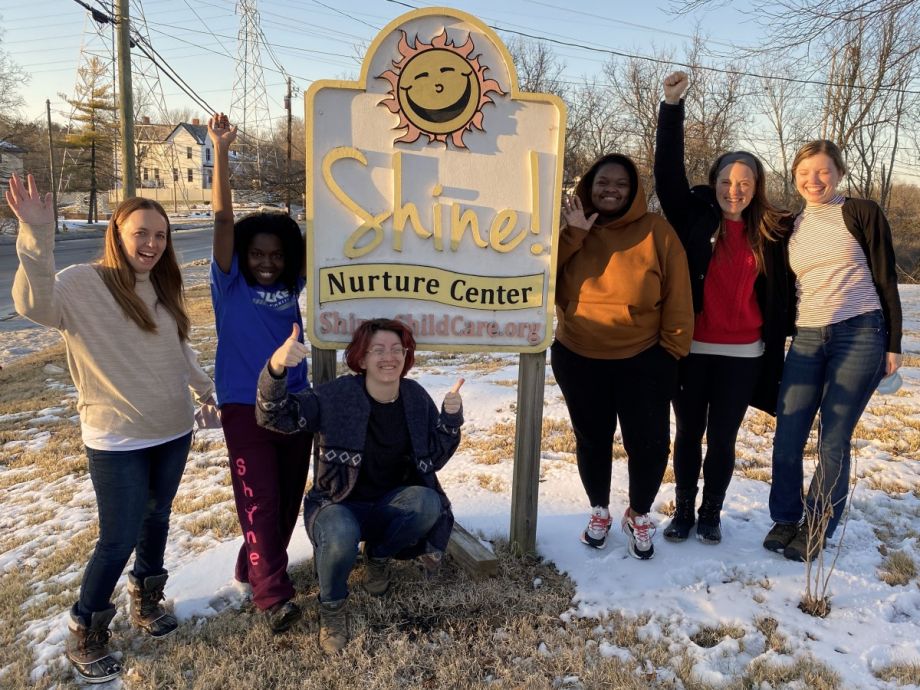 How A Cincinnati Preschool Became Worker-Owned

Thanks To Funding And Support From Co-Op Cincy, Five Workers At Shine Nurture Center Paid $1,500 To Buy Into The Business.

Mt. Airy, Ohio – Katie McGoron founded Shine Nurture Center — a childcare and preschool in Mt. Airy, Ohio, a suburb of Cincinnati — in 2015. She envisioned a small, closely knit childcare center where kids would play outside and eat healthy food. That’s exactly what she built over the last seven years. But when she decided to go back to school and start a new phase of her life, she did something unexpected. Rather than sell her business to the highest bidder, she sold it to five of her workers, turning it into a worker cooperative.

The transition process concluded last month when ownership was officially transferred from McGoron to Shine workers, thanks in large part to the help of Co-op Cincy.

An incubator for worker-owned businesses, Co-op Cincy led Shine through its transformation. “Katie met with us back in 2016 because she felt like a co-op was the best way to grow her childcare center, but she had just started and wasn’t breaking even yet, so Shine wasn’t in a place to be ready,” explains Ellen Vera, Co-op Cincy’s director of co-op organizing.

The time was right, however, when Co-op Cincy teamed up with community wealth cooperative Seed Commons in Fall 2020 to launch a $3 million fund for businesses to become worker owned in the wake of the pandemic and its corresponding uptick in entrepreneurs retiring. With money in hand to help cover the costs of buying in for workers as well as to make loans to newly transitioned businesses, Co-op Cincy put out a call and McGoron responded.

Shine was one of six businesses selected from 12 applications at the end of 2020. The cohort’s work began in January 2021 with an education series that consisted of three webinars and twice-monthly meetings between Co-op Cincy and each business. “This is really to help them assess if it truly makes sense for their business and to get at what the true value is of the company,” Vera explains. “We conduct an informal valuation to get a sense of what the company is worth and, from there, it’s kind of a go or no-go situation.”

McGoron went for it, moving on to the next phase, which included signing a letter of intent and going through a deeper, formal valuation process. “We do true due diligence to map out what the transition would look like, how it would be structured, how knowledge will get passed on,” Vera says. “The process looks pretty much the same for each business, but the transition plans are unique. Some owners are selling and staying on while others are selling and moving on.”

When Co-op Cincy transitions a business, they like to work with at least three worker-owners, but the goal is to get as many as possible and the ability to expand that number over time is built into the company’s bylaws. “Our main goal is to create an economy that works for everyone. We believe that worker ownership is an important way for our economy to work for more folks,” Vera adds. “In addition to having more control over their work and work lives, they can also share in the wealth that’s being created and that’s a form of wealth building that many people otherwise don’t have the opportunity to access.”

In addition to helping businesses like Shine transition to being worker owned, Co-op Cincy supports the startup of worker-owned businesses in the greater Cincinnati area. So far, they’ve loaned $366,000 to co-op businesses since 2011 and have trained over 1,300 people about worker ownership each year. Co-op Cincy’s work has led to the employment of 89 people throughout their co-op network, 71% of which are women and 67% of which are people of color.

At Shine, the cost for workers like Beth Heeg to buy in at Shine came to $1,500. Heeg started with Shine in February 2021, and McGoron had let her know in the interview process that a co-op was on the horizon. “That was an incentive for joining Shine,” Heeg says. When it came time to buy in last summer, “our group was really diverse in terms of the ability to purchase in,” she adds. “Co-op Cincy made it accessible by offering loans to individuals to buy in so that they could pay a portion of it to get their foot in the door and pay back the rest later.”

After everyone agreed on the buy-in price in June, Shine and Co-Op Cincy put together Shine’s new operation plans, wrote up the bylaws, and nailed down their specific transition plan. All of that was completed by October, but the licensing element turned out to be a bit of a snag. By the end of January 2022, they had worked everything out: McGoron would continue to own the building and lease it to Shine while Shine would continue using the old business’s license until their own comes through.

“As a childcare agency, we’re never going to have a huge profit. We’re not trying to become millionaires,” Heeg says. “Right now, the return is going to be less because we’re going through the expensive processes of licensing. But over time it will be easier … to see quicker returns.”

Plus, the parents have been supportive, even going as far as drumming up interest around creating some kind of PTO that would be involved with the co-op as well. “In general, this type of succession is really an option for owners who care about preserving the legacy of the people who helped build their business,” Vera adds. “It’s not charity. It’s getting fair market value for your business. It’s a real option for owners who want to transition out of their businesses, especially small ones since there’s usually not a ton of buyers out there.”