Above Photo: Dallas 6 March for Freedom

Editor’s note: Shandre Delaney’s son, Carrington Keys, was released from prison on May 15, 2018, after serving 20 years. He spent 10 of those years in solitary confinement.  During that time “in the hole,” out of fear for his life, Shandre, a once shy woman, began advocating for him. This is her story.

In 1999, when my son was arrested for robbery at age 18, I cried nonstop for a week. I felt a significant loss, like death, because I knew he was about to be devoured by a system that was built specifically for him, a young black man. I was uncertain how he would fare in that environment or if he would make it out. What I didn’t know is that he would be gone for nearly 20 years. 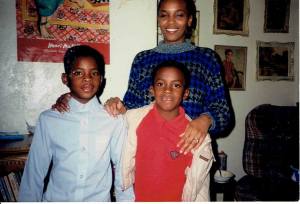 Carrington (red shirt) with his brother

I had warned my juvenile son time and time again that the prisons being built were waiting to be filled with the bodies of him and his friends. I warned them they did not want to do anything that would cause them to be in prison.

It was common sense as there had been a surge in the building of prisons and a push for mandatory laws in the state of Pennsylvania during the 1980s and 1990s.

Also, during this time, which is very important, there was a loss of income in the state of Pennsylvania from manufacturing jobs, steel and coal mining. This was the substance and economy of the rural communities in Pennsylvania. They found a replacement economy: a human cash crop, as it were, in the warehousing of bodies.

In my opinion, they use black and brown bodies of our family members to create jobs for white men who would otherwise be poor like those that filled the prisons. The urban cities provide a constant supply and job security to the rural towns of Pennsylvania.

When my son arrived at prison, I had the normal fears of him being very young in an adult prison around older men who may be predators. I also had fears that he would be caught up between gangs. I soon learned that the most notorious gang in the prison system was not the Crips and Bloods but the C’s and the O’s as I liked to call the gang-like corrections officers.

I learned, the COs, just like police, are given carte blanche to harm and sometimes even kill prisoners. They have impunity and a strong union to back up any offenses of which they are found guilty. My son learned to defend himself against the verbal and physical abuse of the guards by studying and practicing law. He often stood up for himself and others by filing complaints and lawsuits.

This behavior was not welcomed, and he became a target. When he became a target, he was thrown into solitary confinement and subjected to some of the most cruel and inhumane treatment one could imagine. I received letters from him that described being starved. They spit and put urine in his food and beverages. At one point, he even found glass in his meal.

During the time he was in solitary, out of fear for his life, I began advocating for him. As a mom who is very attached to her children, I was in a constant state of anxiety. This feeling lasted for nearly the entire 10 years that my son was in “the hole.” I self-medicated by drinking sometimes just so I could sleep and not think about the horrors of what was happening to my son. By nature, I am a shy and subdued person, and I was often afraid to pick up the phone to call people to complain.

What pushed me was the thought of me being in that cell and no one standing up for me. I knew if my son could endure what he was going through, even at the threat of losing his life, then I could be brave enough out here on the streets. Once I began advocating for my son, I found that many others were subjected to the same cruel and inhumane treatment. There are no limits or bounds in this cruel behavior. Those who are mentally ill, disabled and women fare the same at the hands of the guards. I was forced into being an advocate for many people because I could not turn my back on those who sent letters.

The elephant in the room and the often-unstated fact—-that my son and the bodies of others are being used to fund an economy—cannot be mentioned enough. Another unstated fact (that also is common knowledge) is the huge concentration of hate groups in Pennsylvania according to the Southern Poverty Law Center, and many of those same areas coincide with where prisons are. I have received reports from prisoners, including my son, about guards informing them that they belong to some of these groups. With impunity, they torture and even kill prisoners for no other reason than the color of their skin, their religion or sexual preference. We live in a society that believes prisoners deserve to be punished with no rehabilitation and that they are less than human.

My journey began with making phone calls, which led to speaking publicly, sharing my son’s story at social justice forums and conferences, judicial committees and government officials. Now, my once timid voice speaks for the voiceless behind the walls.

These advocacy actions all started by my son sending me letters and telling me to contact other prisoner’s family members. Whatever prison he was at, he would always have someone contact me if there was something going wrong. In turn, I would contact other family members to alert them. It was heart-wrenching to know the level of deprivation prisoners had to endure. I have received letters on toilet paper, letters written with a fingernail onto carbon paper because they would sometimes deny the prisoners writing materials to keep them from reaching us. Prisoners would use whatever they could find to get the word out to us.

Most of the work I do is under the banner of Human Rights Coalition Fed-Up! a group that prisoners founded and family members on the outside operate. While my son was incarcerated, I became a member.

In HRC, I met two women who have become like family to me. These women, Patricia Vickers and Theresa Shoats, whose son and father, respectively, are founding prisoner members of HRC, mentored and guided me. I followed their lead and learned the ropes. With their help, I gained confidence when speaking with prison administration and government officials.

Through HRC, I traveled throughout the state of Pennsylvania and became connected to so many other family members who were fighting for their loved ones. After speaking at a rally at the Pennsylvania state Capitol in Harrisburg, I was introduced to members of the Global Women’s Strike. GWS is dedicated to women and the caring work they do, which includes fighting for prisoners. They have a saying, “Mothers, daughters, sisters, wives, fighting for our loved ones’ lives.” They were my support as a mother and a woman and helped catapult my public speaking and support network to national and international levels. I owe a tremendous amount to them.

Because I must convince naysayers, who do not want to hear about prisoners, my job is to change the narrative. I must prove to society that prisoners’ lives matter, that prisoners are human beings with families and loved ones who care for them.

We must also change the way our society treats poverty. Being poor has been criminalized, while crime is often a choice because of poverty. The poor are blamed for their own demise.

Mass incarceration is a huge brick wall. Change takes place brick by brick. Fighting for justice is a slow process that takes strength and patience. Every victory, no matter how small, is a victory and should be celebrated.

Throughout the years my son was incarcerated, I learned some sad truths about mass incarceration. I started out naive. The entire justice system is broken from the police to the district attorneys and judges to the prison guards and administration. I’ve been witness to a cornucopia of corruption and abuse of power at all levels. Reform is not a word I would use in this situation. Restorative and transformative justice seem far off but deserve consideration. For an alternative form of justice to work, the money must be taken out of mass incarceration.

The economy and the fact that America was built on capitalizing bodies since the first slave ship landed makes it hard to give up a financial system that is ingrained in its core. Not only does mass incarceration profit off labor, but they profit off the privatization and monopoly of such markets as phone calls, commissary, clothing and just about every product a prisoner needs to survive. Family members like myself, who are mostly poor, pay for these overpriced products. The prisoners can’t afford the products, which are normally two to three times higher than on the outside. Prisoners’ pay is well below the minimum wage at anywhere from 11 cents to 25 cents per hour up to in some instances $1 in federal prison.

I know many people ask what can we do to change this system. What can we do to combat racism? HRC Fed-Up! operates under the Universal Declaration of Human Rights, which bases its foundation on equal justice for all regardless of race, class, gender, religion, sexual identity. We believe that we all deserve justice and to be free of oppression in any form.

It would all be so easy if America followed this declaration. Instead, we see our leaders pointing the finger at other nations, while our country consistently and openly violates the human rights of its citizens.

I have fought this fight for nearly 20 years. I’m exhausted mentally and physically, but I will not give up. Though my son has come home, the fight is far from over. My son and I will join forces with other returning citizens to do the work. Where I alone was telling their story, they will now be able to tell their own story. This should make an impact. We owe it to everyone on the inside to continue this fight, tearing out more bricks from the wall of mass incarceration.