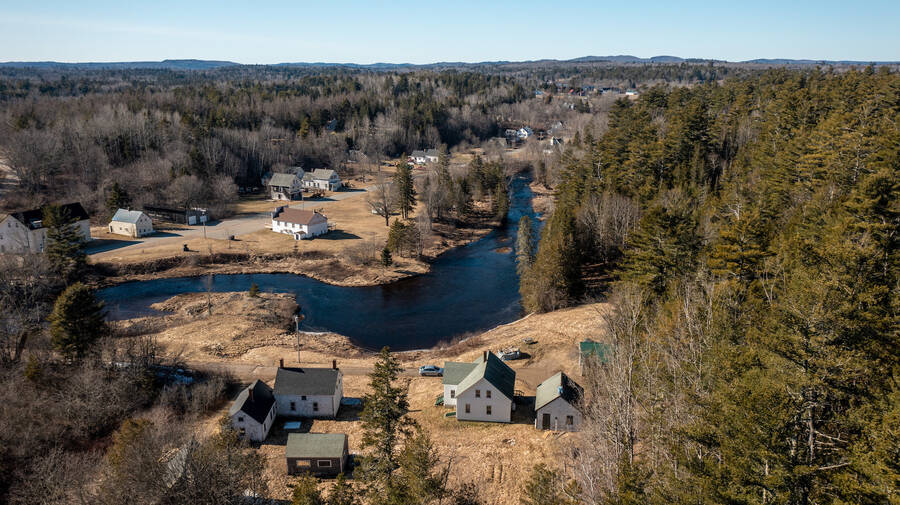 How A Small Town In Maine Stopped A Silver Mine

Above Photo: The Pennamaquan River flows past Pembroke, Maine, not far from where Canadian company Wolfden Resources proposed to mine for silver. The town banned industrial mining this spring. Ryan Malagara.

A Canadian Company Planned To Mine Silver Nearby.

Pembroke, Maine — One May evening, residents packed into a Pembroke meeting room to decide the future of their town. On the agenda: Should Pembroke ban industrial metal mining?

The coalition of farmers, environmentalists and retirees who had called the vote wasn’t sure what to expect. Pembroke, a town of fewer than 900, isn’t exactly a liberal stronghold — Donald Trump carried the county twice. But this was not a national election, and the mining threat was not abstract: In 2021, Canadian company Wolfden Resources unveiled plans to mine for silver uphill from the wells residents rely on for water and just 2 miles from the rich estuary of Cobscook Bay.

Severine von Tscharner Fleming, one of the leaders of the grassroots effort to stop the mine, puts it this way: In Pembroke, “people are not all in the same part of the political spectrum, but our common ground is literally our common ground.”

Fleming moved to Pembroke in 2017, drawn to the heavily forested area, the fishing economy and the affordable farmland. She now runs an organic farm overlooking Cobscook Bay as well as Greenhorns, an organization dedicated to transitioning farms to more diverse, resilient and environmentally friendly agricultural systems.

When Fleming learned Wolfden planned to mine for silver in Pembroke, she saw it as an existential threat to the community. She helped start the Pembroke Clean Water Committee to appeal to her neighbors based on something they could all relate to: the need for clean water. The committee organized information sessions with health, legal and geology experts, including one with longtime Anishinaabe activist Winona LaDuke.

Attendees learned the dangers inherent in this type of silver mining: When it exposes sulfide deposits or tailings to oxygen and water, it forms sulfuric acid, which can leach heavy metals like lead, arsenic and mercury from the surrounding rock. It can lead to what the PCWC website describes as “a self-perpetuating and often runaway process”: acid mine drainage.

“Once it starts,” Fleming says, “it has its own self-fulfilling prophecy of doom.”

In the worst cases, that drainage leaves aquatic life and vital plants to struggle in an environment closer to battery acid than water.

Scientist and former Maine State Legislator Ralph Chapman, who spoke at one of the information sessions**,** tells In These Times the mine would risk permanently polluting Pembroke’s groundwater and the bay.

The Passamaquoddy Tribe, whose government offices are about 6 miles east of Pembroke, approached the issue as people whose ancestors “have inhabited this region for over 12,000 years,” says tribe historian Dwayne Tomah, who also spoke at one of the sessions. The tribe relies heavily on the bay for scalloping and fishing. The tribe wouldn’t, Tomah says, allow Wolfden “to come into the territory to affect our nearby neighbors.”

“When you start affecting the water,” he says, “it starts to affect all of us.”

Wolfden did not respond to a request for comment, but its website claims the company minimizes “any negative impact to the environment and local population.”

Chapman says the mining that took place in Maine until the 1970s left state taxpayers on the hook for tens of millions of dollars just to “try to reduce the degree of acid mine drainage.” And the remediation “has to be done in perpetuity,” Chapman adds.

To stop Wolfden’s mine, the groups turned to Maine’s state constitution, which gives broad “home rule” powers to cities and towns. They worked with a law firm to write their proposal and went door-to-door to talk with their neighbors. Eventually, they gathered the 100 signatures needed for a public vote.

Volunteers, including Catherin Adelman, vice president of Friends of Cobscook Bay, listened closely to residents who worried the ordinance would also ban local gravel pits. “We had to say, ‘No, this is metal sulfide mining. This is not about gravel pits,’ ” Adelman says. Those one-on-one conversations were the “real work that got us to the vote.”

While Pembroke won’t soon serve as the site of a large-scale metal mine, Fleming is turning attention to neighboring towns to preempt a possible second attempt by Wolfden.

“There’s not that many of us” in these small towns, Fleming says. “So it’s very clear that if you don’t act, then the action might not happen.”