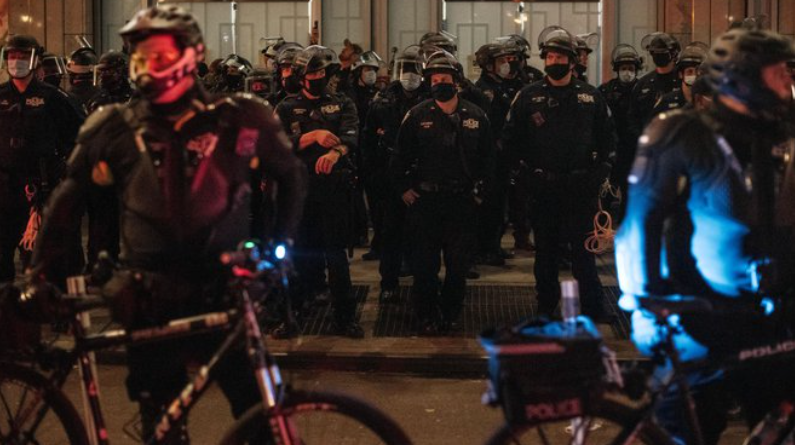 How An NYPD Anti-Terror Squad Became A Tool For Repression

On a Thursday night in November, two days after the presidential election, hundreds of New Yorkers gathered outside the Stonewall Inn for a march against police brutality. The event was one in a series of Black Trans Liberation marches, a recurring protest and pride parade held each week since the police killing of George Floyd in Minneapolis. Unlike the previous iterations, which had proceeded without incident, this one was accompanied by scores of heavily armored officers with the NYPD’s Strategic Response Group.

The conflict began almost immediately. As the march moved downtown, members of the SRG — equipped with bicycles and clad in combat-style chest plates and shoulder pads — quickly cleared the street, shoving nearby demonstrators, including NYC Public Advocate Jumaane Williams. Police arrested 18 protesters, including the organizer, Joel Rivera, who was tackled to the ground and charged with carrying a bullhorn.

Later in the evening, as the protest began to taper off in Union Square, a phalanx of SRG officers rushed into the crowd, deploying a controversial tactic known as kettling to pin the group inside the park. According to a sergeant at the scene, the crackdown was prompted by protesters throwing water bottles.

I thought we were done! Not at all! pic.twitter.com/vDuXflWFRk

On the Brian Lehrer Show the following morning, Mayor Bill de Blasio denied allegations of police overreach, insisting that officers were responding to specific threats, not antagonizing peaceful protesters. “Mr. Mayor you seem to be missing the obvious point,” a caller who attended the march informed him. “There are hundreds and hundreds and hundreds of police officers in full military gear, chanting ‘move’ as if they’re in the army, for a fraction of the protesters.”

A few weeks later, the Department of Investigation would release their own assessment of the NYPD treatment of protesters following Floyd’s murder, faulting the department for an “intimidating, confrontational” response that provoked, rather than reduced, tensions at the demonstrations.

The report attributed many of those issues to the central role of the SRG, a roughly 700-person unit that came to oversee a command of 2,000 officers during the Floyd protests. It urged the department to create an entirely new Protest Response Unit, and to rethink the mission of the SRG — recommendations that the Mayor’s Office has vowed to follow.

But as the city faces growing external pressures to reform the NYPD, substantial questions remain about whether it can actually remake its protest policing force. According to law enforcement experts from across the political spectrum, understanding the rise of the SRG, and the ways in which it was allowed to evade accountability under the current administration, will be crucial to safeguarding the rights of New Yorkers in the future.

In January of 2015, Police Commissioner Bill Bratton was outlining his new vision for the NYPD at a Midtown luncheon. Pointing to the recent terrorist attacks in Paris and Mumbai, Bratton said he had identified a need for an “elite” tactical force trained in “advanced disorder control.” This new Strategic Response Group was to consist of 350 officers, with outposts in every borough, tasked with fighting domestic terrorism and overseeing large-scale events, including protests.

After advocates bristled at the idea of employing counter-terrorism tactics on Constitutionally-protected political demonstrations, Chief of Department James O’Neill — who’d soon replace Bratton as the city’s top cop — attempted to walk back his boss’s statement.

“They will not be involved in handling protests and demonstrations,” O’Neill told reporters. “They’ll have no role in protests. Their response is single-fold. They’ll be doing counterterror work.”

When the department did begin deploying SRG officers to protests later that year, the city’s legislators didn’t seem to notice. Melissa Mark Viverito, who served as Council Speaker, told Gothamist she couldn’t recall any discussion of the unit or its role in demonstrations. “It’s impossible for us to know the minutiae of every single decision they’re making,” Viverito said. “The NYPD has always been a rogue entity.”

At the time, she was focused on the push to hire 1,000 new officers as part of a new community policing effort. Despite some initial opposition, de Blasio agreed to the request in May of 2015, unexpectedly throwing in an additional 300 officers, whom he said would be focused on counterterrorism. While the department does not release any personnel decisions, policing experts believe those officers were absorbed by the SRG.

By the end of its first year, the number of SRG officers had ballooned to twice its promised size. The unit’s personnel budget, initially recorded at $13 million, soared to more than $90 million per year by 2016 — an expense that has remained basically steady in the years since, according to the Independent Budget Office. The pledge from department brass to separate its terrorism and protest policing was abandoned without acknowledgement.

“The arrival of the SRG completely changed the landscape,” said Chris Dunn, the Legal Director of the New York Civil Liberties Union. New Yorkers who encountered the SRG at protests noticed a change in tactics immediately, dubbing the unit the “Goon Squad.”

The group’s predecessor, a smaller borough-based unit called the Disorder Control Unit, which was later folded into the SRG, had played a major role in high-profile events like Occupy Wall Street. While the DCU had left smaller demonstrations to the local borough patrols, the new group was showing up more frequently, deploying an aggressive military-style response that “pretty much invariably escalated tensions,” Dunn said.

Those tactics exploded into the public view this past June, when armored SRG officers came to define the public image of the NYPD’s violent response to Black Lives Matter protesters marching against police brutality. On top of its 700 officers, the SRG, and its commanding officer, John D’Adamo, also supervised an additional 1,300 officers deployed during the protests as part of the NYPD’s Mobile Field Forces. The department’s Community Affairs Bureau, according to the DOI report, was not part of the planning or strategy for policing the Floyd protests.

Experts in crowd psychology have long embraced a philosophy known as the “Madison Method,” in which officers policing protests are instructed to facilitate, rather than confront, First Amendment activity. The Task Force on 21st Century Policing, convened by President Obama in the wake of Michael Brown’s killing in Ferguson, Missouri, was largely based on that paradigm. It recommends law enforcement agencies avoid military style formations and riot gear when policing protests, and communicate openly with participants in a demonstration.

Such a “guardian mindset” runs counter to the NYPD’s historical approach to policing political speech — particularly when police are the subject of those protests. In previous years, the Disorder Control Unit was found to have endorsed tactics such as infiltrating demonstrations in order to spread misinformation, and making “proactive arrests” to set a “tone.” During Occupy Wall Street, a memo from the unit reminded officers of the “psychological advantage” of maintaining a “strong military appearance” at protests.

While de Blasio has frequently touted the NYPD’s evolution under his administration, critics of the department see the SRG as a continuation of that old school approach. Officers assigned to the bike squad are divided into platoons, with positions such as “linebacker” and “point officer” that make use of elaborate line formations to contain protests. In the early days of the Floyd protests, members of the unit began wearing full-body tactical gear, purchased from the motocross company Fox Head Inc. In addition to larger protests, the so-called “hard gear” has since appeared at demonstrations with just a few dozen people and post-election celebrations.

It’s a roving, joyous dance party trailed, for some reason, by dozens of SRG bike cops in full body armor. I asked one what they thought was gonna happen and he responded: “Have you been outside the last few days?”

Another suggested I call the Mayor’s Office pic.twitter.com/Ue9fCnMRKx

“For 100 years the NYPD managed to deal with protests with nothing more than helmets and in a few rare occasions riot shields,” said Alex Vitale, a sociology professor at Brooklyn College and the author of The End of Policing. “Now they have heavily armored officers, water cannons, more frequent use of pepper spray, long range acoustic devices. It’s an escalation of repression tactics.”

Gothamist’s Freedom of Information requests seeking crowd control training materials were denied by the NYPD. But materials viewed by the Law Department showed that the department’s disorder curriculum is still focused on the discredited “mob mentality” theory. It describes participants in a protest as adrenalized, unpredictable actors who may be experiencing “emotional arousal created through contagion,” according to an excerpt published by the Law Department in December.

Anthony Raganella, who spent eight years as the commanding officer of the NYPD’s Disorder Control Unit prior to the creation of the SRG, said that officers policing protests face a unique set of challenges, and must be prepared for the possibility of unpredictable violence. He noted that dozens of NYPD officers sustained injuries during the Floyd protests, which at times devolved into unrest and looting.

“There has to be a balance between the First Amendment and the mandate of police to maintain public order, and that’s a very delicate balance,” Raganella told Gothamist.

Still, he acknowledged that the NYPD’s approach to crowd control was largely “antiquated.” Before retiring from the force in 2018, Raganella, who describes himself as a “visionary” of the SRG, presented the department with a 13-week training academy for the unit’s officers, with best practices on crowd control that he’d pulled from European police departments. That got whittled down to a two-week program, half of which is spent on using heavy weapons, according to Raganella. “My idea of professionalization and specialization went right out the window,” he said.

As part of his promise to reform the department, de Blasio has pledged to implement a series of policy changes, outlined by the Department of Investigation, focused on the policing of protests. The document’s first two items call on the NYPD to create a new Protest Response Unit that does not report to the SRG and to update its Patrol Guide with a policy on protests, developed with help from civil rights attorneys and community members.

The NYPD did not respond to a list of questions about the current status of those recommendations. In an email to Gothamist, a police spokesperson said that the department handles up to 10 protests on a daily basis, most of which do not involve the SRG. “The NYPD now positions Community Affairs Officers in front of protestors but also utilizes resources as warranted in a flexible manner,” according to a spokesperson, Sergeant Jessica McRorie.

This is from Monday night, MLK day. @NYCMayor have you seen the video yet?!

We were standing on the sidewalk chanting “Black Lives Matter” when out of nowhere, provoked by nothing, the cops charge right at us and try to grab us for arrest. pic.twitter.com/oWCu1x6COd

“Our first goal is protecting the safety and first amendment rights of protesters,” mayoral spokesperson Avery Cohen added in a separate statement. “Consistent with the recommendations of DOI, we’ve made a tactical shift in our protest response, designating Community Affairs staff as the primary liaisons on the ground. We look forward to implementing DOI’s broader set of recommendations.”

Even after the recommendations took effect, the SRG has continued to respond forcefully to Black Lives Matter protests, most notably during a Martin Luther King Day demonstration last month. Reform advocates say that the agency’s deeply ingrained attitude toward protesters means that many of the problems SRG will likely persist, regardless of which part of the agency is technically in charge.

“The mayor gave free rein to the NYPD to dramatically expand their political policing with no public oversight or accountability,” he added. “People have no choice but to take to the streets.”