Anand Gopal built his career as a writer with on the ground reporting from Afghanistan where he embedded with the Taliban. He gave some insight into their motivations.

Anand Gopal is now a shill for the U.S. “regime change” crimes in Syria. He is also attempting to justify the existence and crimes of ISIS by attributing those to a “legit” motivation. That is a convenient excuse for those who join ISIS. 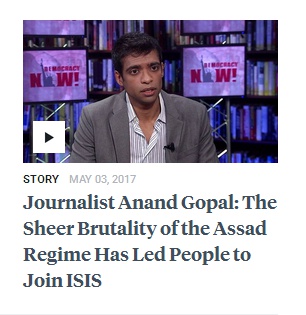 There is however reason to believe that people joined ISIS in Syria is because the “western” media hyped ISIS by promulgating its propaganda, found excuses for its crimes and because Anand Gopal directed them [*see update below] to advice on how to travel to Syria to join ISIS:

In his recent interview with Democracy Now Gopal makes several assertions that are completely contradicted by the public and historic record and are thus evidently lies:

Hillary Clinton’s State Department emails explicitly named the aim of the policy: to “overthrow the regime”, and the main purpose: to “help Israel deal with Iran”:

UNCLASSIFIED U.S. Department of State Case No. F-2014-20439 Doc No. C05794498 Date: 11/30/2015 RELEASE IN FULL The best way to help Israel deal with Iran’s growing nuclear capability is to help the people of Syria overthrow the regime of Bashar Assad.
…
a successful intervention in Syria would require substantial diplomatic and military leadership from the United States. Washington should start by expressing its willingness to work with regional allies like Turkey, Saudi Arabia, and Qatar to organize, train and arm Syrian rebel forces. The announcement of such a decision would, by itself, likely cause substantial defections from the Syrian military. Then, using territory in Turkey and possibly Jordan, U.S. diplomats and Pentagon officials can start strengthening the opposition. It will take time. But the rebellion is going to go on for a long time, with or without U.S. involvement.

Syrian “revolutionaries” have documented how then U.S. Ambassador Ford promised them “regime change” when he instigated the insurgency.

Gopal is daft, or a lying piece of shit, when he claims that the U.S. did not and does not pursue “regime change” in Syria. Does Anand Gopal really believe that the bombing of Syrian Army positions and infrastructure is just ‘After-Dinner Entertainment’ at Mar-a-Lago, not an active “regime change” policy?

Further into the interview Gopal openly lies about ISIS, its origin and its fighting with the Syrian government:

[ANAND GOPAL:] The regime does not fight terrorism. It’s actually the single biggest cause of terrorism in Syria. It is the cause of ISIS in Syria. And from—if you talk to Syrians, Bashar al-Assad and the regime is the biggest terrorist in the country. The force that’s actually fighting ISIS, which I assume is what he’s referring to, is the YPG, which is backed by the United States.NERMEEN SHAIKH: Can you explain what you mean by that, that the cause of ISIS or what gave birth to ISIS in Syria is in fact the Assad regime? Because that’s not what’s commonly understood.
…
NERMEEN SHAIKH: And is it your sense that ISIS’s power or control over Syria is weakening?

ISIS in Syria was not “caused” by the Syrian government. The US fueled the rise of Isis in Syria and Iraq.

It is the U.S. that created ISIS with its invasion in Iraq:

The Islamic State – also known as ISIS, ISIL, or Daesh – emerged from the remnants of al Qaeda in Iraq (AQI), a local offshoot of al Qaeda founded by Abu Musab al Zarqawi in 2004. It faded into obscurity for several years after the surge of U.S. troops to Iraq in 2007. But it began to reemerge in 2011. Over the next few years, it took advantage of growing instability in Iraq and Syria to carry out attacks and bolster its ranks.

To create a “Salafist principality”, an Islamic State, in eastern Syria was, according to the U.S. Defense Intelligence Agency:

EXACTLY WHAT THE SUPPORTING POWERS TO THE OPPOSITION WANT, IN ORDER TO ISOLATE THE SYRIAN REGIME

It is the U.S. that enabled ISIS to grow in Iraq and to then go to and grow in Syria. Obama himself explained that he let ISIS grow in Iraq to “regime change” the Maliki government in Iraq:

The reason, the president added, “that we did not just start taking a bunch of airstrikes all across Iraq as soon as ISIL came in was because that would have taken the pressure off of [Prime Minister Nuri Kamal] al-Maliki.

Secretary of State Kerry himself explained that the Obama administration let ISIS grow in Syria to “regime change” the Assad government in Syria:

“And we know that this was growing. We were watching. We saw that Daesh was growing in strength, and we thought Assad was threatened. We thought, however, we could probably manage, that Assad would then negotiate.

The U.S. supported Free Syrian Army allied with ISIS (and al-Qaeda) and publicly lauded it (vid). The CIA, which finances the FSA, surely knew this.

The mass of ISIS fighters in Syria were not Syrian people who joined because of the “sheer brutality of the Assad regime” but foreigners lured to join ISIS by people like Anand Gopal:

Run by Iraqi jihadist Abu Bakr al-Baghdadi, the Islamic State of Iraq and the Levant (Isis) has up to 6,000 fighters in Iraq and 3,000-5,000 in Syria, including some 3,000 foreigners. The Economist reported that Isis is formed by a thousand jihadist from Chechnya and “perhaps 500 or more from France, Britain and elsewhere in Europe”.

Between 1 April 2016 and 31 March 2017, 43 percent of all Islamic State fighting in Syria was directed against President Assad’s forces, 17 against the US-backed Syrian Democratic Forces (SDF) and the remaining 40 percent involved fighting rival Sunni opposition groups — in particular, those who formed part of the Turkey-backed Euphrates Shield coalition.
…
“We have seen Islamic State territorial losses accelerate significantly in 2017,” Strack said. “Their losses were largely driven by a greater commitment from the US to back the Syrian Democratic Forces, but also by major Syrian government advances east of Aleppo and around Palmyra.”

Not one of Anad Gopal’s main claims in the Democracy Now interview is supported by the historic record. All are contradicted by original sources and serious analysis.

“Regime change” in Syria has been and is the declared policy of the U.S. government since 2006 and it continues to be the aim, even when it is, at times, not always openly promoted as such.

Gopal claims it was the Syrian government that caused people to join the Islamic State. Gopal’s own (criminal) promotion of how to join ISIS contradicts his assertion.

Update [10:20am]: Anand Gopal has now deleted his March 21 2015 tweet. I made the screenshots above early this morning but the link to the tweet in question is now dead and a search no longer finds it.