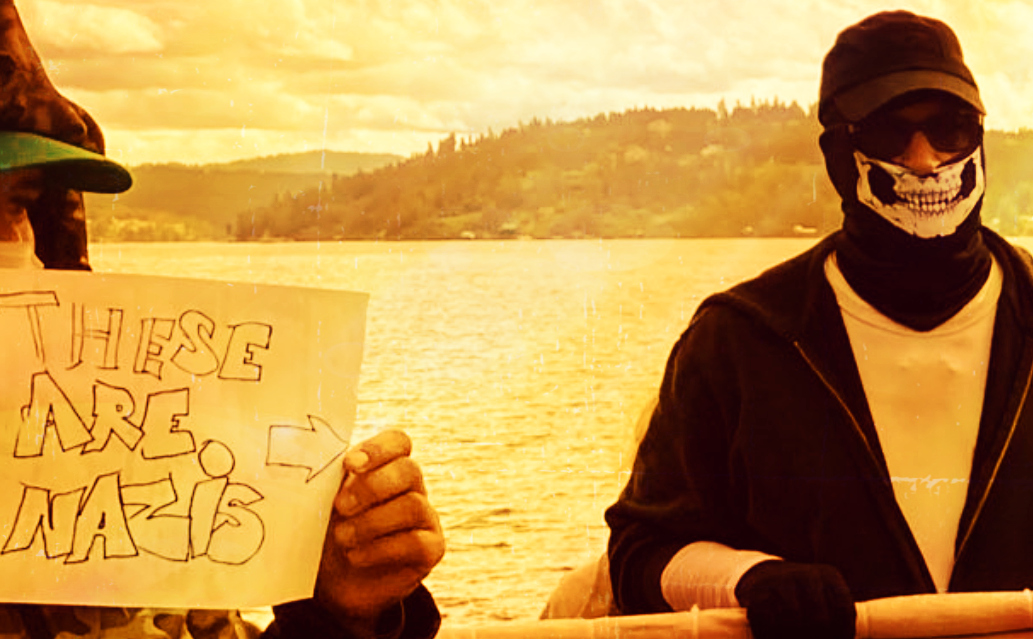 Report from antifascists in Coeur d’Alene, Idaho on mobilizing in defense of a Pride celebration that was targeted for violence and disruption by the far-Right.

In the months leading up to June 11th, antifascists in and surrounding Coeur d’Alene recognized the threat that queer folks were facing from both local and faraway fascists. Different collectives outside Coeur d’Alene got together to assess the risks of traveling to north Idaho to support and defend Pride and to establish goals for the day. Antifascist crews worked hard brainstorming and predicting potential outcomes, taking care to prioritize the safety of Pride attendees and vulnerable folks living in north Idaho. Eventually, crews decided the best and safest goals would be to:

These goals were carried out successfully on Saturday. Towards the beginning of the event, antifascists were able to eject a couple of siege-skull-wearing neo-Nazis from the city park. More counter-protesters filled the park throughout the day. Many were militia-type christofascists, angry that a Pride event was occurring in what they see as ‘their’ city. They were joined by several more self-avowed neo-Nazis, determined to eradicate the existence of queer folks from their white utopia. Antifascists first took notice of a group of neo-Nazis attempting to walk through the crowd in the park handing out fascist propaganda, and, in concert with other Pride attendees, worked to make a barrier.  This split up the neo-Nazis and made it possible both to keep tabs on the individuals in the park and to take note of the more innocuous fascists in the park who received their propaganda approvingly.

Antifascists were also joined by some Pride attendees as some members of the neo-Nazi group held their banner up on the waterfront of the centennial trail, behind the band-shell where the drag queens were performing. Folks created a line between the Pride festivities and the fascists holding their banner and told the nazis, more or less, to eat shit. This ended up drawing even more fascists out of the Pride event in the park up to the waterfront to engage verbally with antifascists. This kept the focus on antifascists, rather than the folks trying to celebrate Pride in the park behind them.

After rolling up their banner, the neo-Nazis made their way into the park to display it again. Though the north Idaho Pride alliance’s security team at first (unsuccessfully) directed people to ignore the neo-Nazis, they ended up adopting some antifascist tactics alongside antifascists, i.e. using umbrellas to block the fascists and their banner and forming a line to prevent them from being seen by Pride attendees.

Antifascists were also able to document the arrests of 31 patriot front members, explain to the unknowing locals who patriot front is, and heckle the absolute shit out of them.

Antifascists left Pride with several pieces of advice and takeaways.

This event was one of a growing list of examples of recent fascist incursions into Pride. While the fascist organizing and action occurring in Coeur d’Alene is unique, we believe Saturday reflected the fascist threat level broadly in so-called America, and especially set the tempo for bigoted violence in smaller, more rural, and right wing cities. Antifascists call on one another as well as community members everywhere to support and protect one another regardless of borders and to oppose and disrupt fascist activity in these communities.