How Artists Are Exploring Radical Economies

Above photo: Still from ReUnion film | Image courtesy of ReUnion

There are many proposals for radical economies from progressive economists, activists and think tanks. Artists are increasingly joining these debates with speculative proposals and unconventional methodologies. I will explore three art projects here that approach the economies of caring labor, agricultural and social production on farms, and forests, with an artistic spin. Driven by artistic curiosity but not shying away from addressing systemic issues, these projects help us open the scope of our discussions by engaging with diverse social actors.

The ReUnion network is a design prototype for a socio-economic ecosystem that helps people organize bottom-up social support through long-term P2P (peer to peer) care agreements. Driven by the question of how society would be organized if decentralized, ReUnion approaches interpersonal relationships as the base unit of a commons-based socio-economic system.

Care is a problem of our societies in its increasing scarcity and reliance on marketized solutions. At the same time, it is a form of labor that demands a qualitative effort within trusted, often long-term relationships. Identifying intertwined trends in socioeconomic and cultural contexts, such as surging nomadic workforces, the gig economy and mass burnout, as well as the aging society and the decline of the nuclear family, ReUnion tries to reimagine how people can organize their personal lives and form social units born of new kinships.

ReUnion offers a collaborative contract-making web platform for interpersonal care commitments. This encourages people to establish a limited number of intimate relationships where mutual support is involved. Ultimately, Reunion aims to engage both parties in a long-term caring contract through a distributed ledger technology-powered communal fund and welfare system, which ensures data anonymity and security with no centralized authority controlling user data. This welfare system invests in solidarity and supports a cooperative economy. In this way, Reunion gives both organizational and economic support to people to freely form self-initiated and collaboratively-determined social support systems for the stewardship of care as a shared, precious and common resource that must be made sustainable.

Underlying the design is an urge to revalue values. Care work has been traditionally relegated to unwaged labor, and yet marketizing it only renders it into commodified labor in the capitalist arrangement, often undervalued and precarious. Labor under the commons is opposed to the logic of efficiency and optimization, and is inherently without measure. This is why ReUnion responds by designing an alternative predicated on a different, more subjective value system.

INLAND is an arts collective initiated by Fernando García-Dory, dedicated to agricultural, social and cultural production. It has promoted site-specific art projects in rural areas since its early days. Now it works as a para-institution – beside and beyond traditional institutions – on land-based collaborations and economies. It advises the EU on the use of art for rural development policies while facilitating shepherd and nomadic peoples’ movements, and is recovering an abandoned village for collective artistic and agricultural production, under the idea of developing ‘communities-of-practice’. In recent years, they have been developing a curriculum to create a multidisciplinary knowledge program around the relationship between art, farmers’ knowledge and agroecology, highlighting the imbricated nature of commons as tangible resources and knowledge.

Together with Hito Steyerl, an artist who critiques contemporary media and technology, INLAND is developing a cryptocurrency, the ‘Cheesecoin’, as a community currency to enable translocal exchange. The design bears a sentence: ‘This currency value is upheld by the integrity of its community’. For the currency relies on the density, health and realness of the social tissue using it. The number of Cheesecoin issued per year follows the cheese standard, equivalent to the amount of kilograms of cheese INLAND produces in the mountains. Users can keep their balance through an app that allows them to create new exchanges and forms of value equivalence, for example, 1 Cheesecoin = 1 kg cheese = 1 sheep adoption = 1 day of work at INLAND (5 hours) = 1 night at INLAND. Through this multi-issuer model, participants are informed of INLAND activities progressively and become more engaged.

Fernando García-Dory says of the INLAND project: ‘INLAND could be seen as a scale-model of a state, or beyond that term, of a social structure, productive also in economic and cultural terms.’ Indeed, an installation he showed recently at Centre Pompidou works as a mini world and a roleplay game, inspired by the ancient Korean geomancy and fantasy gamers, through which the different actors in a community can come together and explore the implications of their collective actions. The play aspect is important: you can performatively suspend your belief in the capitalist system and enact other values forms. 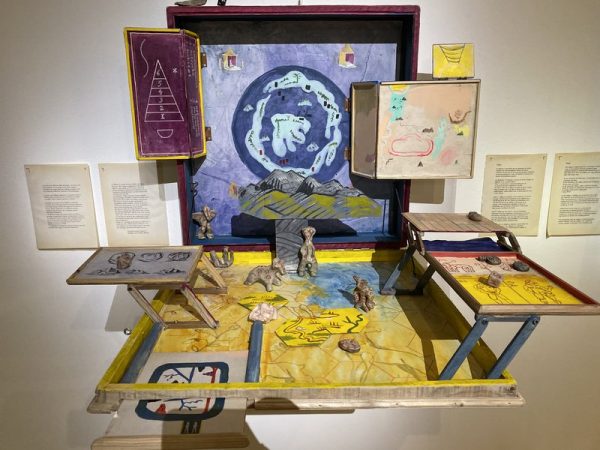 terra0, a project by Paul Seidler, Paul Kolling and Max Hampshire, is a self-owned forest. Built as an DAO (Decentralised Autonomous Organization) – an organization whose rules are encoded as a computer program that self-executes when certain conditions are met without the mediation of a central authority – terra0 is able to sell licenses to log trees through automated processes, smart contracts and Blockchain technology. The forest thus accumulates capital and can eventually buy and own itself. Additionally, the augmented forest is in the position to buy more ground and therefore to expand.

The artists envision the self-management of the forest in the material world would be realized through remote sensing technology and machine learning, both already adopted in forest management industries. To be sure, the artistic ingenuity here is not in proposing a technical solution to forest preservation, but in fundamentally provoking our relation to nature. In their own words, the artists wish to explore ways for non-humans to ‘act in, and with, the world via technology as agents of the same (if not higher) importance than humans’. This artistic curiosity becomes especially pertinent if we consider it in light of the recent debates on how to recognize and grant legal rights to natural entities in ecosystems. What if, in the face of future challenges, policy makers and private stakeholders could actively engage with such open, speculative questions from artists?

All of this amounts to a fundamental revaluing or resocializing of values. From anthropological studies on the gift economy of traditional societies, the emergence of value can be traced to inalienable circulation, slowly giving way to alienable exchanges among individualized agents. Instead of the monoculture of pricing theory, why do we not use social impact, environmental impact, or as philosopher Brian Massumi suggests, affects, wonder and zest, as indices of value? All of these are post-capitalist values. And they exist in abundance and excess in society. Importantly, we don’t need to funnel them into normative metrics, but should encourage the practice of them in common. These art projects not only challenge the value regime we have inherited, but also give birth to an abundance of organizational forms: peer production and co-creation of services for our collective good.

The future requires a paradigmatic shift to a cultural intelligence of society and an art of life, predicated on the relationality of the human, the community and the ecological world at large. The agency of art is to be situated in the connected networks of wider social agents, where art can play a catalyst role. Back in the 60s and 70s, the Artist Placement Group (APG) sent artists into companies and governmental agencies for extended periods of time to raise critical questions and cross-pollinate unlikely projects. They were seeking what they called the ‘missing third client’ – a larger purpose that went beyond the artist or hosting organization. In the face of the future unknowns, we need to collectively define ‘the missing third client’. And that can be ecological, equitable futures, and meaningful lives for all of us.