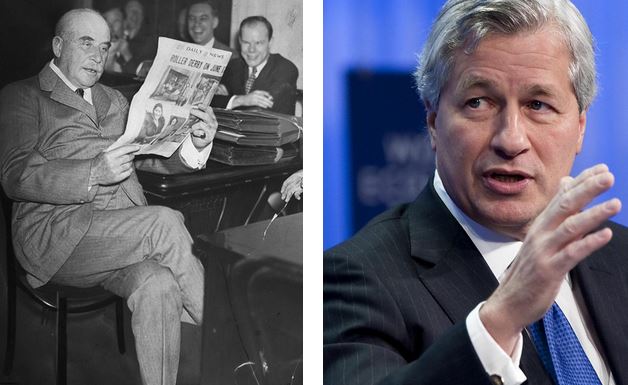 How Bankers Have Controlled US Politics

New York is a wonderful town — if you run a mega bank. Because for over a century, the Big Six banks and their leaders have dominated not just the U.S. banking industry, but American and global finance, traversing the power corridor between the White House and Wall Street to help themselves, their families and their friends in good times and bad, in partnership with the President.

But in the process of placing personal enrichment over the public interest and fair practices, particularly in recent years, they have created an atmosphere where the next big crisis is not a question of if, but of when. History has shown that absent true reform, those holding the power and the money can and will wreak havoc on the rest of the population.

For the first 80 years of the 20th century, four families largely controlled the nation’s top three banks: Morgan, Aldrich, Stillman and Rockefeller. National, financial and foreign policy was fashioned through personal connections to the Presidents — forged through blood, marriage, mentorships and connections made at Ivy League colleges, and through social activities like yachting, golfing, ranch barbeques and exclusive parties and clubs.

In October 1907, Manhattan was struck by a major bank panic. People from Fifth Ave. to Harlem rushed to extract their money from the Knickerbocker Trust Company because one of its leaders had made a horrendous bet on copper, which precipitated a wider panic. A fear of greater ramifications caused the “Trust-Buster,” President Teddy Roosevelt, to turn to the one man he believed could help — a banker, J.P. Morgan.

At midnight, Morgan and his entourage gathered at the Hotel Manhattan. With $25 million from the government to utilize as he saw fit, Morgan directed his financial friends to back the Trust Company of America, the “Too Big to Fail” firm of the time, embraced by the government and finance men who decided which banks lived and died — not the Knickerbocker Trust Company. President Roosevelt sat in Washington awaiting the results.

At 1 a.m., Frank Vanderlip, vice president of National City Bank (now Citigroup), informed reporters in the lobby that all would be well. And it was. New York papers sung Morgan’s praises. He had “saved” the city, the country. He was dubbed a “king.” The press omitted that he did it without dropping a dime of his own money.

Fast-forward through WWI and years of speculative buying and shady scams, and the stock market stood poised for collapse. In October 1929, it did.

Another meeting was called. The Big Six bankers gathered at the House of Morgan on 23 Wall Street before Thomas Lamont, acting Morgan Chairman. At his table were five other bankers: from National City Bank and First National Bank (both now part of Citigroup), from Morgan Guaranty and Chase (which, along with the Morgan Bank, became part of JPM Chase), and from Bankers Trust (which was controlled by the Morgan Bank). President Hoover sat in Washington awaiting the results.

The men hashed out a plan to boost the markets using their firms’ (or customers’) money. Each banker agreed to pony up $25 million. The stock-buying began. The mood and the markets were lifted. The media exalted. Nonetheless, over the next three years, the market lost most of its value, and a Great Depression ensued, crushing citizens.

Yet the Big Six survived, devouring thousands of smaller banks that failed.

Today’s Big Six banks are largely combinations (with additional members thrown in the mix) of the same Big Six banks that thrived through the Panic of 1907, Crash of 1929, WWII, the Bay of Pigs, the 1990s merger mania, and the recent financial crisis of 2008.

For the last 100 years, their leaders have collaborated with willing Presidents to run America. Given current global financial complexity, the Big Six chairmen have more economic control than Presidents, governments or central banks. We don’t elect them, but we do keep our money with them. We shoulder the cost of the risks they take.

With so much power in the hands of an elite few, America operates more as a plutocracy on behalf of the upper caste than a democracy or a republic. Voters are caught in the crossfire of two political parties vying to run Washington in a manner that benefits the banking caste, regardless of whether a Democrat or Republican is sitting in the Oval. Meanwhile, American inequality is reaching pre-1929 heights.

Mitigating the big banks’ power requires, at long last, breaking them up in such a manner as to split our deposits and taxpayers dollars from their speculative activities — by finally reinstituting the Glass-Steagall act of 1933.

In addition, we need to instill deposit and assets limits on these monstrosities to reduce the amount of control they have over America’s money. We need Congress to wake up to the looming mega-crisis around the corner that will happen without serious reform.

And, not least, we need a President who will get out of the bankers’ bed.

Prins, former managing director at Goldman Sachs, ran the international analytics group at Bear Stearns in London. She is author of the new book, “All the Presidents’ Bankers,” and a senior fellow at Demos, a think tank.