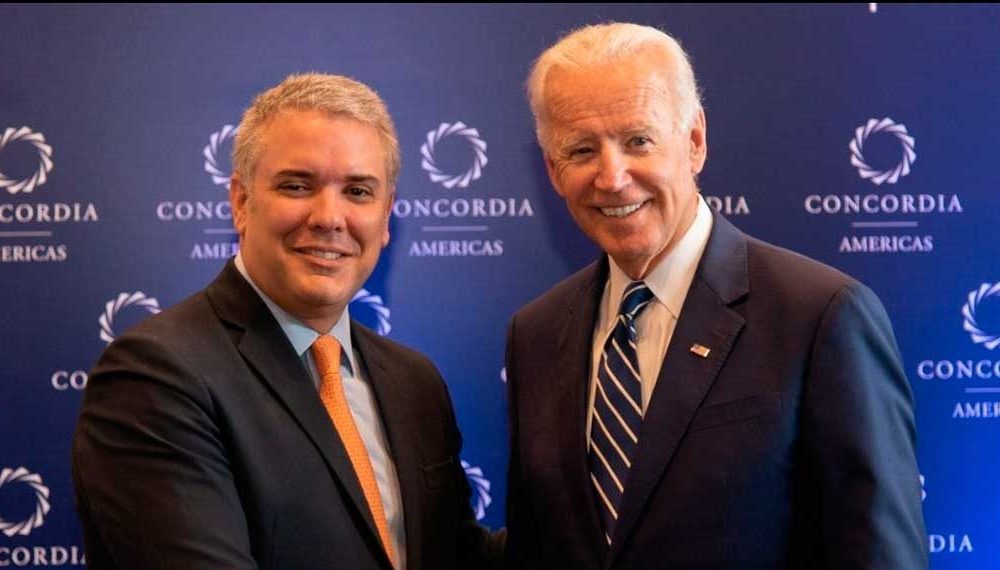 Biden played a key role in empowering the ESMAD police force that is now being used to crush dissent in Colombia.

This is all the more reason the U.S. Left must make solidarity with the Colombian working class a priority.

In the last week, Colombia has exploded in nationwide protests and work stoppages against the government of President Ivan Duque. With over 19 people killed by state forces in the last week, and with image after image of brutal police repression going viral across the world, the protests have sparked international outrage and concerns about human rights abuses. Joining this chorus of voices is a growing number of organizations and politicians urging Joe Biden’s government to take direct action to curb police violence in Colombia and stop its continued funding of the country’s brutal riot cops, commonly referred to as ESMAD. For its part, the U.S. Department of State issued a mealy-mouthed statement condemning the violence and upholding the people’s “unquestionable right to protest peacefully” while also supporting “the Colombian government’s efforts to address the current situation through political dialogue.”

What has received far less attention, however, is the central role the United States has played in creating the very conditions that have sparked this heroic struggle. While the Biden administration offers gestures of performative indignation over the battle scenes coming out of cities like Cali and Bogotá, it conveniently ignores the fact that Joe Biden himself spearheaded the very policies that trained and funded the Colombian armed forces that are currently murdering and repressing the Colombian people with impunity.

Strikes and protests began spreading throughout Colombia on April 28. These uprisings come in response to a tax reform pushed by the country’s far-right government. This tax reform proposed to tax public services, raise taxes and cut tax exemptions for many individuals, and impose a VAT (value added tax) on several public services that would hit Colombia’s working class and poor especially hard. But this reform was only the latest instance of Duque’s austerity measures which have given immense tax breaks to the rich while placing greater economic burdens on the poor. It comes on top of the government’s miserable response to the pandemic, which was successful only in protecting the profits of the rich while throwing millions of people into poverty and creating the deepest recession the country has experienced in the last 120 years. According to statistics published by DANE (National Administrative Department of Statistics) this Thursday, the monetary poverty index in Colombia for 2020 increased 6.8 percent and stood at 42.5 percent; in other words the DANE is reporting that 21.2 million Colombians do not have enough income to meet their basic needs.

It should come as no surprise then that protests are continuing despite the fact that Duque has been forced to repeal the tax reforms. Walking back this controversial policy was not enough to contain the rage spilling out into the streets, and as the protests continue, more and more people are joining in the mobilizations and standing up to the murderous repression of the police. This anger has built up for decades over widespread conditions of poverty and state-sanctioned violence precipitated by years of neoliberal attacks on the rights and lives of working and poor people across Colombia. Millions of people — young people, workers, and activists — are fed up with a regime that systematically massacres protesters, invites foreign investment and capital to exploit and displace thousands, and attacks the most vulnerable sectors of society, including Colombia’s large indigenous and Black populations. But this outrage is also directed at the long reach of U.S. imperialism in the country. The Duque regime, and the Manuel and Uribe regimes before it, would not be what it is today if not for Plan Colombia, a policy that Joe Biden himself championed while in the U.S. Senate Foreign Relations Committee in 2000. This plan is responsible for increased violence in the region and the displacement of over 7 million Colombians since its inception. It is directly responsible for the creation and training of the violent Escuadrón Móvil Antidisturbios (ESMAD) police force.

Biden’s support for Plan Colombia 21 years ago was part of the international front of the U.S.’s “War on Drugs,” which is responsible for both the militarization of much of Latin America and the racist mass incarceration and policing of millions of people of color in the United States. Plan Colombia provided $10 billion in military funding and the transfer of black hawk helicopters to Colombian security forces. This aid was used not only to fund military operations in Colombia’s Civil War, but also to provide huge bonuses to military officials. Under the guise of fighting the drug trade, Colombian security forces used this aid to murder thousands of civilians, claiming that they were “guerilla soldiers killed in combat.” In constructing the plan, Biden pushed for increased militarization time and time again, even going so far as to push back against efforts by some of his colleagues to redirect Colombian military funding to domestic drug treatment programs. Along with the billions of dollars of funding, the CIA also trained battalions of the Colombian army to protect oil pipelines belonging to U.S. companies.

Biden’s policy toward Colombia came in the middle of a war between the Revolutionary Armed Forces of Colombia (FARC) and the Colombian government. Though the two sides agreed to an uneasy peace in 2016, the internationally-recognized Colombian government will not be satisfied until it has suppressed all opposition, whether it comes from the FARC or protesters like those in the streets today. The civil war was responsible for displacing millions of refugees and the deaths of thousands of civilians, many of which were from indigenous communities. In crafting Plan Colombia, Biden made sure that he could influence the outcome of the conflict to better serve U.S. imperialist interests. As he said in a speech at the time, “When I said, do we take sides? The answer is, yes, we take sides.”

A report in March 2002 found that as a result of the conflict, an average of 20 violent deaths had taken place each day in Colombia; in other words, violence in the region only increased with the implementation of Plan Colombia. The report also focuses on the harm that U.S. backed forces caused to the indigenous communities. With U.S. funding and support, the Colombian military destroyed crops the Cofán indigenous people relied on for subsistence through intense aerial fumigation, constructed oil pipelines through U’wa land, and armed paramilitary groups which used the excuse of the civil war to repeatedly massacre indigenous people uninvolved in the conflict.

Despite extensive documentation of the violence that Colombian security forces have inflicted on civilians throughout the past two decades, Biden bragged about his support for the imperialist project as recently as January 2020.

While Biden has aggressively fought to fund the escalation of military force against the working and poor people of Colombia, he has been just as ardent a supporter of financial intervention in the region. In his decades in government, Biden has overseen the U.S.’s neoliberal offensive in Latin America, ensuring the creation of new markets for U.S. capital abroad and working with financial institutions to make the economies of these countries completely dependent on foreign “aid” and loans.

Plan Colombia opened the way for the U.S. government and U.S. companies to work in tandem with the Colombian government to implement a wave of privatization and other neoliberal policies, increasing poverty and unemployment to unprecedented levels in the country. In 2003, the IMF intervened to negotiate a $2.1 billion loan with the Colombian government, on the condition that it would implement a series of austerity measures, including “the restructuring of the pension program, cuts to the public sector workforce, and the privatization of a major bank.” So while the U.S.-backed politicians and military officials ensured their own profits and those of U.S. capitalists, workers and oppressed people across the country were forced to suffer the consequences. And if his rhetoric on the campaign trail is any indication, Joe Biden’s plans for Colombia have not changed. He remains a staunch crusader for U.S. imperialism in Latin America, promising to work with the Duque regime to quell dissent by killing activists, funding death squads, promoting foreign investment, and opening up Colombia for further privatization of and attacks on the country’s crumbling social infrastructure.

Colombian workers are fighting not just against their own national regime, but also the U.S. empire. The demands of the millions of working and poor people taking the streets in every major city and town across Colombia expose Biden for the imperialist he is, bringing to light the conditions that U.S. imperialism imposes on Latin America and the rest of the world. Despite Biden’s national security team’s efforts to paint the United States as a champion of human rights, we cannot expect the architects of Colombia’s social and economic crisis to intervene on behalf of Colombia’s working people.

The success of the struggle in Colombia rests on the power of the young people, workers, and activists now standing up to decades of attacks on their living standards and working conditions. Using the power that only they have to disrupt the capitalist economy, they must decide together how to carry the struggle forward against both the government and its puppet masters in the United States. To help them in this struggle, workers and activists in the United States must take an active role in fighting against the U.S. imperialist machine which ensures nothing but attacks on the working class across the world. This means calling for an end to all funding for ESMAD, an end to the policies of Plan Colombia, and linking the anti-imperialist struggle to the fight against police terror in the United States. The struggle of our Colombian brothers and sisters is not only against austerity, it is also against an oppressive regime armed and backed by U.S. imperialism. The socialist left in the U.S. has an obligation to mobilize in solidarity with the workers of Colombia and denounce in the streets the imperialist administration of Joe Biden and the imperialist oppression of Duque and the Colombian Government. As the U.S.-trained police forces in Colombia show, the fight against state terror and repression is international. The working and poor of Colombia are providing an important and powerful reminder that it will take international resistance to defeat U.S. imperialism and the violent capitalist system it serves.