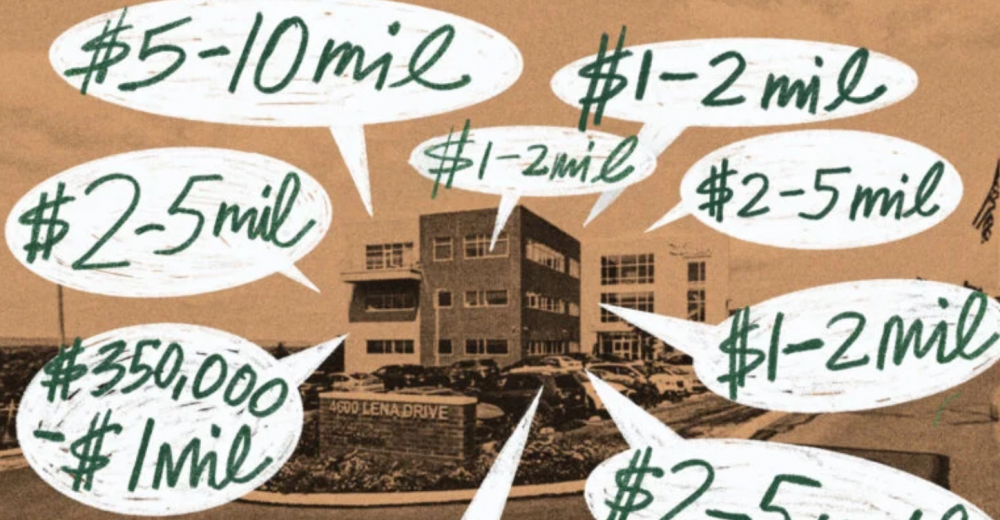 How Big Businesses Got Government Loans Meant For Small Businesses

ProPublica found at least 15 large companies that received over half a billion dollars in PPP loans using the same technique: Getting multiple loans sent to smaller entities they own.

The Paycheck Protection Program was launched to rescue the little guy, the millions of small businesses without the deep pockets needed to survive the COVID-19 shock.

But among the restaurants, dentists and mom-and-pops was Vibra Healthcare, a chain of hospitals and therapy centers spread across 19 states with over 9,000 employees. The biggest PPP loan was supposed to be $10 million, but Vibra found a way to land as much as $97 million.

In other contexts, Vibra boasts annual revenues of $1 billion, but when the company got in line to receive what is essentially free government money (the loans are forgivable), it made itself seem small. From Vibra’s corporate address in Pennsylvania, 26 limited liability companies received PPP loans, 23 of them from the same bank, with almost all the loan approvals coming on the same day in April.

ProPublica found several other large businesses employing the same apparent strategy of counting each of their LLCs or other entities as a separate business. In Las Vegas, a casino operator backed by hedge funds got 20 loans. Two nursing home chains received tens of millions of dollars: One chain in Illinois got loans for 51 different entities, while another based in Georgia got 19. Together, ProPublica was able to identify up to $516 million that flowed to just 15 organizations.

ProPublica’s findings bring into sharper focus how companies with thousands of employees were able to get assistance, just as some small businesses were reluctant to even apply. So far, the PPP has paid out more than $517 billion to 4.9 million companies — loans that can be forgiven if used to cover payroll, rent, mortgage interest or utilities. It was among the most generous of programs for businesses in the CARES Act. Loan programs for medium and large businesses spelled out in the bill generally were not forgivable. Appraisals of the PPP by economists and policymakers have been mixed: While the program did inject hundreds of billions into the economy, it did not do so efficiently, often sending aid where it was less needed, and going through banks meant well-connected businesses had a far easier time getting their share.

Amanda Fischer, policy director of the Washington Center for Equitable Growth, said there should have been enough money available to help every company quickly — even those with large payrolls. “But if we’re not going to do that, I do understand concerns about businesses that don’t technically comply, and it’s not a good look.”

“It’s Congress’ fault,” she said. “We should have helped everyone, or targeted the neediest businesses instead.”

The Small Business Administration generally defines small businesses as those with 500 employees or fewer. Congress carved an exception into the CARES Act for restaurants and hotels, allowing them to count each location as its own business, but after large restaurant chains like Shake Shack disclosed they’d taken PPP loans, the Treasury Department responded to the uproar by changing the rules to set $20 million as the maximum any one corporate group could accept. Businesses that had taken more, the government said, had to give the money back.

The chains we identified were not restaurants or hotels, but experts told ProPublica that, without knowing all the details of an entity’s control, it is difficult to say definitively whether a company had broken the program’s rules.

Fifty-one separate limited liability companies or other business entities tie back to the headquarters of Peoria, Illinois-based Petersen Health Care, which runs nursing homes and other health facilities in the region. The loans would secure at least 6,200 jobs, records show, which would total more than $52 million if the chain got the maximum amount of funding. (When the SBA released information about PPP recipients last week, it only provided ranges for the amount of each loan.)

At least 30 of those entities are nursing homes or care facilities in Illinois, according to state business documents and data from the federal Centers for Medicare and Medicaid Services. More than a third were given Medicare’s lowest 1-star rating, which the government considers “much below average” when examining health inspections, staffing and other quality measures. The loans would support about 1,900 jobs among those facilities.

The firm and its owner, Mark Petersen, did not respond to phone messages and emails seeking comment. A person who answered Petersen’s main number last week transferred ProPublica to the company’s legal department, which did not return a voicemail seeking comment.

In Maryland, a different set of 19 loan recipients traced back to an office park about 30 minutes north of Baltimore. Business records show most of those companies had another Georgia address, the home of Mariner Health Care Inc.

Mariner, which was acquired in 2004 by National Senior Care Inc. for $615 million, has 20 nursing homes and care centers in Southern California and the San Francisco Bay Area, according to its website. Those companies could receive as much as $31 million in maximum SBA funding, data shows, which could help safeguard more than 1,600 jobs.

Mariner did not answer phone calls at its main number, nor did the company respond to emails sent to an address on its website.

Another big beneficiary of the small-business program was Las Vegas-based Maverick Gaming, which has been on a casino-buying spree, backed by hedge funds, since it launched in 2017. The company owns and operates 26 casinos across three states. The company was valued at about $1 billion, Maverick CEO and owner Eric Persson told the trade magazine Global Gaming Business last year.

SBA data shows upward of $46 million going to Maverick’s companies, all of the loans arranged by the same bank. Persson, reached by phone, declined to comment.

Vibra, from its base in Mechanicsburg, Pennsylvania, specializes in hospitals that provide “post-acute” care to recovering patients. Its CEO, Brad Hollinger, has drawn on Vibra’s success to become a player on the international racing circuit: He’s a major shareholder of the British Formula One team Williams Racing. Although a car racing enthusiast, he said in 2015 that he’d bought into the team primarily for business reasons. “I am never in business not to make money,” he told Reuters.

The PPP loans are just one way the company has been buoyed by the CARES Act: Vibra hospitals have also received at least $13 million in grants for health care providers and $41 million in loans (in the form of advanced Medicare payments), according to Good Jobs First, a government and corporate watchdog based in Washington.

In publicity materials, Vibra refers to its hospitals and rehab centers as “affiliates,” but for purposes of the PPP, it appears to have treated all these LLCs as unrelated companies, receiving between $42 million and $97 million in total. Together, the companies reported retaining a total of 4,600 jobs.

Twice in recent years, Vibra has been penalized for bilking the government. In 2016, Vibra paid $33 million to the Justice Department to settle allegations that it had defrauded Medicare by admitting and keeping patients for unnecessarily long stays in order to drive up billings. Last November, Vibra paid $6 million more in a different settlement with the government; this time, it had allegedly billed Medicare for doctor visits that did not happen. In the settlements, Vibra did not admit to any wrongdoing.

There are signs that Vibra is weathering the COVID-19 outbreak well. Last month, the company announced it would manage a new hospital being constructed in Bakersfield, California. The company did not respond to multiple requests for comment.

Generally, the SBA looks at “the entirety of the organization” in determining whether businesses should be considered affiliates or separate businesses, which means taking into account “common ownership, intertwined management and economic dependence between entities,” said Megan Jeschke, a partner at the law firm Holland & Knight. In her experience defending companies accused of violating the affiliation rules, the SBA has tended to be “rigid” in interpreting the rules and frequently finds that apparently related companies are in fact affiliates, she said.

After large businesses were revealed to have taken PPP money, Treasury Secretary Steven Mnuchin said in late April that the SBA would conduct a “full review” of each PPP loan of $2 million and up. As of last week, about 29,000 such loans had been made. Given that volume, it’s unclear just how thorough the reviews might be. The SBA did not respond to a request from ProPublica seeking comment.

Last week, following pressure from watchdog groups and Congress, the Trump administration disclosed only those entities that were approved by banks for loans over $150,000. A consortium of news organizations, including ProPublica, had sued the administration under the Freedom of Information Act to release the full list of recipients and loan details.

“The vast number of PPP grants went to truly small businesses — but a lot of the money went to big businesses,” said Aaron Klein, policy director of the Brookings Institution’s Center on Regulation and Markets. “The media attention is going to focus, and crystallize, how much big businesses got out of this program.”