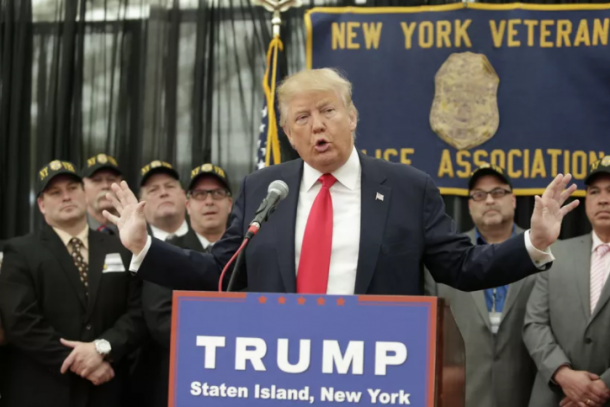 Above Photo: Kena Betancur/AFP via Getty

President Trump’s latest executive orders are a show of support for police.

They’re symbolic, but that doesn’t make them pointless. Trump is picking a side in a culture war that’s arisen in the past few years, with advocates for racial justice and improvements in police-community relations on one side, and law enforcement officers (and their supporters) who fear “anti-police” reforms on the other.

There’s no reason that “Black Lives Matter” and “Blue Lives Matter” should necessarily be in conflict, because there’s no necessary trade-off between improved police-community relations and officer safety. It’s the Blue Lives Matter side that’s decided the two are zero-sum — and that any implication that police could do more to help communities of color puts officers in danger.

By ordering the federal government to come up with new ideas for reducing crime and protecting law enforcement, President Trump is sending the signal that he agrees the two sides are in conflict — and he’s picking team blue.

Trump’s nascent governing coalition has few organized interest groups — very few entities that have experience using leverage with government officials to get what they want, and that actually have leverage with these particular officials.

Accordingly, the organized interests that do have clout in Trumpland have less competition (and more influence) than they would under another president.

One of those tentpoles of the Trump coalition is law enforcement: the unions representing local police and federal immigration agents and the rank-and-file, front-line public safety officers of America.

The unions representing Border Patrol and Immigration and Customs Enforcement agents made their first presidential endorsements to back him. Trump appeared on the Border Patrol union’s podcast in July. The president of the Fraternal Order of Police testified in support of attorney general nominee Jeff Sessions’s nomination hearing.

In one (unofficial) survey, three-quarters of law enforcement officers backed Trump. Before the election, San Antonio police got disciplined for wearing “Make America Great Again” hats when they came to greet Trump on a campaign stop. After the election, a University of Virginia police officer was forced to resign after he used his car’s PA system to blast “Make America Great Again” through campus.

But the power that law enforcement officers have as an interest group isn’t nearly as great as the power they have as cultural heroes to many other Americans. Support for law enforcement has become a form of identity politics allyship for many white and conservative Americans: a way to argue against progressive policies and attitudes by speaking on behalf of a marginalized group.

It’s long been accepted — in practice, if not in policy — that the No. 1 job of law enforcement officers is to keep themselves safe, and that they ought to be allowed to do whatever it takes to ensure that. From that perspective, any attempts to restrict the power of police officers — whether from management or from the public — are rules imposed from the outside that could render officers unable to defend themselves. They are, or could be, threats to officers’ lives.

Combine this with a couple of high-profile ambush-style attacks on police — the murders of officers Wenjian Liu and Rafael Ramos in New York in December 2014, and the attack that killed six Dallas police officers in June 2016 — and you have the germ of a powerful idea: that criticism of police officers puts their lives in danger.

This is an idea that’s been put forward, broadly, by conservative analysts like Heather Mac Donald, who’s championed the “Ferguson effect” theory — that protests in response to high-profile police shootings end up empowering criminals and demotivating police. It’s encouraged by cable news coverage that has often conflated calls for reforms to police departments with “anti-police” sentiments, and blurred the lines between peaceful protest and riot — giving many suburban Americans the idea that the “inner cities” of America are grotesquely unsafe.

And it’s led to the adoption of “Blue Lives Matter” as a response to “Black Lives Matter,” in slogan and in sentiment, by Republicans — especially the law-and-order, racially conservative Republicans who make up the core of Donald Trump’s supporters.

Speakers (including Sheriff David Clarke of Milwaukee, who’s accused the Black Lives Matter movement of trying to undermine America from within) led Republican National Convention attendees in “Blue Lives Matter” chants. Blue Lives Matter bills that would make it a hate crime to target a police officer have already been passed in Louisiana — where the law has been used to arrest at least one protester — and are under consideration in other states. (One of the executive orders Trump signed Thursday appears to call for Congress to pass such a law at the federal level as well.)

The animating idea is that law enforcement officers, under President Barack Obama, were a persecuted group — the public hated them and would jump on them for any minor error, and the federal government was more interested in scrutinizing them than supporting them.

By supporting civil rights inquiries into the Ferguson and Baltimore police departments and expressing an interest in improving police-community relations, President Obama had, by this view, chosen “the side” of the disorderly protesters. And therefore, it was only appropriate for President Trump to choose “the side” of the police.

This White House has chosen blue lives over black

In practice, the Trump administration can do little to boost the power of police officers; policing is still primarily a state and local issue. (There’s a reason that Thursday’s executive orders don’t actually change anything the government is doing, and punt it to “task forces” to figure out if there’s anything more it can do at all.)

What the Trump administration can do, and is doing, however, is pare back federal oversightof law enforcement. Sessions’s Justice Department appears likely to refrain from investigating (much less suing) departments it might otherwise have investigated for civil rights violations. It’s also likely that Sessions and Trump won’t share the interest that Obama and his attorneys general had in supporting research into police-community relations and shaping existing research into best practices.

The absence of monitoring, or of efforts to teach law enforcement what to do better, is one form of tacit support. Symbolic gestures like task forces are another.

Both serve to send a message to police who feel they have to be aggressive in order to do their jobs: We understand, and you should do what you have to do. Instead of encouraging police to see the people they interact with as members of the community they serve, they encourage police to think of themselves as antagonists to criminals — and to do whatever it takes to stop the criminals and potential criminals they meet.

The Trump administration’s executive orders should be seen as nothing more and nothing less than this: a signal to law enforcement officers that the White House is on their side against public criticism; that they should feel free to do whatever they feel is necessary to keep themselves safe first, and the public safe second.

That’s a message that police will take to heart.