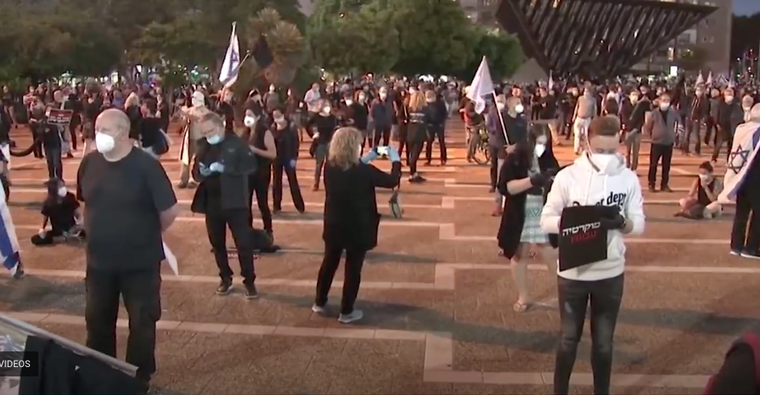 How Do You Protest When You Can’t Take To The Streets?

Cyberspace has become the main arena for social movements, as digital tools are used to help activists and citizens communicate, organize, and mobilize.

Coronavirus and quarantine measures have posed significant challenges for social movements at a time when governments are taking important decisions on people’s lives as well as living conditions. Citizens experience high degrees of anxiety and uncertainty, brought on by risks to health and economic well-being. As governments scramble to respond to the pandemic, its unequal impact on citizens becomes ever more visible, as do the discrepancies between different nations’ government strategies, their effectiveness, and the degree of legitimacy they elicit from their publics.

Whereas New Zealand’s Covid-19 response met with great public support and was extremely effective, the UK witnessed a seriously delayed and chaotic response, and extremely high infection and death rates, with 66% of the public feeling the government took too long to react. The coronavirus crisis has made visible existing social problems and inequalities and ushered forth new causes for citizen concern. It has become clear that the impact of the coronavirus has left some communities, such as communities of colour, much more vulnerable than others, and that the poor are the hardest hit, least able to practice social distancing and to stay at home.

Austerity policies following the global financial crash have underfunded health care systems and schools, a problem that has burst into public awareness as hospitals are overcapacity, medical staff have insufficient personal protective equipment (PPE), and schools are struggling to deliver children’s education during lockdown with limited resources. As we face a global depression, this situation is likely to deteriorate further, and millions have already lost their employment.

The urgent need to respond to the crisis has also provided a justification for increasing state powers that threaten individual rights and freedoms, and concerns over forms of citizen monitoring such as contact tracing apps and risks to human rights activists have grown. Even state economic stimulus measures are under scrutiny, as trillion dollar corporate bailouts such as those in the US or the UK raise serious questions about democratic oversight and who will primarily benefit from them – corporations or citizens.

Citizens and social movements clearly have a lot to discuss, critique, and protest, but how to mobilize when you can’t take to the streets?

The spatial forms of protest and organization have shifted in response to the pandemic’s quarantine restrictions. Some creative protesters, such as those in Israel protesting Netanyahu and the erosion of Israel’s democracy, have observed an entirely new form of “social distancing protests.” But these are the exception, not the norm.

City dwellers have used their balconies as vantage points for citizen journalism, documenting police brutality and violence during quarantine enforcement on their mobile phones and circulating the footage via social and digital media. Balconies have also been sites for solidarity rituals, such as clapping for healthcare workers, a grassroots initiative that emerged in Spain and Italy following a campaign launched on social media, which later spread to other countries. While at heart it is a show of appreciation, it also helps call attention to the lack of Personal Protective Equipment available to many healthcare professionals, and the underfunding of healthcare in many states.

In some countries, such as Lebanon, communities that cannot provide for their families if they stay home have defied lockdown and taken to the streets demanding state help. Millions of the global poor face hunger as lockdowns and social distancing eliminate work and disrupt agricultural production. Previously mobilized networks calling attention to economic inequality issues have been reactivated in the face of this new crisis, also engaging in solidarity work to fill the gap left by lack of government provision.

Above all, cyberspace has become the main arena for social movements, as digital tools have been used to help activists and citizens communicate, organize, and mobilize. Digital activists circulate tool kits and resources for mutual aid societies geared for the less tech savvy. Activists in a range of social movements resort to a shift in their usual mix of on and offline communication to 100% digital connection, making use of the many apps available to them. Citizens concerned about insufficient government responses or premature release from lockdown take to Twitter with hashtags like #KeepTheLockdown. Critical alternative media activists work to refute coronavirus misinformation and bogus “cures”.

Solidarity and mutual aid groups use WhatsApp and Slack to organize, using the logic of collective self-empowerment, much as they did with food banks in the last global financial crisis. Groups like Doctors without Borders encourage information sharing as scientists race to find a vaccine and more effective treatments, and pressure pharmaceutical companies to share patents, a stance that highlights the larger issues voiced by the Open Access and Open Knowledge Movements.

But even the need to revert to digital resources during the lockdown highlights some troubling realities. It reveals the dramatic digital divides between rich and poor, young and old, urban and rural. Unequal access to digital resources means the very communities most affected by the coronavirus are least equipped to respond to it, as they have less access to health or economic support information, less digital literacy to make sense of and navigate it, and less connectivity to protest measures they disagree with or to call attention to their plight.

The global coronavirus pandemic has brought forth new challenges and opportunities for social movements, while making more visible longstanding inequalities and structural problems they have longed mobilized against.

As the drama unfolds, activists have an opportunity to use the crisis to draw attention to a host of other issues made visible by it, such as our reliance on undervalued care workers and the precarious conditions they work in; the radical drop in air pollution and the reclaiming of our streets by wildlife oblivious to the ravages of the pandemic; the lack of welfare state safety nets and insufficient funding for public services; the problematic nature of proprietary protections for knowledge needed to solve global problems; extreme global socio-economic inequality, and so much more. Coronatime is just beginning.