How Employees And Employers Get Bled By Health Insurance

Above photo: From the Backbone Campaign.

Yves here. We’re heavy on health matters tonight because the Trump/Ukraine scandal is eating the news. These stats on health insurance costs are damning. And remember these are averages, so think of what it’s like for those who pay even more than the nosebleed levels shown. Our earlier story tonight, on private equity, describes one of the big hidden forces behind the relentless cost rise. And it’s not just physicians’ practices. Private equity has been consolidating hospitals (with less economic success than they had hoped due to state regulation), dialysis centers, rehab centers, medical device makers…..oh, and J&J’s diabetes unit.

The poor prospects for stopping health care industry looting are the biggest reason I am seriously considering becoming an expat, although even the first steps, like figuring out where to go, is daunting.

Something is seriously wrong with this system.

The annual cost of the average health insurance family plan through employers — employer and employee contributions combined – rose another 4.9% in 2019, to $20,576. This is up 255% from 20 years ago, having soared five times faster than the Consumer Price Index (+52%). 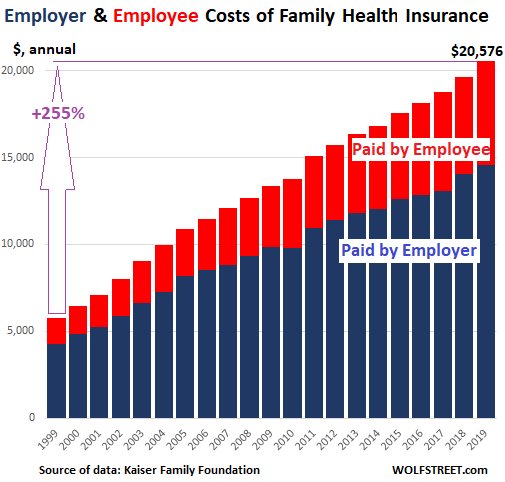 These are among the findings of the annual survey of over 2,000 companies, both small (3-199 employees) and large (200+ employees), including non-federal public employers, by the nonprofit Kaiser Family Foundation. Employers and employees both are groaning under the relentlessly ballooning weight of health insurance costs. And the numbers are large: 153 million Americans are covered by employer sponsored health insurance.

At companies with few lower-wage workers, the employee contribution for family coverage was on average $5,968 annually.

But at companies with many lower-wage workers, the employee portion for family coverage was $7,047 annually.

“The single biggest issue in health care for most Americans is that their health costs are growing much faster than their wages are,” KFF CEO Drew Altman said. “Costs are prohibitive when workers making $25,000 a year have to shell out $7,000 a year just for their share of family premiums.” 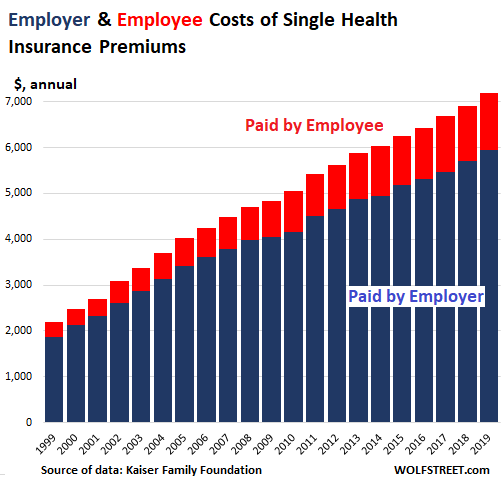 What the above chart shows is that over the past 20 years, the employee contribution to the average single plan has surged by 290%, compared to 52% for CPI. The employer portion has increased 200% over the same period.

Employers, who over the years have been straining to deal with the surge in these healthcare costs for their employees, have shifted ever more costs directly to the employee. This includes increasing the employee portion of the premium – see above. And it includes raising the deductibles (the portion of medical costs that the employee must pay before the insurance kicks in), copayments (fixed dollar amounts), and coinsurance (a percentage of the charge).

In terms of the deductible by itself, for employee-coverage only (single), the average annual amount in 2019 across all types of plans for employees who have a deductible rose by 5.2% to $1,655. Over the past 20 years, deductibles have increased by 183%: 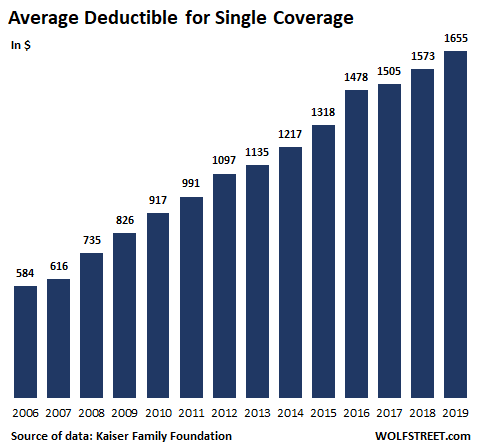 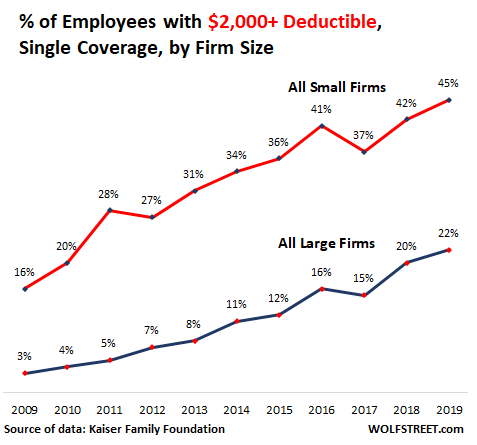 Health care and insurance are large parts of the US economy. Effectively cracking down on the costs of the system would by definition crush the revenues of the companies in that system. And some of those companies would have to restructure and others would disappear.

But in terms of the overall economy, employees and employers would spend or invest the money that they saved on health care and insurance. For employers, it could mean money would be available to expand operations, hire more people, and pay higher wages.