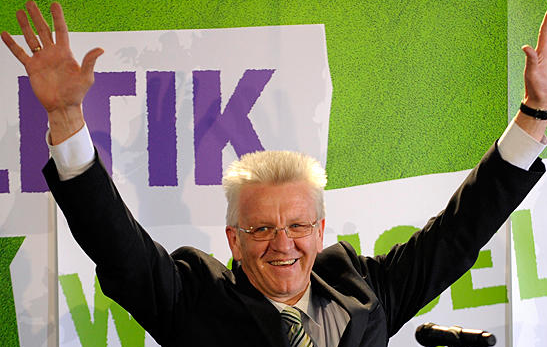 How Germany’s Greens Rose From Radical Fringe To Ruling Power

They didn’t. In fact, in a turn of events reverberating across the nation, the Greens on Sunday ended six decades of conservative rule in one of Germany’s wealthiest states, completing their transformation from a radical protest party to a mainstream force shaking the traditional political order.

“To see the party go from that to this … is a sign that it has a strong chance in the federal elections,” says Miranda Schreurs, head of the European Environmental and Sustainable Development Advisory Councils, a Berlin-based network of advisers appointed by 16 European countries.

For the first time ever in Germany, and only the second time in European history, a Green will be prime minister of a major regional state. “It’s a new political era,” says German Green party leader Claudia Roth.

Capitalizing on a mix of nuclear aversion and local furor over a highly unpopular railway project in Stüttgart, the Greens doubled their representation to 24.2 percent in Baden Württemberg, stealing power from Chancellor Angela Merkel’s ruling Christian Democratic Union (CDU). The Greens were also the clear winners in the state of North Rhine Westphalia, where they tripled their share of the vote and weakened the Social Democratic grip.

The nuclear issue “fell into their laps. It was like a lucky kiss from heaven,” says David Conradt, a specialist in German politics at East Carolina University in North Carolina. “They’re benefiting from the mistakes from everybody else.”

Germany’s antinuclear, environmentalist tradition has deep roots. Ironically, nowhere is it better displayed than in Baden Württemberg, which as home to Daimler and Porsche is known as Germany’s “No. 1 Car Region.”

An hour’s drive from Stüttgart’s Daimler headquarters, at the edge of the Black Forest, the university towns of Freiburg and Tübingen have in the past decade both elected Green mayors, forming political counterweights in a conservative stronghold that Mrs. Merkel’s party ruled for 58 years.

In the 1970s, Freiburg became the cradle of Germany’s anti-nuclear movement after local activists killed plans for a nuclear power station nearby. The battle brought energy-policy issues closer to the people and increased involvement in local politics.

Freiburg also revolutionized behavior by making its medieval center more pedestrian-friendly, laying down a lattice of bike paths and introducing a flat rate for tramways and buses.

Environmental research became a backbone of the region’s economy, which boasts Germany’s largest solar-research center and an international center for renewable energy. “This Green model based on renewable energy and quality of life, and not only on GDP growth, is moving beyond the city to the regional level,” says Ms. Schreurs. ”It’s become mainstream.”

That was not the case 30 years ago.

The German Green party was born in the late 1960s with young, rebellious students trying to shake the political establishment. In the 1970s, the Greens became a platform for antinuclear protests. In the 1980s, they embraced the antiwar movement.

“We had nothing materially but had everything in terms of ideals,” Lukas Beckmann, who cofounded the Green Party in 1980, told German newsmagazine Der Spiegel. (Mr. Beckman is now on the board of directors of a GLS, a bank specializing on green and social projects.)

Many times the Greens’ future looked grim. Each time they bounced back. At times in the 1990s, they lacked any representation in parliament. But over the years, they won mayoral battles in significant German cities and returned politicians to parliament.

Meanwhile, tensions arose between the party’s idealists and realists. Joschka Fischer grew to embody the party’s “Realos.” He was a sneaker-wearing demonstrator in the 1960s, even caught on video throwing stones. But as foreign minister in a coalition government with the Social Democrats from 1998 to 2005, Mr. Fischer brought Germany into the Afghanistan war and drafted welfare reform that cut unemployment benefits, leading some to accuse the Green party of betraying its core values of social justice and pacifism.

In 2000, the “Red-Green” coalition hammered a historic deal to put an “irreversible” end to nuclear power. It was a triumph for the Greens, but with the nuclear issue seemingly resolved, the party lost a key campaign platform.

The Greens moved back into the opposition in 2005 with Merkel’s rise to the chancellorship. Her U-turn this past fall on nuclear energy – when she extended the lives of the nation’s 17 nuclear power plants – galvanized antinuclear sentiment. In October, hundreds of thousands of demonstrators blocked the transport of radioactive waste into Germany’s controversial Gorleben storage plant. Protests continued into this month.

When the Japan nuclear crisis erupted March 11, Merkel pivoted on nuclear energy by temporarily shutting down seven aging reactors and vowing to permanently close the oldest of them.

But it wasn’t enough, and she admitted as much today.”The debate in connection with the Japanese nuclear plant of Fukushima was clearly what led to our defeat. My view of atomic energy has changed since the events in Japan,” she said, calling the defeat a “deep wound” for her party and home state.

Matthias Jung, head of the Mannheim-based polling center Electoral Research Group, says the Greens profited from decline in party loyalty among German voters and tapped into grass-roots protest movements. And it’s not just Baden-Württenberg: Nationwide polls have showed 30 percent of people could imagine voting for the Greens.

Critics say the Greens have often had the luxury of opposing government without providing solutions. But their win underscores that the public is also unhappy with the government’s solutions.

“Now the Greens will need to show that they can deal with issues others than their area of expertise. That they can make compromise,” says Schreurs. “They’ll need to prove that they’re more than a niche party.”

Professor Conradt agrees: “Now they have to show that they can govern.”