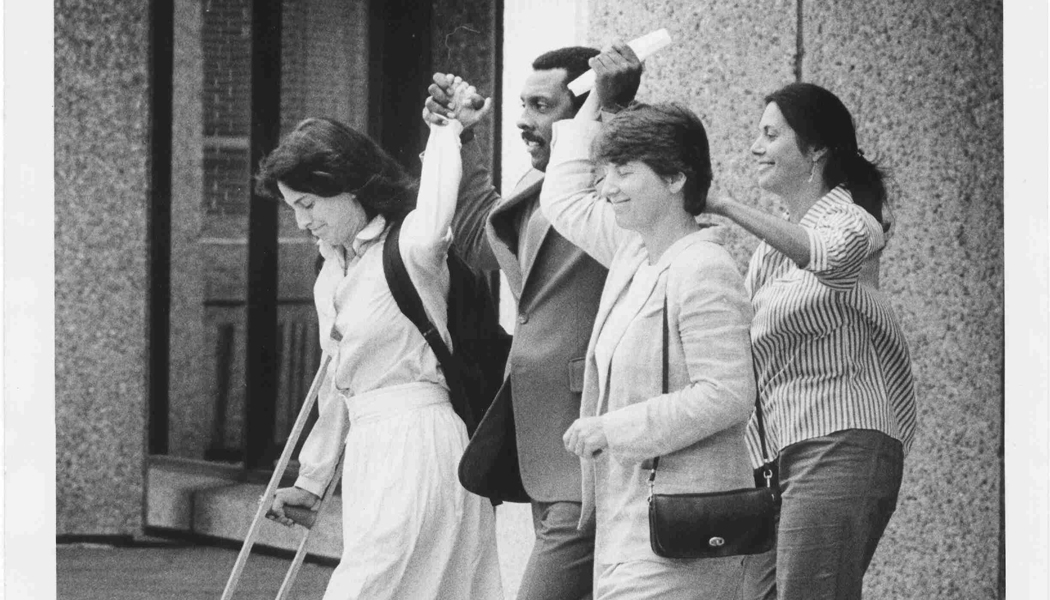 How Greensboro Massacre Survivor Taught The Next Generation To Fight

Above Photo: Marty Nathan with other survivors of the Greensboro Massacre after winning the civil suit against the City of Greensboro, 1985. From left to right: Marty Nathan, Nelson Johnson, Dale Sampson, and Signe Waller. Elliot Fratkin.

The Ku Klux Klan murdered five of her comrades and the father of her six-month-old child.

She remained undeterred in her activism for the rest of her life.

On November 3, 1979, Marty Nathan, Mike Nathan, and other members and supporters of the Communist Workers’ Party were stationed along the route of a “Death to the Klan” march in Greensboro, North Carolina. This multiracial working-class movement’s success organizing textile and hospital workers had attracted the attention of the Ku Klux Klan; “not surprisingly,” Marty explained, “the Klan began to rise in 1979 … [in places] where hard-hitting union organizing and strikes were occurring.” Not only were workers and organizers faced with resistance and threats from employers – they were also confronted with the Klan’s virulent racism, violence, and its efforts to spread fear and confusion as the Klan ran their own recruiting drives in the textile mills to split up the unions and grow its base.

The march, in Marty’s words, “was a response to a threat against unionization by the Klan, which would historically split up workers, black and white, threaten the leaders and essentially act on behalf of the corporate owners.” One of the key organizers of the march, Reverend Nelson Johnson, added that “it was absolutely necessary to have some expression of opposition to racism as manifest by the Klan in order to continue with the work of labor organizing in the textile industry and in order to continue with the work of uniting people from different racial backgrounds.” So, on November 3, 1979, the CWP organized a conference about the Klan and labor organizing, kicked off by the Death to the Klan march.

Marty and her comrades would later find out that the Klan had worked with the Greensboro police, a Bureau of Alcohol, Tobacco, and Firearms agent, and an FBI informant beforehand, which provided the Klan with the route of the march and encouraged them to carry arms while the police mandated that the protestors be unarmed. Before long, the Klan descended upon the march, at that point embedded in the predominantly black neighborhood Morningside, with no police in sight – in fact, a rank and file officer responding to an unrelated call in the neighborhood had been told to clear the area hours before the attack.

As protestors stood on the street, a caravan of nine cars decorated with confederate flags and other paraphernalia approached. The klansmen attacked the protestors, first with sticks and then opening fire, killing five of them and injuring ten others. Marty and her husband Mike Nathan were both doctors stationed at the march to provide medical assistance if needed; she was posted at a later point along the march route running the first aid car when the attack took place and survived the massacre, but Mike, stationed in Morningside, did not. She would rely on her comrades to find out what happened to her husband that day.

In Marty’s words, the premeditated attack killed people who “were organizing unions. They were revolutionaries. They were socialists. And they knew that in order to change society, you have to have an organized working class.” Not only did this movement unite white and black workers with a clear vision, but it understood the importance of internationalism; after the massacre, the survivors linked this “North American death squad” to the death squads in Central America, North America, and South Africa, up to the genocidal violence perpetrated under Jair Bolsonaro’s Brazil taking place today (later in life, Marty would at times wear a ring from Brazil’s Landless Workers’ Movement that had been gifted to her “on my middle finger, which I give to Trump,” she told me).

“After you lose somebody, there’s nothing else that you can lose. But what you can hope in all this is that you can change the future. For victims of racist violence, white supremacist violence, that’s the goal,” Marty told Democracy Now’s Amy Goodman on the 40th anniversary of the massacre. “In a time of climate change, threat of nuclear war, and increasing economic disparity, we all have to be in the streets, and we do not want to get shot,” she said. Marty continued to fight against racism and imperialism and for justice even in her last days before passing away on November 29, 2021 from lung cancer and heart disease; she was profoundly shaped by her work with the CWP and by the massacre, and those experiences continued to shape the people around her throughout her life.

Anyone who knew Marty would not be surprised to know that she was undeterred by the attack of the KKK that murdered five of her comrades and took away the father of their then six-month-old child. She fought tirelessly alongside the other survivors and their comrades to expose the direct connection between the KKK, the police, the FBI, and the Bureau of Alcohol, Tobacco, and Firearms, which also had an informant embedded in the Klan and was aware of the attack before it happened but failed to take any steps to prevent it.

Not only had the police given the protestors’ march route to the klansmen; they were present at the massacre in the tenth car following the caravan in an unmarked police vehicle but did nothing to stop the massacre. Marty and the other survivors successfully proved this and other acts demonstrating the complicity of the police, city, and FBI in the massacre, finally winning a $351,000 civil lawsuit in 1985 after having lost two criminal trials in which the prosecution was more focused on prosecuting the communist victims and survivors of the massacre than the Klan. Only in 2020 would they receive a long overdue apology from the City of Greensboro. Though Marty and her daughter were the only ones awarded money in the settlement, Marty gave her settlement to the other survivors and co-founded the Greensboro Justice Fund in 1980 and, in 2009, the Markham Nathan Fund (MNF) in Mike’s memory to fund grassroots organizations to carry the work forward.

By the time Marty passed away in November 2021, she had fundamentally shaped the organizing landscape in her home of Western Massachusetts, where she moved in 1995. Even when people couldn’t stand each other, everyone seemed to love Marty. She believed in uniting people from a wide range of perspectives, but she never compromised her politics in moments of disagreement. She canvassed for the re-election of Congressman Jim McGovern along with other local officials, and when it came time to hold people to account, she did so unapologetically.

Even as her health faltered in the months and years before she passed away, Marty joined other anti-imperialist activists to call on Congressman McGovern to shift his position on Palestine and to work to lift the sanctions against Venezuela or, in her words, “to inhabit his own skin … – an understanding and compassionate one – … and tell him that he has to follow through because this is not a theoretical issue. This is an issue of people in Venezuela dying everyday… because of the sanctions.” It is in large part thanks to Marty’s work that Congressman McGovern did just that in a letter dated the day of that rally, cited as “the best letter that we’ve ever seen out of Congress on sanctions period” by Alexander Main of the Center for Economic and Policy Research, a leading source of research and data on the sanctions.

Not only was Marty a fierce and dogged leader and mentor: she was also the people’s doctor. During her days in the CWP, she ran clinics at Duke Hospital to treat textile workers with brown lung disease caused by the cotton particles they inhaled on the job. In the weeks before her death, she stood with migrant workers at a press conference not only as a speaker but as a doctor, rushing over to a ditch to mend someone’s twisted ankle during the event. After moving to Massachusetts, she co-founded La Cliniquita, where she worked as a doctor primarily for immigrants and undocumented patients for 18 years, building an infrastructure to provide quality care that did not exist until she moved to the area for communities that had been systematically deprived of health care. At her memorial service, her former patients spoke about what she meant to them not only as a doctor but as a friend to whom she opened her home over the years. In 2012, she co-founded Climate Action Now as well as the climate justice group 2degrees and went on to help win the decades-long fight against a proposed biomass plant in Springfield, MA in 2021, always keeping climate justice at the heart of her work and revolutionary organizing at the heart of her life.

Marty’s list of accolades is unending, but those who knew her know that her ability to bring people together and lift up and mentor those around her, her refusal to give up no matter the obstacles or danger that she faced, and her unrelenting determination to fight for justice are irreplaceable. As Marty said, “after you lose somebody, there’s nothing else that you can lose. But what you can hope in all this is that you can change the future.”