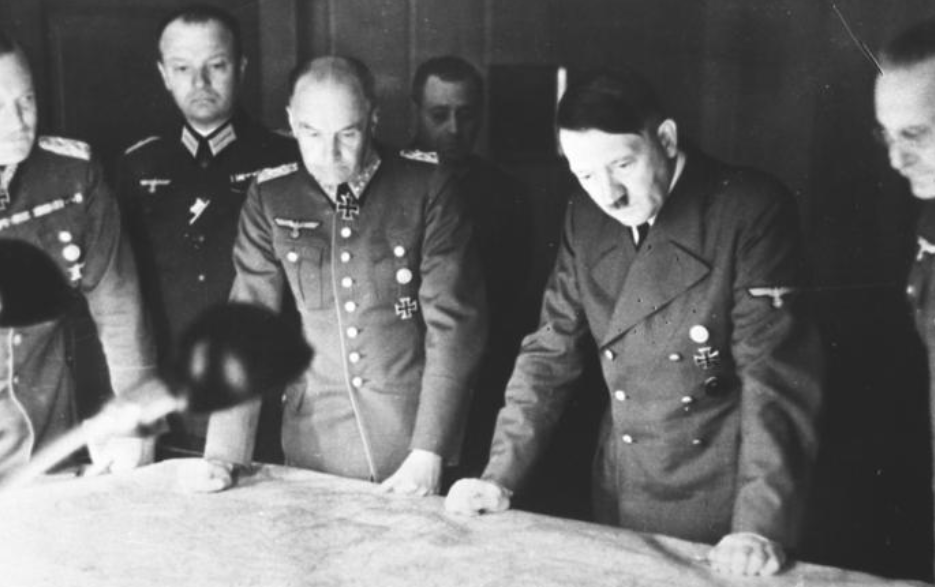 How Hitler Found His Blueprint For A German Empire

By looking to the American West.

On Indigenous Peoples’ Day, Americans must recognize the ugly history of how the Nazis were inspired by the long and brutal U.S. campaign against Native Americans.

Native peoples in the United States continue to struggle for justice. While this year brought some important victories, such as Washington’s NFL team finally dropping its racist name and logo, and a landmark win in the Supreme Court for Native rights in McGirt v. Oklahoma, the difficult work of recognizing and redressing the country’s legacy of oppressing its first inhabitants continues.

Efforts by Native and allied activists to spread observance of Indigenous Peoples’ Day as an alternative to Columbus Day is an important part of this work. The day is an opportunity not only to celebrate Native voices and culture, but for the country to rethink its own history in light of Indigenous American experiences. While much of this rethinking, as it should, centers on the brutal treatment of Native peoples across American history, Indigenous Peoples’ Day also offers an opportunity to reflect on less well-known legacies of this brutality beyond the United States itself.

Perhaps the most appalling of these legacies is the way Adolph Hitler and his regime consciously drew on U.S. actions toward Native Americans as a model for their murderous campaign in Eastern Europe during World War II. This is a connection explored by recent historians of Nazi Germany and detailed most comprehensively in Carroll Kakel’s “The American West and the Nazi East.” (For a related account of how American immigration, segregation and eugenics policies influenced the Nazis, see James Whitman’s fascinating “Hitler’s American Model.”)

Hitler’s overriding strategic goal in launching World War II was stretching Germany’s borders eastward to encompass most of Europe. This quest for Lebensraum, or living space, to the east was his central preoccupation. He envisioned a vast German empire extending through the Baltics, Poland, Ukraine, Belarus and Russia — all the way to Europe’s end at the Ural Mountains. This empire would be gradually cleared of its former inhabitants and populated instead by rugged, self-reliant German farmers growing food to feed a great continental power.

World War II, then, was above all a war of colonial expansion. At a time when European countries still ruled much of the world, justifying such rule by claims of racial superiority and using brutal methods to extract wealth and crush dissent, Hitler had many models to look to for inspiration. Belgium, for instance, killed or worked to death an estimated 10 million people during its four decades ruling Congo.

His focus, however, was not on overseas colonies, which Germany had never acquired to the same extent as other powers, but on a contiguous, land-based empire annexed to the German homeland itself. As Hitler said, “Our colonial territory is in the east.” His was a vision of what historians call “settler colonialism,” in which an area’s original inhabitants may be exploited temporarily but are ultimately replaced by the conquering country’s own people.

This form of colonialism is inherently “eliminationist” — in that, one way or the other, native peoples, considered racially inferior, become superfluous and “disappear” in order to clear the land for settlers from the imperial power. This is why the United States was Hitler’s chief inspiration. It was, according to the Holocaust historian Timothy Snyder, “the exemplary land empire” on which the Nazis based their vision of colonizing Eastern Europe.

What did Hitler see when he looked to America for inspiration? After pioneering settler colonialism in Ireland, the British brought it to North America with devastating effect as colonists displaced Indigenous inhabitants. These same colonists made more rapid westward expansion a primary justification for the Revolutionary War against Britain, citing it specifically in the Declaration of Independence. Indeed, one of the largest military actions of the war was the Continental Army’s attack on the Iroquois Confederation. After George Washington ordered the “total destruction and devastation of their settlements” so they would be “driven” out by “terror,” the American military established its pattern for the next century by expelling Native people from their homeland through a campaign of brutally indiscriminate violence.

After independence, Thomas Jefferson popularized his vision of an agrarian empire of virtuous yeoman farmers gradually overspreading the entire continent. As for what he called the “doomed red race,” Jefferson wrote that those not willing to leave would “be exterminated, or driven beyond the Mississippi.”

He and political leaders who followed him used threats of war, or war itself, to acquire new territories from France, Spain, Britain and Mexico, opening them up to white settlers. As these newcomers moved in, a combination of regular army troops, paramilitary units called “rangers” and vigilante groups of settlers themselves pushed Native peoples off the land. Their methods included mass shootings, rape, burned villages, destroyed food supplies and forced marches. The result was rapid depopulation by murder, starvation, disease, exposure and expulsion.

As this pattern moved beyond the Mississippi and land grew scarce for further removals, the American government began concentrating the remaining Natives on “reservations.” On this marginal land, unsustainable living conditions continued to dramatically reduce their numbers. One government official called the reservation system “the legalized murder of a whole nation.”

Aside from Native peoples themselves, this process enjoyed wide public support. It was, in Jane Cazneau’s famous formulation, part of the country’s “Manifest Destiny.” As racially inferior, uncivilized “savages” who did not make productive use of the land, it was inevitable that they would “disappear” as white settlers moved in. As an 1854 article in DeBow’s Review put it, their “race is run” and are “gradually disappearing, to give place to a higher order of human beings.” Andrew Jackson viewed Native Americans as a “disease” that was “constantly infesting our frontier” and needed eradication. In the 19th century, white Americans commonly used the term “extirpate,” meaning to clear away by uprooting, destroying or annihilating, when referring to Native Americans.

All of this makes it unsurprising that in looking for a blueprint for the European East, Hitler found it in the American West. In Snyder’s words, the American example was one of the “source mythologies” of the Nazi’s eastern project.

Hitler grew up reading Karl May’s American western novels for young people, which featured tales of taming the “Wild West” through “Indian wars.” He also regularly re-read them into adulthood, even recommending them to his generals as sources of creative ideas. Writing in “Mein Kampf” in the 1920s, Hitler praised the way the “Aryan” America conquered “its own continent” by clearing the “soil” of “natives” to make room for more “racially pure” settlers and lay the foundation for its economic self-sufficiency and growing global power. Indeed, the concept of Lebensraum was coined and popularized by Friedrich Razel, who said his theory of colonization and racial replacement drew inspiration from the American historian Frederick Jackson Turner’s “frontier thesis” and its identification of “colonization of the Great West” as central to American history and identity.

Once the Nazis gained power in Germany, Kakel details how the American West became an “obsession” for Hitler and his closest followers, such as SS leader Heinrich Himmler. Their goal was to remake the demographics of Europe the same way the United States remade the demographics of North America. The Nazi leadership routinely referred to Eastern Europe as “the German East” or the “Wild East,” and its inhabitants as “Indians.” Admiring how the United States had “gunned down the millions of Redskins to a few hundred thousand, and now keep the modest remnant under observation in a cage,” Hitler spoke of his intention to similarly “Germanize” the east “by the immigration of Germans, and to look upon the natives as Redskins.” Echoing American justifications for westward settlement, he stated, “It is inconceivable that a higher people should painfully exist on a soil too narrow for it, whilst amorphous masses, which contribute nothing to civilization, occupy infinite tracts of a soil that is one of the richest in the world.” His answer? “Here in the east a similar process will repeat itself for the second time as in the conquest of America.” For Hitler, “Our Mississippi must be the Volga.”

As in the American case, Hitler used threats of war and then war itself to gain territory in the east. Then regular army troops, paramilitary units called “Einsatzgruppen,” and collaborating locals began killing, terrorizing and expelling inhabitants considered racially inferior. A “Hunger Plan” envisioned mass starvation, mainly of Slavs. Meanwhile, the SS drew up plans to expel all European Jews to a massive Judenreservat, or “Jewish reservation,” either in Madagascar (once British control of the sea lanes was defeated) or Siberia (once the Soviet Union was defeated). Most were expected to die of disease and starvation.

After the invasion of Poland, Germany quickly annexed part of the country and began the process of moving in ethnic German and other sufficiently “Aryan” settlers. Nazi propaganda showed photos of German colonists departing in covered wagons and described the lands to the east as the “California of Europe.” German newspapers featured headlines such as “Go East, Young Man!” — an imitation of Horace Greeley’s famous advice to American settlers to seek their fortune in the west. As for resistance by those being conquered, killed and cleared? Hitler compared it to “the struggle in North America against the Red Indians.” After all, he said, “who remembers the Red Indians?”

Of course, Hitler never realized his full vision. As the tide of war turned, and the vast former Soviet lands he planned to colonize slipped from his grasp, the Nazi strategy shifted away from the traditional “eliminationist” methods of settler colonialism based on the American model — mass shootings, terror, expulsion and depopulation by disease and hunger — and toward their own innovation of mechanized murder in the death camps, now targeting almost exclusively Jews.

Having tried his project in a much more densely populated area, over a much shorter timeframe, and during a war he failed to win, Hitler did manage to kill millions, displace millions more and change the demographics of Europe. Yet, his colonization goals never reached more than around a half million settlers in parts of Poland, most of whom were themselves expelled or killed with the war’s end.

In contrast, the United States played a much longer game — a gradual but relentless expansion and depopulation of Natives over wider spaces and more decades, and without rival military powers seriously threatening the project. Like Hitler, the United States killed and displaced millions and changed the demographics of a continent. Unlike the Nazis, the country largely completed the process of racial replacement and continental dominance, while at the same time creating a powerful national myth of frontier heroism and progress. It is a myth Americans are still struggling to come to terms with, and the work of those who spread observations of Indigenous Peoples’ Day is an important part of this task.