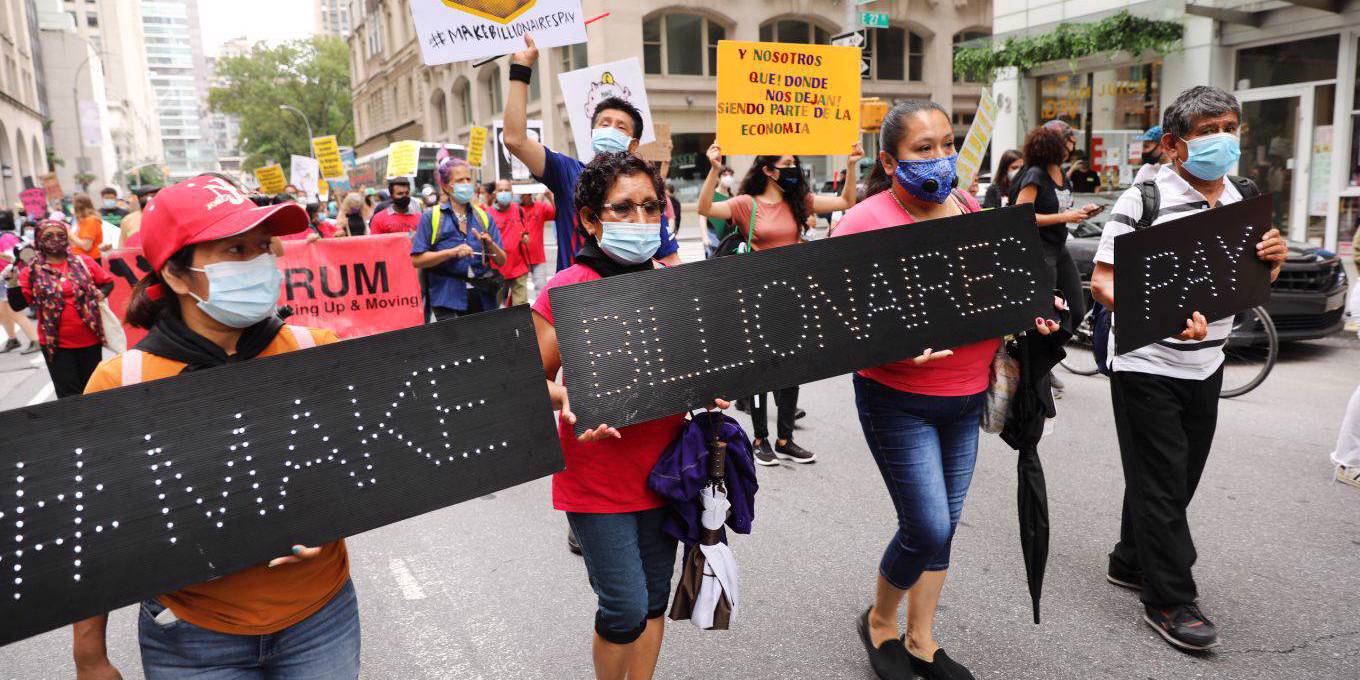 There are numerous theories for why the US economy has continued to benefit the few at the expense of the many, and because these explanations are not mutually exclusive, it helps to consider them all. Fortunately, a new book by a leading light of macroeconomics does precisely that.

Cambridge – As the neoliberal epoch draws to a close, two statistical facts stand out. There has been a continuing increase in income and wealth inequality since 1980, especially in the United States; and there has been a marked slowdown in productivity growth across the developed world since 2000.

The first observation has motivated extensive academic work, with national income accounting being expanded to include explicit measures of the distribution of income. The fruits of these efforts are beginning to emerge in the economics literature.

The second observation has been studied by numerous scholars offering a range of explanations, not all of which are mutually exclusive. Some point to the problem of mismeasurement: owing to the widespread adoption of digital technology, the boundary of what national income accounts measure has shifted to exclude work previously captured by GDP. Others emphasize the slow pace of diffusion of the new technologies, which allows the “best” to pull far ahead of the “rest,” who are hampered by the incumbents’ power to limit access to innovation.

Moreover, because investment is increasingly concentrated in intangible assets that reduce marginal costs for the dominant players, a “superstar” firm’s extraordinary productivity increasingly freezes out competition and confers a near-insurmountable lead in the market. And, following the effective suspension of US antitrust enforcement since the 1980s, there has been increased concentration across all industries. Finally, workers’ bargaining power in labor markets has declined once again, especially in the US, with the virtual elimination of trade unions in the private sector.

Now, in a powerful work of synthesis, economist Lance Taylor, assisted by Özlem Ömer of Nevsehir Haci Bektas Veli University in Turkey, has brought a new perspective to the discussion. Taylor is a rare figure among economists nowadays. Previously a professor at two of the established citadels of mainstream economics, Harvard University and MIT, he has spent the past generation at the New School for Social Research in New York City, and is deeply engaged with the Institute for New Economic Thinking. (I am an INET co-founder and first met Taylor in 1993 as a member of the Visiting Committee of the Graduate Faculty of the New School.)

Taylor has full command over the toolkit of modern economics, and he has chosen to deploy those tools to advance an explicitly progressive agenda. In Macroeconomic Inequality from Reagan to Trump, he has augmented the conventional approach to economic analysis with two neglected instruments that help to uncover the real workings of the modern monetary production economy. In doing so, he provides original and compelling insights into all the phenomena considered by those seeking to explain what happened to productivity.

In recent years, economics has had to reckon with a growing body of research on industrial concentration, increased profit margins, the fall in labor’s share of income, and the now-established decline in the real risk-free rate of interest. Taylor’s first contribution is to go beyond measuring income and wealth distribution in order to determine the consequences of rising inequality for economic growth.

It has long been recognized (and statistically confirmed) that the rich save more than the poor. In fact, the lowest 10% of the distribution comprises “negative savers” who depend on state-engineered transfers. The reason is obvious: The rich can afford to save and invest, whereas those who struggle to maintain a subsistence standard of living necessarily must spend everything they get. The top 1%, who receive about 18% of aggregate household income before capital gains (of which they receive a disproportionate share), save almost 50% of their total income; the returns increase inequality further.

This reflects the famous observation of the Paris School of Economics’ Thomas Piketty about inequality: r>g. Inequality increases when the rate of return on investment over time is greater than the rate of economic growth. Adding to this insight, Taylor points out that as more income (including capital gains and dividends) goes to the top of the income distribution, the growth rate of effective demand falls, such that an increase in r actually reduces g.

Taylor brings distributional dynamics to the core of the Keynesian understanding of how national income is determined. Whatever the savings decisions across the economy, aggregate income will be determined by the magnitude of the offsets to savings in the forms of business investment, government expenditures net of taxation, and exports net of imports.

It is important to note that these offsets are generated by decisions made independent of the decision to save. With no mechanism to operationalize Say’s Law (whereby supply is asserted to create demand), savings do not automatically offset themselves by being translated into investment. And because increased inequality will increase the volume of savings that need to be offset, economic growth will suffer unless there are new initiatives to increase effective demand.

Dynamism, Then and Now

Here, Taylor’s innovation follows in the faint footsteps of the Nobel laureate economist Paul Samuelson, the subject of a recent biography by Roger E. Backhouse, the first volume of which appeared at the same time as Macroeconomic Inequality from Reagan to Trump. During World War II, the young Samuelson was commissioned to the US National Resources Planning Board and tasked with analyzing (as early as 1942) the economic possibilities for the post-war world. Having been deeply influenced by Harvard’s Alvin Hansen, Samuelson set out to determine whether the end of total-war production would return the economy to Depression-era levels of effective demand. He composed a memorandum, “Consumer Demand at Full Production,” explicitly addressing how policies to reduce poverty and even out the distribution of income would increase effective demand and thereby contribute to full employment.

Taylor has similar concerns. But in his synthesis of macroeconomic dynamics, he does not stop with bringing distributional issues to bear on aggregate demand and economic growth. Rather, he also summons up the “structural economic dynamics” of Luigi Pasinetti, a post-Keynesian economist long affiliated with the University of Cambridge. (Pasinetti’s Cambridge sponsor was Richard Kahn, John Maynard Keynes’s top student, the author of the multiplier principle in economics, and my own doctoral supervisor.)

Pasinetti defined how an economy evolves through the differential expansion and contraction of its various sectors, according to their distinctive rates of productivity growth on the supply side and elasticities with respect to price and income on the demand side. He thus transcended the static snapshot represented by economist Wassily Leontief’s input-output tables, then the standard at the time. But this was 50 years ago, when the dynamic of the sectoral pattern over time could only be conceptualized, not operationalized quantitatively. Now, we have the data and the computational power needed to animate Pasinetti’s dynamics, and that is precisely what Taylor and Ömer have been doing.

Drawing on the seminal insights of Nobel laureate economist Arthur Lewis, Taylor and Ömer examine the US economy as a set of “dynamic” sectors set against a “stagnant zone.” Among other things, they find that “faster productivity growth in the dynamic sector forces workers to move to the stagnant zone in which firms adjust by using more workers to produce the same real output.”

Ironically, Lewis had applied himself fully to understanding a developing economy as comprising two sectors that maintain a consistent relationship over time. In his model, the expansion of a high-growth, dynamic “modern sector” siphons labor away from the stagnant “traditional” sector, which is characterized by very low – even negative – marginal productivity.

Yet, following the economic historian Peter Temin, Taylor and Ömer point to the emergence in the US of an “inverse Lewis economy,” in which a growing share of the labor force is relegated to the low-growth, low-productivity, low-wage sector of the economy. In doing so, they produce an analysis making the case that increased inequality and reduced productivity growth are effectively integrated.

A Long Way Back

The book’s last major contribution lies in its explanation of the root cause of today’s structural inequality. “[W]age repression over decades is the basic cause of distributional malaise,” Taylor and Ömer write. “‘Big Data’ microeconomic detail is consistent with this finding but does not determine it – not monopoly power, not ‘superstar’ firms.” For a summary of the institutional forces at work over almost two generations, they quote the Nobel laureate economist Robert Solow (Samuelson’s longtime professional partner at MIT):

“… the decay of unions and collective bargaining, the explicit hardening of business attitudes, the popularity of right-to-work laws, and the fact that the wage lag seems to have begun at about the same time as the Reagan presidency all point in the same direction: the share of wages in national value added may have fallen because the social bargaining power of labor has diminished.”

Taylor and Ömer end with a simulation model, drawing on the data they have marshaled, with the goal of sketching a path back from the stagnant, static state of the American political economy to one that would be both more inclusive and more dynamic. The upshot is that it will take decades of real (inflation-adjusted) wages growing significantly faster than productivity to reduce US income and wealth inequalities in any substantial way.

Public policy initiatives can help, especially as AI-driven automation impacts the economy, albeit more slowly than widely feared. A recent report by the MIT Task Force on the Work of the Future provides a toolkit with relevant policy initiatives.

Most immediately, the US needs more progressive schedules of income and capital gains taxes, as well as stronger tax enforcement. It also needs innovations in labor-market regulation, from raising the minimum wage to ensuring a greater place for collective bargaining, including in the “gig economy.” Expanding government-underwritten health insurance and extending unemployment insurance to excluded and part-time occupations can also help, as would increased provision of free or substantially subsidized college tuition.

The overriding message from Taylor’s work is the exact opposite of “trickle-down economics.” Reducing inequality will increase economic growth and productivity. But, at the end of the day, there is no magic bullet to reverse the impact of the structural transformation of the past 50 years. That, too, was driven by policy initiatives, the full implications of which many policymakers are only just now beginning to comprehend.