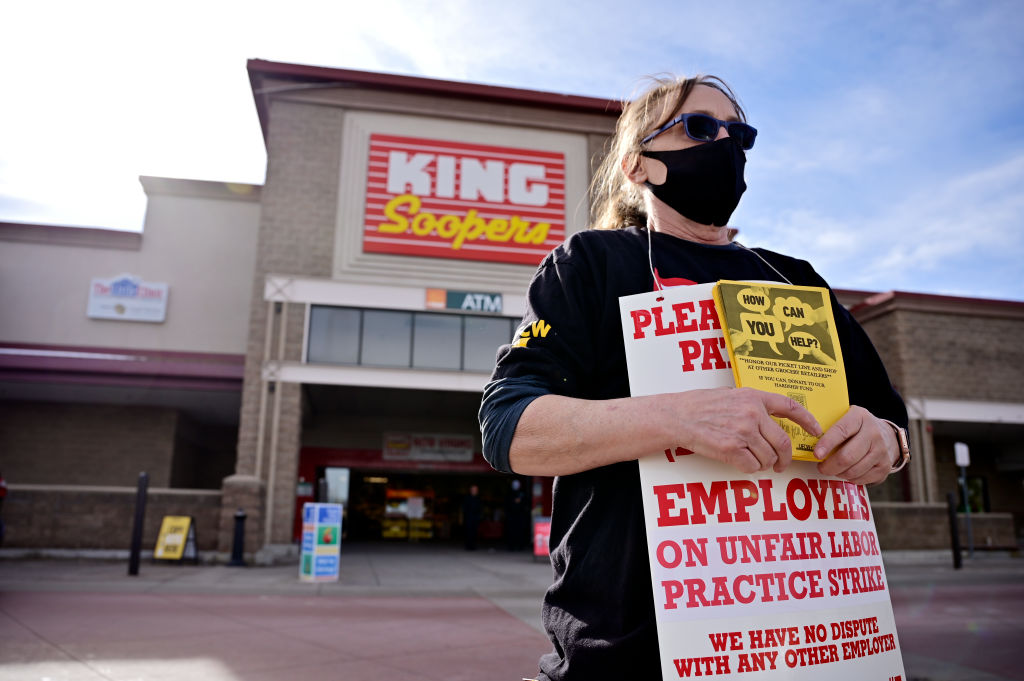 Workers at the Kroger-owned supermarket chain King Soopers were recently on strike — a public relations nightmare.

The solution? Enlist Beltway spin doctors to talk about how wonderfully the company treats its employees, actually.

In recent weeks, Kroger has faced a rash of negative news reports about its employees’ working and living conditions, drawn new scrutiny from lawmakers, and seen thousands of workers go on strike in Colorado — all as the company lobbies on union rights legislation, and bankrolls corporate trade associations trying to kill it.

Now amid the potential for congressional hearings and a federal crackdown, the grocery giant did what so many other corporate behemoths do when they’re feeling the heat: pay big bucks to run counter programming claiming it offers “great pay and great benefits” in a Beltway tip sheet read by Washington insiders.

The DC tip sheet industry, which includes daily email newsletters like Politico Playbook, Axios AM, and Punchbowl News, may seem obscure, but it serves a special purpose in media. The newsletters are the first thing anyone who’s anyone in Washington reads every morning. Their tidbits and scoops help populate cable news shows with gossipy, insidery content that drives the day’s coverage, and their journalists are often brought on TV to contextualize the news for viewers.

Because of their place in the DC ecosystem, the tip sheets also serve a more insidious purpose: they have become a reliable avenue for corporate interests to inject their money and viewpoints straight into the political conversation.

Kroger’s current weapon of choice: Punchbowl News, a newsletter start-up that quickly built a $10 million fortune last year primarily off of corporate advertising. Punchbowl journalists have become staples on cable news shows, presenting heady, source-driven analysis to MSNBC viewers, while their newsletter churns out a steady stream of scoops framing the political conversation the way that corporate lobbyists want it to be spun.

Punchbowl’s website sells sponsors on having a who’s who of readers. “Punchbowl News’ audience is from every corner of Washington, D.C., from the White House to the Capitol,” says its sponsorship page. “Lobbyists, journalists, policy and private sector professionals, and state government officials across the country engage with Punchbowl News.”

Key to Punchbowl’s business model, like the rest of the Beltway tip sheet industry, is allowing corporations and powerful lobbying groups to tell apparently any self-serving lie or spin they want, and pretending that’s all fine and normal. Hence, Kroger — the country’s largest supermarket chain, and fifth largest retailer in the world — has been permitted this week to use the Punchbowl homepage to share a highly questionable message about how well the company treats its workers.

“Kroger invests in associates through great pay and great benefits,” the ad reads. “Kroger empowers associates and helps them find a sense of belonging. At Kroger, you can come for a job and find a career.” 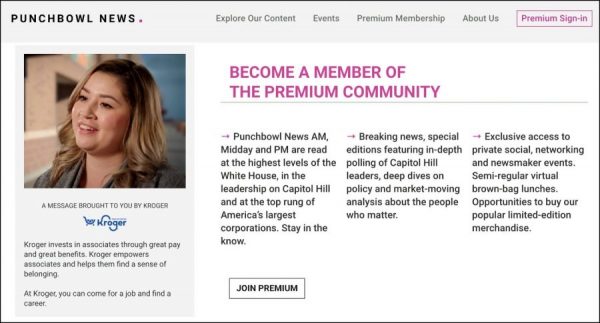 In reality, a recent survey of nearly thirty-seven thousand Kroger workers found that 78 percent are food insecure, 63 percent can’t afford their basic expenses, and 14 percent have recently or are currently experiencing homelessness. A confidential memo obtained by More Perfect Union found that Kroger executives were informed in 2018 that “most employees are considered to be living in poverty and need state aid, as in food stamps, free school lunch, etc. just to get by.”

The Punchbowl ad directed readers to Kroger’s career page, where the company talks about how it “invested $450 million to increase wages” last year.

The webpage includes a 30-second video in which one worker says that “Kroger is a wonderful company because it does invest in its associates.” Another says that the company offers “great pay, great benefits.”

Of course, there is no mention on the webpage of how early in the COVID-19 pandemic, Kroger quickly rescinded the $2-an-hour “hero bonus” it briefly offered to its grocery and warehouse workers as hazard pay to keep them on the front lines. Nor is there mention of the recently surfaced memo showing Kroger executives are well aware that they are immiserating their employees while raking in big profits.

The company also brags on the webpage about offering $100 payments to workers who are fully vaccinated against COVID. Left unsaid? How the company decided to actively punish employees who aren’t vaccinated — eliminating their paid emergency leave and making them pay $50 more per month for health insurance.

Need more proof that Kroger isn’t doing all it can do to “invest in associates through great pay and great benefits”? How about this: more than eight thousand Kroger workers at King Soopers stores in Colorado recently went on a ten-day strike to demand better pay and pandemic protections, as well as to protect their health care benefits, which the company had been trying to cut.

It was the country’s second largest strike in the past two years. While the walkout recently ended after management agreed to pay some workers up to nearly $6 more per hour and cover additional employee health care costs, along the way the grocery chain was accused of “bullying tactics,” such as obtaining a restraining order against its own workers so that none of the picket lines would have more than ten employees at a time.

Thousands more Kroger workers at Smith’s stores in New Mexico could soon go on strike, too.

But you won’t find any mention of employee protests or troubling working conditions in Kroger’s sponsorship message in Punchbowl News — which is exactly the point.

The journalists in the tip sheet industry may assure themselves that all this corporate cash filling their pockets isn’t really influencing their work at all — it’s just advertising, right?

But taking money from a company whose workers are starving, and allowing them to use your website to say those workers receive “great pay and great benefits,” is a choice — one that media outlets should never make.