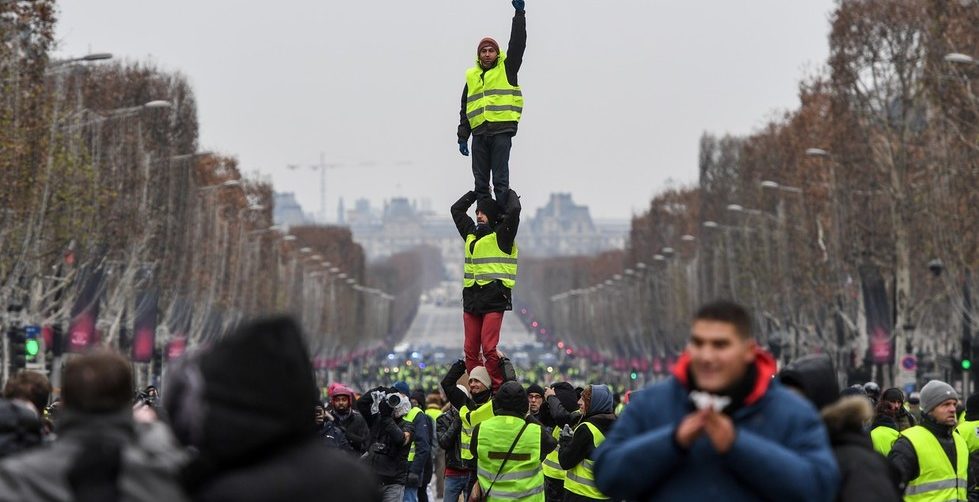 How Mao Would Have Evaluated The Yellow Vests

The French Yellow Vest movement exposes a problem at the heart of today’s politics. Too much adherence to popular “opinion” and not enough innovation and fresh ideas.

Already a quick glance at the imbroglio makes it clear that we are caught in multiple social struggles. The tension between the liberal establishment and the new populism, the ecological struggle, efforts in support of feminism and sexual liberation, plus ethnic and religious battles and the desire for universal human rights. Not to mention, trying to resist digital control of our lives.

So, how to bring all these struggles together without simply privileging one of them as the “true” priority? Because this balance provides the key to all other struggles.

Half a century ago, when the Maoist wave was at its strongest, Mao Zedong’s distinction between “principal” and “secondary” contradictions (from his treatise “On Contradiction,” written in 1937) was a common currency in political debates. Perhaps, this distinction deserves to be brought back to life.

Let’s begin with a simple example: Macedonia – what’s in a name? A couple of months ago, the governments of Macedonia and Greece concluded an agreement on how to resolve the problem of the name “Macedonia.” It should change its name into “Northern Macedonia.”

This solution was instantly attacked by the radicals in both countries. Greek opponents insisted “Macedonia” is an old Greek name, and Macedonian opponents felt humiliated by being reduced to a “Northern” province since they are the only people who call themselves “Macedonians.”

Imperfect as it was, the solution offered a glimpse of hope to end a long and meaningless struggle with a reasonable compromise.

But it was caught in another “contradiction” – the struggle between big powers (the US and EU on the one side, Russia on the other side). The West put pressure on both sides to accept the compromise so that Macedonia could quickly join the EU and NATO, while, for exactly the same reason (seeing in it the danger of its loss of influence in the Balkans), Russia opposed it, supporting conservative nationalist forces in both countries, to varying degrees.

So, which side should we take here? I think we should decidedly take the side of compromise, for the simple reason that it is the only realist solution to the problem. Russia opposed it simply because of its geopolitical interests, without offering another solution, so supporting Russia here would have meant sacrificing the reasonable solution of the singular problem of Macedonian and Greek relations to international geopolitical interests.

Now let’s take the arrest of Meng Wanzhou, Huawei’s chief financial officer and daughter of the firm’s founder, in Vancouver. She is accused of breaking US sanctions on Iran, and faces extradition to the US, where she could be jailed for up to 30 years if found guilty.

What is true here? In all probability, one way or another, all big corporations discreetly break the laws. But it’s more than evident that this is just a “secondary contradiction” and that another battle is being fought here. It’s not about trade with Iran, it’s about the big struggle for domination in the production of digital hardware and software.

What Huawei symbolizes is a China which is no longer the Foxconn China, the place of half-slave labor assembling machines developed elsewhere, but a place where software and hardware is also conceived. China has the potential to become a much stronger agent in the digital market than Japan with Sony or South Korea with Samsung, through economic heft and numbers.

But enough of particular examples. Things get more complex with the struggle for universal human rights. We get here the “contradiction” between proponents of these rights and those who warn that, in their standard version, universal human rights are not truly universal but implicitly privilege Western values (individuals have primacy over collectives, etc.) and are thereby a form of ideological neocolonialism. No wonder that the reference to human rights served as a justification of many military interventions, from Iraq to Libya.

Partisans of universal human rights counter that their rejection often serves to justify local forms of authoritarian rule and repression as elements of a particular way of life. But how to decide here?

When the standard Western ideas are criticized for a particular bias, this critique itself has to refer to some notion of more authentic universality which makes us see the distortion of a false universality.

But some form of universality is always here, even a modest vision of the coexistence of different and ultimately incompatible ways of life has to rely on it. In short, what this means is that the “principal contradiction” is not that of the tension(s) between different ways of life but the “contradiction” within each way of life (“culture,” organization of its jouissance) between its particularity and its universal claim.

To use a technical term, each particular way of life is by definition caught in “pragmatic contradiction,” its claim to validity is undermined not by the presence of other ways of life but by its own inconsistency.

Things get even more complex with the “contradiction” between the alt-right descent into racist/sexist vulgarity and the politically correct stiff regulatory moralism.

Thus, it is crucial, from the standpoint of the progressive struggle for emancipation, not to accept this “contradiction” as primary but to unravel in it the displaced and distorted echoes of class struggle.

In a fascist way, the rightist populist figure of the enemy (the combination of financial elites and invading immigrants) combines both extremes of the social hierarchy, thereby blurring the class struggle.

On the opposite end and in an almost symmetrical way, the politically-correct anti-racism and anti-sexism struggles barely conceal that their ultimate target is white working class racism and sexism, thereby also neutralizing class struggle.

That’s why the designation of political correctness as “cultural Marxism” is false. Political correctness in all its pseudo-radicality is, on the contrary, the last defense of “bourgeois” liberalism against Marxism, obfuscating/displacing class struggle as the “principal contradiction.”

The same goes for the transgender and #MeToo struggle. It is also overdetermined by the “principal contradiction” of the class struggle which introduces an antagonism into its very heart.

Tarana Burke, who created the #MeToo campaign more than a decade ago, observed in a recent critical note that in the years since the movement began, it deployed an unwavering obsession with the perpetrators — a cyclical circus of accusations, culpability, and indiscretions.

“We are working diligently so that the popular narrative about MeToo shifts from what it is,” Burke said.

“We have to shift the narrative that it’s a gender war, that it’s anti-male, that it’s men against women, that it’s only for a certain type of person — that it’s for white, cisgender, heterosexual, famous women.“

In short, one should struggle to refocus #MeToo onto the daily suffering of millions of ordinary working women and housewives. This emphatically can be done. For example, in South Korea, #MeToo exploded with tens of thousands of ordinary women demonstrating against their sexual exploitation.

The ongoing Yellow Vests (gilets jaunes) protests in France condense all we were talking about. Their fatal limitation resides precisely in their much-praised “leaderless” character, their chaotic self-organization.

In a typical populist way, the Yellow Vest movement bombards the state with a series of demands which are inconsistent and impossible to meet within the existing economic system. What it lacks is a leader who would not only listen to the people but translate their protest into a new, coherent vision of society.

The “contradiction” between the demands of the Yellow Vests and the state is “secondary”: their demands are rooted in the existing system. The true “contradiction” is between our entire socio-political system and (the vision of) a new society in which the demands formulated by the protesters no longer arise. How?

The old Henry Ford was right when he remarked that, when he offered the first serially produced car, he didn’t follow what people wanted. As he put it succinctly, if asked what they want, the people would have answer: “A better and stronger horse to pull our carriage!”

This insight finds an echo in Steve Jobs’ infamous motto that “a lot of times, people don’t know what they want until you show it to them.”

In spite of all one has to criticize in the activity of Jobs, he was close to an authentic master in how he understood his motto. When he was asked how much customer feedback Apple uses, he snapped back: “It’s not the customers’ job to know what they want… we figure out what we want.”

Note the surprising turn of this argumentation. After denying that customers know what they want, Jobs doesn’t go on with the expected direct reversal “it is our task (the task of creative capitalists) to figure out what customers want and then ‘show it to them’ on the market.”

Instead, he continues “we figure out what we want” – this is how a true master works. He doesn’t try to guess what people want. He simply obeys his own desire so that it is left to the people to decide if they will follow him.

In other words, his power stems from his fidelity to his vision, from not compromising it.

And the same goes for a political leader that is needed today. Protesters in France want a better (stronger and cheaper) horse – in this case, ironically, cheaper fuel for their cars.