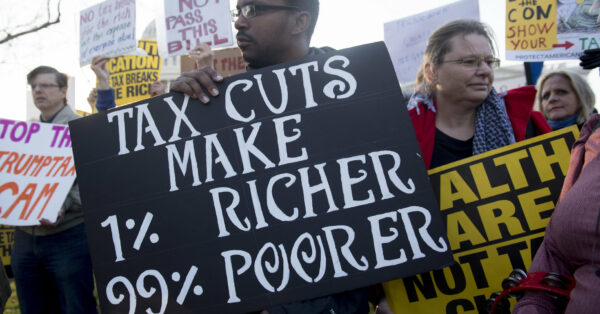 How Momentum Is Growing To Tax The Rich And Reduce Inequality

In the middle of the last century, there was a large and secure working class. Then, changes to the tax structure distributed more and more of the wealth to the richest and hollowed out the middle class. Now, levels of inequality in the United States are unsustainable as the top one-tenth of one percent (0.1%) has wealth equal to the bottom 80%. Momentum is growing to make the tax system more fair at both the state and federal levels. We speak with Sam Pizzigati about the history of taxes and what policies are currently being proposed.

Sam Pizzigati is a veteran labor journalist and Institute for Policy Studies associate fellow who co-edits Inequality.org, the Institute’s weekly newsletter on our great divides. He also contributes a regular column to OtherWords, the IPS national nonprofit editorial service.

Sam, now retired from the labor movement, spent two decades directing the publishing program at America’s largest union, the 2.8-million-member National Education Association, and before that edited the national publications of three other U.S. trade unions.

Sam’s own writing has revolved around economic inequality since the early 1990s. His op-eds on income and wealth concentration have appeared in periodicals all around the world, from the New York Times to Le Monde Diplomatique.

Sam has authored four books and co-edited two others. His 2004 book, Greed and Good: Understanding the Inequality that Limits Our Lives, won an “outstanding title” honor from the American Library Association’s book review journal. His 2012 title, The Rich Don’t Always Win: The Forgotten Triumph over Plutocracy that Created the American Middle Class, 1900-1970, explores how average Americans ended the nation’s original Gilded Age. Sam’s most recent book, The Case for a Maximum Wage, offers a politically plausible path toward ending that Gilded Age’s second coming.