How Much Damage are Trump’s Solar Tariffs Doing to the U.S. Industry?

By Dan Gearino, Insideclimatenews.org
August 21, 2018
| Educate!
How Much Damage are Trump’s Solar Tariffs Doing to the U.S. Industry?2018-08-212018-08-21https://popularresistance-uploads.s3.amazonaws.com/uploads/2017/12/popres-shorter.pngPopularResistance.Orghttps://popularresistance-uploads.s3.amazonaws.com/uploads/2018/08/solar-installer-colorado_john-moore-getty-1.jpg200px200px

Above Photo: Despite the tariffs, U.S. solar added 2.5 gigawatts of capacity in the first quarter of 2018, up 13 percent from a year earlier, according to the Solar Energy Industries Association. Credit: John Moore/Getty Images

It’s been six months, and while the tariffs are having an impact on jobs and companies, the U.S. solar market is still hot.

The tariffs on imported solar panels imposed by the Trump administration six months ago have done little to dampen the booming solar market in the United States.

Company executives and industry analysts say that the effects of the tariffs—increased prices for installations that could depress demand for solar projects and lead to thousands of job losses—have largely been cancelled out by other factors.

Many developers had stockpiled cheap panels in anticipation of the import fees. China slowed the pace of domestic installations, creating a surplus of cheap panels that could spill into global markets. And U.S. consumers have a big incentive to install solar panels in the next 18 months, before U.S. tax incentives begin to phase out.

So far, there’s not enough data to tell how much the import fees are altering project costs, although it is clear that there has not been a dramatic shift.

“We’re really talking about small changes to a general trend,” said Colin Smith, a solar analyst for Wood Mackenzie Power & Renewables. That general trend is the rapid growth of solar.

A few companies responded to the tariffs this winter and spring by announcing plans to open or expand plants in the United States, in part to reduce exposure to the charges. Any advantage to doing that will likely be short-lived, however, because the tariffs, which started at 30 percent, go down each year before a complete phaseout after four years.

Panel buyers are now saying that the effects on prices appear to be brief and minor. Bob Komin, chief financial officer for the rooftop solar company SunRun, said in an Aug. 9 conference call that equipment prices are falling back to where they were last year before the run-up in anticipation of the tariffs.

“Generally speaking, I think any price increase arising from tariffs ought to be temporary,” he said, noting that the major suppliers have factories in several countries and can adjust their production to respond to tariffs.

The What and Why of the Tariffs

President Trump signed an order to impose the tariffs in January, with an effective date of Feb. 7. It covers crystalline-silicon solar products, the most common material used in solar panels.

The action followed a complaint filed last year by Suniva and supported by SolarWorld, two of a small number of companies that make panels in this country. They asked for protection because foreign governments were subsidizing their industries and flooding the market with low-cost products.

The complaints about low-cost solar imports have been around for years, and the administration’s action was an early signal of an aggressive trade policy that has gathered momentum ever since.

Trump’s escalation of a trade war with China has included additional tariffs on other products, and the effects on the American solar industry could well be influenced by the outcome of broader talks.

The State of the Market

For now, the U.S. solar market is going strong.

It added 2.5 gigawatts of solar capacity in the first quarter of 2018, an increase of 13 percent from a year earlier, according to a June report from the Solar Energy Industries Association.

The growth is helped by strong demand from corporations signing contracts to purchase renewable energy as part of pledges to get more of their electricity from clean sources.

Compared to the industry’s initial fears, “the tariffs have had less of an impact, and that is a good thing,” said Amanda Levin, a policy analyst for the Natural Resources Defense Council. 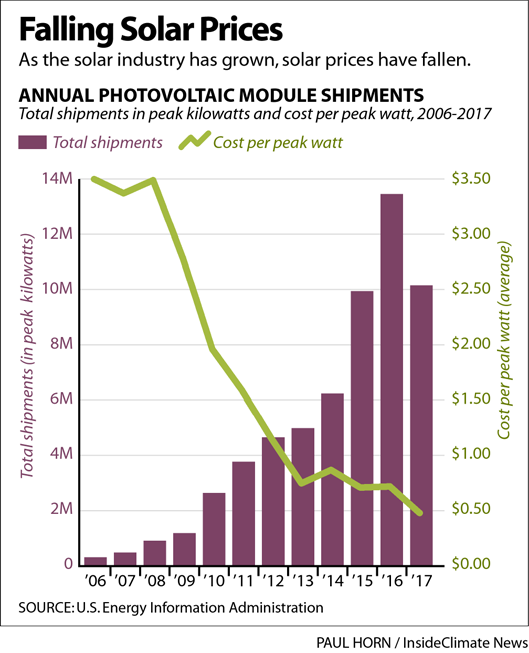 But there have been job losses, according to Dan Whitten, spokesman for the Solar Energy Industries Association (SEIA). Although he said the latest data is “less bad than it could have been.”

SEIA says that 9,000 jobs have been affected so far this year because of the tariffs, a figure based largely on information that companies have provided confidentially. The tally includes both layoffs and prospective jobs that were unfilled.

The group had warned in January that tariff-related job losses could reach about 23,000 for the year.

But solar construction activity is likely to remain brisk as long as prices continue to go down.

Wood Mackenzie estimates that second-quarter U.S. prices for solar modules were 40 cents per watt, the second consecutive quarter of decreases. Those prices, which are for modules used in utility-scale projects, are falling after a small increase in 2017. Developers who were anticipating the tariffs bid up the prices last year as they built up stockpiles.

The long-term price trend is even clearer. Modules were selling for more than $1 per watt as recently as 2012, and the steady decrease since then helped to accelerate the growth in solar installations, as did the temporary extension of a 30 percent federal tax credit.

Manufacturers have made adjustments that appear to be at least partially tied to the trade dispute, including opening or expanding U.S. factories.

Chinese-owned JinkoSolar is opening a plant in the Jacksonville, Florida, area before the end of this year. The company, one of the world’s leading panel makers, said in a March conference call that its strategy is to help customers avoid some of the uncertainty caused by fluctuations in the market, some of which is due to tariffs.

LG Electronics, based in South Korea, said in June that it is expanding an existing plant in Huntsville, Alabama.

Another example is SunPower, which is expanding in the U.S. through the acquisition of SolarWorld, the struggling manufacturer that had filed the trade complaint and has a plant in Oregon. SunPower is based in California but does much of its manufacturing outside the country. While these plans take shape, SunPower is paying the tariffs on equipment it imports.

One of the challenges in assessing the tariffs’ effects is that developers are saying almost nothing about whether projects are getting delayed or canceled.

A rare exception was Cypress Creek Renewables, one of the country’s largest installers of utility-scale solar, which said in May that it had canceled 1.5 gigawatts of projects because of the tariffs, which was about 20 percent of the company’s project pipeline.

The disclosure was part of a push in Congress to create an exception to the tariffs for common utility-scale panels. That bill has not passed. Cypress Creek did not respond to requests for comment.

Most of the disruption is being felt by companies involved with utility-scale projects, the large solar farms for which panel prices are a crucial variable.

Companies that specialize in rooftop solar are less affected because they get much of their income from services such as installation and have a greater ability to absorb changes in parts prices.

Sunrun, the country’s leader in rooftop solar sales, reported this month that it had installed 91 megawatts of solar in the second quarter, up 20 percent from the prior year. It also was a record for the company, although record-breaking performances have become routine in the fast-growing solar industry.

NRDC’s Levin says it is important to note that the solar market would almost certainly be growing even more rapidly if the Trump administration had not intervened. That growth would have been good for the U.S. economy and environment, making solar more competitive with fossil fuels.