Take action visit the BattleForTheNet.com “scoreboard” — a new tool that makes it easy to find out where your reps stand on net neutrality. Click here to find out if your representative supports net neutrality, and learn what you can do to help out.   KZ

The House of Representatives is sitting on its hands instead of calling a vote to protect net neutrality. But those same members of Congress have had their hands in the pot of the anti-net neutrality telecommunications industry for years.

The net neutrality advocacy project BattleForTheNet.com on Monday released an updated interactive scorecard that compares where members of congress stand on a proposed net neutrality protection resolution with how much money they’ve taken from companies like AT&T and Comcast. BattleForTheNet.com is a joint initiative of progressive organizations Fight for the Future, Demand Progress, and Free Press Action Fund.

“There’s hardly a better example of classic corruption in Washington than members of congress voting against net neutrality when polls show that constituents overwhelmingly support it,” Evan Greer, director of the internet advocacy organization Fight for the Future, told Mashable. “It’s really important for voters to know where their representatives stand, but it’s equally important to know why.” 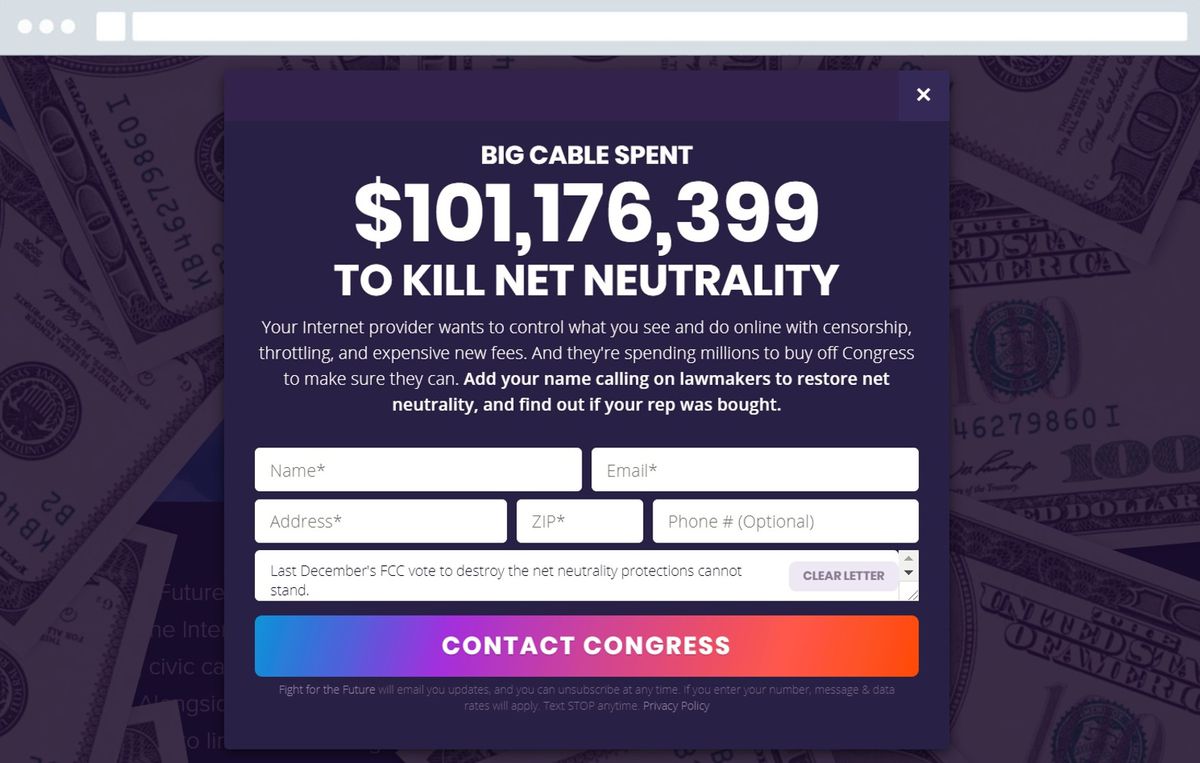 “That $100 million that companies have given are the only reason members of congress wouldn’t want to support this,” Evan Greer said. IMAGE: BATTLEFORTHENET.COM

In May, the Senate passed a resolution to protect Obama-era net neutrality, undoing the repeal of those protections by the Trump administration’s FCC. The legislation came via the Congressional Review Act (CRA), which is a statute that allows Congress to “revisit — and reject,” rulings by government agencies within a certain window of time, according to the Washington Post.

Now, members of the House of Representatives want to bring the resolution to a vote. But even with the support of every Democrat and one Republican in the House, it still falls short of the 218 signatures required to force a vote.

The House has until the end of the year to vote on the CRA, according to the office of Congressman Mike Doyle, who is the author of the petition.

That’s where BattleForTheNet comes in. The organization released its updated scorecard to show where every member of Congress stands on the CRA. You can search by zip code for your specific representative, and see whether they’ve lent their support to the resolution, or not. 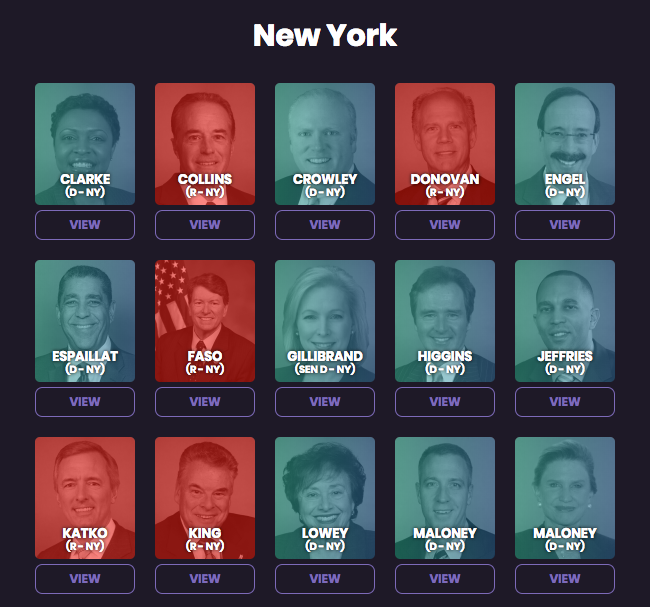 On net neutrality, Members of Congress from New York are split along party lines.
IMAGE: BATTLEFORTHENET.COM

For those against the CRA, the scorecard shows how much money they’re taking from the telecommunications industry. The campaign contribution numbers are based on a 2017 report from The Verge, with data sourced by the Center for Responsive Politics.

For example, Rep. Greg Walden (R-OR), leads the House of Representatives as the top recipient of donations: he received over $1.6 million between 1989 and 2017. Walden is also the chairman of the Energy and Commerce Committee, and the former chairman of the subcommittee on Communications and Technology. He is against the CRA resolution.

Campaign donations do not necessarily correlate with a representative’s stance on net neutrality, though. The telecoms industry donates to almost every member of congress — including some top advocates for net neutrality, such as Sen. Ed Markey and Rep. Mike Doyle. The scorecard does not show how much supporters of the CRA receive, but you can view the full list via The Verge.

But pairing the campaign donation data with CRA voting intentions is a powerful way to demonstrate how AT&T, Verizon, and Comcast continue to wield influence in Congress, despite consumer preference for strong net neutrality. This interactive tool can help net neutrality advocates draw up a battle plan as the pressure to bring the CRA to a vote bears down on Congress, and on advocates of the free and open internet everywhere.