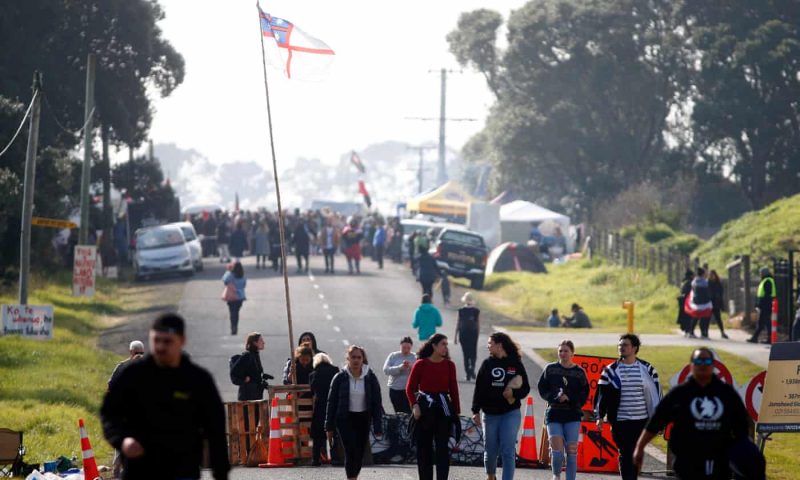 How New Zealand’s Maori Are Reclaiming Land With Occupations

Above Photo: Protestors gather at Ihumātao in July 2019. New Zealand’s Māori are using occupations to reclaim land taken from them by confiscation or inequitable purchases. Phil Walter/Getty Images.

Since 1975, Māori have been able to reclaim land through a tribunal – but its reach is limited and now they are exploring other options.

Two years ago, a small pocket of land three kilometres from Auckland’s international airport became the most prominent site of a struggle by Māori, New Zealand’s indigenous people, to reclaim land confiscated by the crown more than 150 years ago.

Ihumātao contains evidence of New Zealand’s first commercial gardens, where thousands of hectares were planted with kumara, a tropical sweet potato which thrived in the warm and nutritious soil. The adjacent stonefields, today a category one Unesco heritage site, are rich with ancient nurseries and storage pits. When William Hobson, then-governor of New Zealand, founded Auckland in 1840, the produce of Ihumātao sustained the growing population.

But in the 1860s, war broke out between the British crown and a federation of iwi, or tribes, known as the Kingitanga, who were trying to counter the increasingly aggressive land grabs by settlers.

As punishment after their defeat, the crown’s troops forced the local iwi, Te Wai-o-Hua, off the land, which was sold to settlers and turned into a private farm. It would remain so for the next 150 years.

Leading constitutional lawyer Dr Moana Jackson says this confiscation, and others like them, formed the beginnings of the New Zealand banking system and colonial economy.

“Ministers of the crown became mortgage brokers, if you like, and began offering cheap mortgages to colonisers, or giving them a reward for their part in the wars against our people.”

An estimated 8.3m hectares (20.5m acres) of land in the North Island – nearly 73% of the landmass – as well as almost the entire South Island were taken from Māori through confiscation and inequitable purchases between 1840 and 1939.

But occupations – though participants call themselves protectors rather than protesters or occupiers – similar to that in Ihumātao have increasingly cropped up across New Zealand, in Pukeiāhua, Mount Crawford, Waiheke Island and Shelly Bay in Wellington.

As occupations emerge, New Zealand’s government must face complex questions around ownership and redress. At the same time, they are reopening for a new generation of Māori the question of how much of their lost land can be reclaimed.

The land at Ihumātao was bought by developers Fletcher Building, one of the largest companies on New Zealand’s stock exchange, in 2016. The firm planned to build almost 500 houses on the plot – a goldmine in Auckland, where the nation’s housing crisis has seen prices increase to more than 10 times the average annual income. Local Māori were certain they would be priced out, despite Fletcher’s assurances that a number of homes would be reserved.

The value of land to Māori is more than economic. According to Māori cosmogony, the earth is Papatuanuku, the mother. The relationship to Papatuanuku is what makes Māori tangata whenua, or people of the land.

“The whole idea of that relationship with the Earth mother is not some exotic, spiritual thing – it’s actually a very practical thing,” says Jackson. “Without the land, the phrase tangata whenua becomes a poetic expression rather than a statement of belonging.”

Māori constitutional authority traditionally derives from an iwi’s rohe, or sphere of influence. Without land, Māori political authority was substantially neutered. Beginning in the 1970s, widespread campaigns and occupations began pressuring the government to recognise the grievances of Māori who had been dispossessed.

In 1975, Dame Whina Cooper led a march of more than 1,000km from the northern point of New Zealand to the capital Wellington to deliver a petition protesting the ongoing loss of Māori land.

That year, the Treaty of Waitangi Act established the Waitangi Tribunal. Its purpose was to hear claims of the crown’s violation of the treaty, signed in 1840 and considered New Zealand’s founding document. The treaty is one source of New Zealand’s constitutional system, however the document’s Māori translation has been contentious since its inception.

Most Māori believe that sovereignty was never ceded to the crown. The Māori translation, Te Tiriti, granted governorship to the crown, and promised Māori tino rangatiratanga – a term which can be interpreted as absolute sovereignty – over their land, as opposed to the “exclusive and undisturbed possession” granted in the English translation.

Since the tribunal’s establishment, iwi such as Ngāi Tahu in the South Island and Waikato-Tainui in the North Island have negotiated settlements worth hundreds of millions of dollars. But the settlement process is not without criticisms.

“When the crown enters into negotiations over what they call settlements, I think it’s a misnomer,” says Jackson. “They set the terms of the negotiation, they set the parameters, they even have standard statements of apology that iwi are asked to choose from. That whole process flies in the face of what a treaty is meant to be. Treaties aren’t meant to be settled. They’re meant to be honoured.”

The total cost of settlements paid out by the crown since 1975 is less than New Zealand’s annual corrections budget. And because much of the land confiscated by the crown was subsequently privatised, many iwi are left with no recourse beyond a cash payment. The crown, it says, has no jurisdiction. Land like the plot at Ihumātao is not subject to the Tribunal’s authority and, were it developed, one deed would turn into hundreds, further alienating the traditional owners.

If The Crown Has The Will …

With no ability to reclaim the land through the channels of the tribunal, the owners at Ihumātao began an occupation in the tradition of those at Whaingaroa, on the west coast, and Bastion Point in Auckland. Pania Newton, a recent law graduate, moved into a caravan on the site in November 2016, determined to stop the planned development.

“We had been so alienated from the land in the physical sense, and we just felt like we couldn’t trust the authorities,” she says.

In 2019, the situation escalated. The occupants were served with trespass notices and a large police presence moved in. Thousands gathered in solidarity, blocking Fletcher’s equipment from moving on to the land.

For several days there was a tense standoff. MPs from New Zealand’s Green Party, as well as unionists, activists and other indigenous groups from international movements flocked to Ihumātao.

The eventual announcement of a resolution last year was anti-climatic, Newton says. Initially planned for Waitangi Day in February, the government pushed the announcement back until December, before revealing the land would be bought from Fletcher using $30m from the Land for Housing program.

“It was misleading for the government to be pushing for it to be purchased using housing money, when clearly it could be purchased using a heritage fund, or the conservation fund, but they wanted to make it look as though there were still going to be houses on that land.”

In April this year New Zealand’s auditor-general found the deal to be unlawful until validated by an act of parliament. Opposition MPs also raised concerns that the use of the housing fund was inappropriate given that there is no guarantee housing will be built on the land.

Jackson says the government’s solution was typical of the way in which it deals with Māori land rights.

“There have been all sorts of fish hooks in it,” says Jackson. “And in the end, like most of these things, the redress offered to the people at Ihumātao – like the redress that has been offered to other iwi – was defined and confined by the crown, and often went against the wishes of the people that were claiming the land.”

But the resolution at Ihumātao did demonstrate that if the crown has the will, solutions can be found, says Jackson.

“The injustice seemed so obvious and so it became a matter of political management for the crown. And their management was, as usual, expedient and not particularly honourable. But at least they didn’t resile from some obligation to try and work things through.”

While those solutions were not entirely satisfactory, Newton says the success at Ihumātao shows the viability of alternative avenues by which Māori can pursue the reclamation of their land outside the treaty process.

“I feel encouraged and inspired by other movements too that draw on Ihumātao as an example, similar to what is happening on Waiheke, at Kennedy Point, at Mateharehare, and those at Canal Road who have been working tirelessly to protect the rakau.”

And Jackson believes constitutional change is already in motion.

“The crown doesn’t do things unless there is pressure,” says Jackson. “The whole settlement process came about because of pressure from our people, and so in the end I think the movement for change will be unstoppable.”