Stacey Milbern didn’t lose power during the recent blackouts, but if she had, things could have gotten dicey fast.

Milbern, whose East Oakland apartment was just outside PG&E’s public safety power shutoff zone, has muscular dystrophy and uses a ventilator to breathe. For her and other members of the disability community — many of whom depend on electrical devices like ventilators, CPAP machines and wheelchairs — losing power signifies much more than just an inconvenience: It can be life-threatening.

‘We believe this is a life-or-death issue. … People with the least resources are banding together to help one another.’Stacey Milbern

Among the nearly 1 million Northern California households and businesses that went dark during the outage that began Oct. 26 — just one of several PG&E shutoffs in October — more than 35,000 were registered medical baseline customers with health conditions requiring special energy needs, the utility said. In addition to providing discounted rates, the utility is also required by law to individually notify those customers in advance of shutoffs.

In the Bay Area, where about 447,000 customers went dark for at least one night, there were more than 11,500 medical baseline households.

“People aren’t used to thinking about what they need in emergencies,” said Milbern, a disability rights activist whose day job is in human resources.

For her, the multiple power shutoffs in October served as a stark reminder that as these events become more common, people with disabilities can’t simply depend on emergency assistance from PG&E or local government agencies — they need to band together and pool resources.

To that end, Milbern helped form #PowerToLive, a grassroots campaign launched on the fly in the days leading up to the Oct. 26 blackout. Adapted from a mutual aid spreadsheet that had been circulated during the first outage earlier in October, the recent effort includes an online form where people can request or offer assistance. The group also developed an extensive, crowd-sourced survival guide “for folks who need #PowerToLive during a power shutoff,” detailing everything from tips for keeping insulin and other temperature-sensitive medications cool, to a rundown of different kinds of in-home generators and batteries to choose from and the hourly wattage required to power different types of devices. 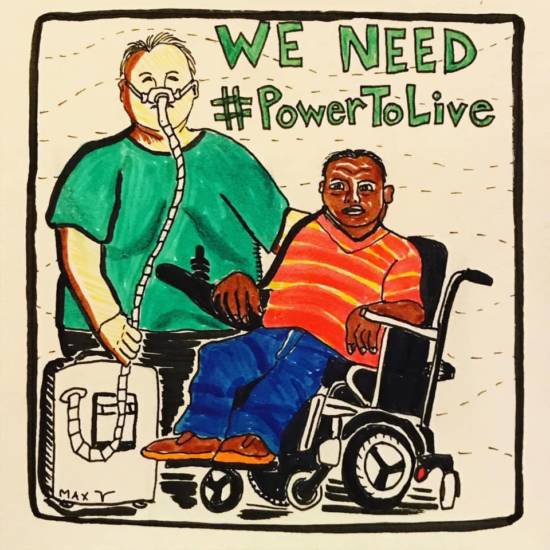 A graphic posted on the group’s social media feeds. (Courtesy of Stacey Milbern)

During the late October round of shutoffs that hit multiple Bay Area communities, including parts of Oakland, Berkeley and Hayward, Milbern and her group of about 20 other volunteers monitored submissions to the online form closely, trying to quickly connect those in need with rides, places to stay and extra cash. In some cases, volunteers even helped residents seal doors and windows and build makeshift box-fan purifiers to keep out smoke from the massive Kincade Fire burning in Sonoma.

In all, the group supported 32 families, mostly from the East Bay, with more than 90 people offering housing or rides, she said. Milbern herself hosted four other people with disabilities in her small but electrified apartment, which served as a impromptu operations base.

“We believe this is a life-or-death issue. We don’t want our people to die or wind up institutionalized,” she said. “People with the least resources are banding together to help one another.”

The local effort comes amid reports of vulnerable Bay Area residents who were largely neglected during the shutoffs, including at least 20 seniors with wheelchairs and walkers who were trapped in the dark for two days in a low-income apartment complex in Novato, and largely left to fend for themselves.

PG&E was widely criticized for how it handled the first round of shutoffs in early October, when its website crashed and scores of customers complained of not receiving sufficient communications or assistance. The company vowed to improve its performance during subsequent outages.

But Milbern said the utility and local public agencies need to do much more to ensure that the most vulnerable residents are accounted for.

“I think just being happy that their website is up is too low a bar. They’re still leaving the burden of costs on disabled people,” said Milbern, noting the hefty expense of high-capacity batteries or generators that many people with disabilities have had to buy to keep their life-saving devices running during the outages. “These are already people with the least amount of resources to front the bill.”

The responsibility shouldn’t just fall on PG&E, she added; If power outages are the new normal, local and state government agencies also need to step up their response.

“They need to have a long-term plan for these scenarios,” she said. “It just seems like disabled people have been forgotten from PG&E’s mind, and the state.”

After the outage, Milbern’s group asked PG&E for a grant of $50,000 to purchase generators and batteries and distribute them to medical baseline customers in the community. The company, she said, was willing to offer only $5,000.

“That’s not enough to purchase two batteries,” she said. “$50,000 is a minuscule amount they could easily make. Their reluctance to do so further demonstrates their lack of accountability and concern for their most vulnerable customers.”

For its part, PG&E said it did everything in its power to reach out to its medical baseline customers before and during the outages, sending a string of automated calls, texts and emails, and knocking on doors of customers who couldn’t be reached otherwise.

“If we need to turn off power for safety, we make every effort to notify baseline customers of the shutoff before it occurs,” said Megan McFarland, a PG&E spokeswoman. “If those customers didn’t get notifications, we want to hear from them.”

The utility, she added, has been working with California Independent Living Centers throughout its vast service area to establish protocols and determine how to best support baseline customers during shutoffs.

“I do not envy [PG&E’s] position,” said Ana Acton, executive director of the FREED Center for Independent Living in Grass Valley, which serves elderly and disability communities in five counties in the Northern California foothills, a region hit hard by last month’s outages. “It’s not an easy place for them to be in. We need comprehensive solutions.”

With funding help from PG&E, Acton’s organization distributed more than $140,000 worth of batteries during the shutoffs and put residents up in hotels. Acton said they’ve been meeting with PG&E officials to establish a comprehensive agreement for handling future shutoff scenarios.

The current arrangement, in which the utility’s only requirement is to notify its baseline customers, is too vague, she added.

“There is more we need to be doing,” Acton said. “People don’t have their resources for backup power and transportation. Communities haven’t caught up, service providers haven’t figured out how to provide oxygen, especially with back-to-back shutoffs.”

Back in Oakland, Milbern’s group is busy preparing for the next blackout. That includes an online fundraising drive, a plan to establish networks of hubs in people’s homes and at satellite locations and creating a map of local resources and support services.

“I figured if 200, 300, 400 disabled people share with us their needs, that’s being organized,” she said. “A lot of activism work is trying to shift people to think about interdependence rather than independence. I believe if you view the needs of the most marginalized people impacted by an issue, then ultimately the entire community benefits.”