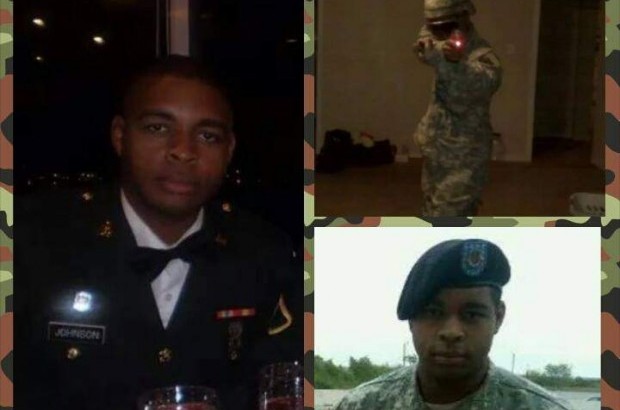 After snipers killed five police officers last night in Dallas, the right wing has rushed to blame Black Lives Matter protesters for the officers’ deaths. That couldn’t be further from the truth.

Both the Dallas Police Department and the Black Lives Matter movement suffered casualties as a result of last night’s shooting. While the media has been reporting the shooting of the officers minute by minute, one underreported story from last night’s chaos is the heroism of Shetamia Taylor, a black mother of four, who survived a gunshot wound to the leg after she threw herself on top of her sons to protect them. Taylor was hit in the calf, and had to immediately undergo surgery. Luckily, she’s expected to make a full recovery. Twitter user @AbraxasSpa also captured a photo of black and white protesters heroically defending a baby stroller with their bodies in the midst of gunfire:

In fact, Black Lives Matter protesters had been working with local police from the early stages of planning the march, and the demonstration was completely peaceful. In one photo, a white police officer and a black police officer are seen posing with a black protester, all of whom are smiling. Additionally, the organizers of Dallas’ Black Lives Matter march issued a public statement, saying the group “does not condone violence against any human being, and we condemn anyone who wants to commit violence.”

As soon as the shooting started, Black Lives Matter protesters helped police by identifying where the shots were coming from. As the video below shows, while police pointed guns at protesters after the initial shots rang out, protesters instead pointed up, attempting to alert officers to the origin of the gunfire before any protesters were harmed.

In addition to the actual shooters, Dallas police initially suggested there was a “person of interest.” That man turned out to be protester Mark Hughes, an open carry advocate who had brought his rifle with him to the protest to demonstrate his Second Amendment rights. Local media tweeted a Facebook Live video of Hughes voluntarily handing his rifle over to police officers after the shooting started, though national media networks still irresponsibly plastered his face on live newscasts, suggesting he was a suspect.

Facebook video of DPD’s original person of interest, handing over his weapon to authorities

Hughes corrected the record on CBS 11 Dallas, though he has still not received an apology from police or national networks. Hughes told reporters he was “laughing and joking with police officers,” and that he immediately flagged down a police officer after receiving a call informing him that he was being identified on national TV as a possible shooter. His lawyers were denied access to him while he was being interrogated at the Dallas Police Department headquarters.

The only shooter who has been publicly identified as of this writing is Micah Xavier Johnson, a 25-year-old U.S. Army veteran who was allegedly upset with both Black Lives Matter protesters and police officers. Johnson has claimed he is unaffiliated with any group, and acted alone. The LA Times reports that Johnson belonged to a gun club, and had “copious” amounts of target practice. Police killed him with a bomb-wielding robot after negotiations broke down.

Given the overwhelming evidence of cooperation with police, and what we currently know about the shooter, blaming Black Lives Matter for the killings of police officers in Dallas is dangerous and irresponsible. As racial justice activist Tim Wise wrote in a viral Facebook status update, blaming one man’s actions on a protest movement encompassing thousands of people is entirely undemocratic.

“To blame BLM for acts like this is to say that protest movements are inherently to blame whenever someone, totally unaffiliated with their cause, decides to do something terrible to those being protested,” Wise wrote. “Such a standard would chill free speech entirely.”