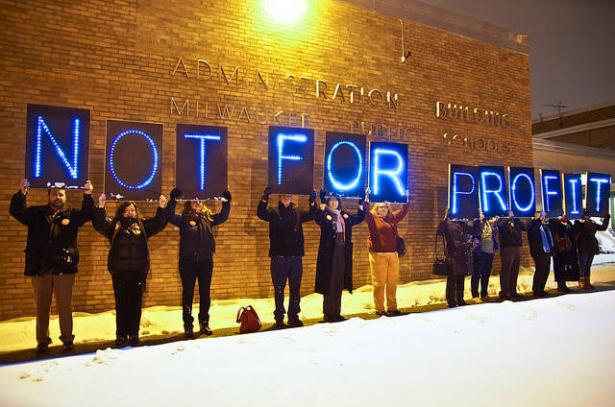 How Public Workers Can Stop The Privatization Of Everything

Above Photo: For decades, work in the public sector has been a gateway to a middle-class life. But that’s changing. Joe Brusky / Flickr.

In the New Book, The Privatization Of Everything, Cohen And Mikaelian, Describe And Debunk The Vast Array Of Privatization Schemes That Now Litter The Landscape.

From Private Prisons And Charter Schools To For-Profit Water Treatment And Trash Collection.

Several years ago, Don Cohen, a former central labor council staffer from San Diego, appeared on a panel discussing the privatization threats faced by union members across the country. He and other speakers were addressing a conference of state, county, and municipal workers represented by the Communications Workers of America (CWA), a group which did not include any federal employees. When Cohen described propaganda campaigns that proponents of privatization conduct to pave the way for out-sourcing local government or state university jobs, audience members immediately recognized that kind of employer behavior and its adverse impact on them. However, when another speaker—a campaigner against privatization of services for veterans–did some quick polling on what CWA activists had heard or read about the Department of Veterans Affairs (VA), their attitude toward that federal agency was largely negative.

With no VA union members present, and only a few veterans or VA patients in the crowd to present an alternative view, the initial consensus of the group was that public provision of veterans’ healthcare was inferior to private sector treatment—a perspective clearly shaped by corporate media coverage of the VA and an ongoing conservative push for its partial privatization. Before the end of the session, participants had a far better understanding of the inter-relatedness of political attacks on public services and jobs, at all levels of government, and the need for greater labor-community solidarity to fend them off. As Cohen and his co-author Allen Mikaelian make clear in “The Privatization of Everything: How The Plunder of Public Goods Transformed America and How We Can Fight Back,” (New Press), any private sector incursion into the public sector is not just somebody else’s problem, it’s an injury to all.

In their new book, Cohen and Mikaelian, describe and debunk the vast array of privatization schemes that now litter the landscape, from private prisons and charter schools to for-profit water treatment and trash collection. “Corporations entrusted with public goods have been given the power to lock people up, force them into a parallel justice system, deny them life-saving treatments, place vital information behind paywalls, divert money from poverty programs to wealthy investors, tie the hands of governments, and undermine our constitutional rights.” There are now 2.6 times as many federal contract employees as there are direct employees of federal agencies.

As private companies have grabbed a bigger share of the $7 trillion spent every year on public services, the impact of privatization on pay, benefits, and income inequality has become more pronounced. In their many case studies, the authors show how contracting out has been a win-win for the rich and powerful, but rarely anyone else. The cost-savings promised by privatizers have been achieved at the expense of living wage jobs, with decent benefits, in the public sector. Food service workers, custodians, nursing assistants, and housekeepers have seen their wages cut and benefits stripped, leaving them eligible for food stamps or Medicaid. White collar professionals, like teachers and librarians, are targets as well, when privatization leaves them without union protection or job security but covered by charter school employment contracts with draconian “non-compete” clauses, that limit job mobility.

The authors provide a useful history of privatization as a bi-partisan political strategy, tracing its roots to the theories of free-market economist Milton Friedman and attempts to implement Friedman’s ideas during the two-term presidency of Ronald Reagan. In the late 1980s, Reagan’s White House Commission on Privatization came up with plans to privatize “public housing, federal loan programs, air traffic control, education (through vouchers), the Postal Service, prisons, Amtrak, and Medicare.” As the authors note, “privatization got a huge boost from racism,” in the aftermath of legal victories, won by the southern Civil Rights movement from the 1950s through the 70s.

“When African Americans won voting rights, access to segregated spaces, and public benefits, a racist core of the American public reacted by vilifying public goods,” which has led to everything from underfunded schools to water systems laced with lead and profiteering from welfare case management and food stamp administration. The authors also show how Democrats have been complicit with Republican office holders in “treating us as mere consumers of public services rather than citizens.”  President Bill Clinton “found privatization useful for precisely the same reasons that Reagan Republicans had—it gave the appearance that government could be cut without cutting services.”

In the 1990s, Clinton’s “Reinventing Government” initiative, directed by Vice-President Al Gore, helped set the tone with its spurious offer of a “customer service contract with the American people.”  Drawing on the work of historian Lizabeth Cohen and others, the authors argue persuasively that, when market relationships became the basis for how citizens relate to their government and private interests start peddling formerly public goods, “the free market can’t avoid creating exclusions.” Soon, “school choice” devolves into segregation. Public parks and highways are divided into general versus premium services. In the midst of a national health crisis, ventilators go to the highest bidder.”

Turning Back the Tide

“The Privatization of Everything” is not just an invaluable critique of corporate America’s fifty-year campaign to turn public goods into private profit centers, it also includes reproducible examples of successful anti-privatization fights. As the authors note, public library users in Pomona, California turned out in large numbers to block the privatization of municipal libraries, a development that would have left library employees at risk of losing jobs, pensions, and other benefits. In Atlanta, a coalition of public transit users, transit workers, and other public employees helped save the city’s bus system from a private take-over. Voters rallied by the Massachusetts Teachers Association and its allies rejected a heavily-funded attempt by the charter school industry to expand school privatization in Massachusetts.

Between 2003 and 2019, more than seventy U.S. communities were able to take control of local water systems away from private contractors. In Felton, California, city officials created a public co-op to take their local water infrastructure back from the investor-owned California Water Company. In Missoula, Montana, concerned citizens and city leaders waged a long but successful battle to buy its waterworks from the Carlyle Group, one of the largest private equity funds in the world. In Baltimore, a proposed water system take-over by Veolia, another global giant, was “stopped in its infancy after a sustained public outcry,” generated by community organizations which exposed Veolia’s secret meetings with city council members to win their support for privatization.

Cohen and Mikaelian conclude with a six-step strategy for “regaining public control over public goods” in other places. One key element of that strategy is political education and action, that public sector unions and their members must play a central role in. While the authors believe that “the public mood is turning against privatization,” they warn that pandemic created “economic devastation” has created new fiscal constraints on state and local government that could lead to more contracting out of essential services and more short-sighted selling of public assets to the highest bidder. No one has a bigger stake in preventing that from happening than the 20 million workers who provide these services, benefit from them, like their fellow citizens, and help fund the public sector, through their own tax dollars. Public employee union activists, engaged in anti-privatization campaigns, will find that “The Privatization of Everything” contains plenty of ammunition useful now and in the future.