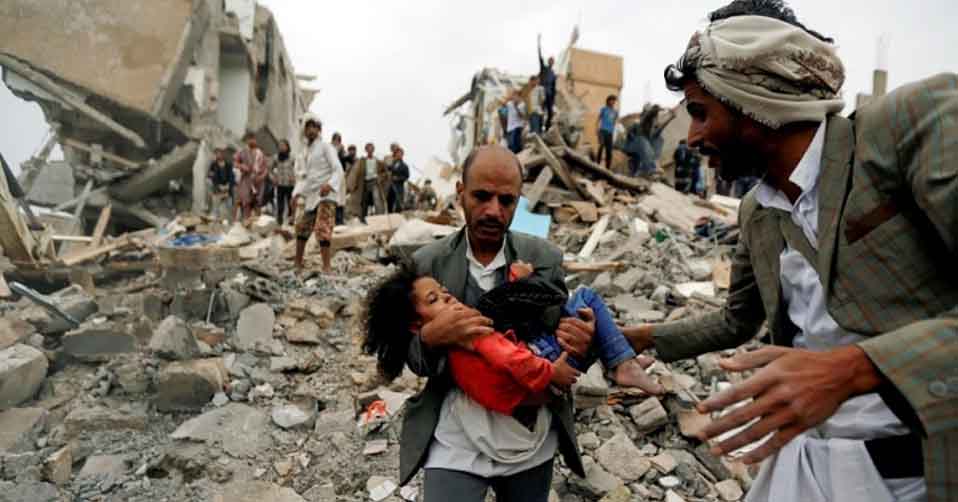 How Rational Can The US Be In Dealing With Yemen And Iran?

Above photo: The aftermath of an airstrike in Yemen. Khaled Abdullah/Reuters.

We’re also stepping up our diplomacy to end the war in Yemen — a war which has created a humanitarian and strategic catastrophe. I’ve asked my Middle East team to ensure our support for the United Nations-led initiative to impose a ceasefire, open humanitarian channels, and restore long-dormant peace talks….

And to underscore our commitment, we are ending all American support for offensive operations in the war in Yemen, including relevant arms sales.  – President Biden, foreign policy speech, February 4, 2021

This announcement does not augur peace in Yemen any time soon. Rather it looks a bit like political mystification that some have chosen to celebrate now, regardless of what it actually means, apparently in hope of making it a meaningful, self-fulfilling prophecy some time in the future. This does not seem likely, given what Biden actually said, but we shall see.

For the foreseeable future, Yemen, the poorest country in the Middle East, will remain the victim of a Saudi war of aggression and Saudi war crimes. Since March 2015, with the full support of the Obama administration, Saudi Arabia and its allies have turned Yemen into the world’s worst humanitarian disaster, as assessed by the United Nations. Six years of relentless bombing of military and civilian targets alike, including pumping stations and hospitals, weddings and funerals, has devastated the country. Saudi terror bombing not only kills directly, it destroys the limited infrastructure of a very poor country, creating the conditions that have caused the deaths of more than 100,000 Yemenis from famine and disease. Millions more currently need international aid if they are to survive.

One hopeful sign now is the Biden administration’s announcement on February 5 that the US designation of the Houthis as a terrorist organization has been rescinded. This was a necessary corrective, not a bold move. The Houthis are ethnic natives in northwest Yemen. Their current territory holds about 70% of Yemen’s 30 million people. They are the victims of Saudi terror bombing.

The Houthis are also the victims of US Iranophobia, the paranoid policy framing that sees Iranian devils behind every difficulty in the Middle East, regardless of any lack of evidence. Former secretary of state Mike Pompeo is an Iranophobe, as well as a Christo-fascist. In a midnight news dump on January 10, Pompeo announced the terrorist designation to go into effect on January 19. The announcement provided little basis in policy or fact and received bipartisan criticism because its most likely impact would have been to exacerbate human suffering in Yemen.

While the Biden administration’s decision to rescind the terrorist designation eliminates a factor that would have made the Yemen situation worse, there is little in Biden’s speech that promises to make the situation better any time soon.

Supporting United Nations efforts is probably helpful as far as it goes, but it’s a far cry from US engagement on the peace side to match US engagement on the war side. And to suggest that the UN might “impose a ceasefire” implies a military deployment that is pretty much imaginary. The conflict within Yemen is multi-sided, with few if any clearly-defined frontlines.

The Houthis control most of the northwest, but not all, and that may be the most coherent governmental region in the country. In the south, the official Yemen government, unelected but imposed by international fiat and controlled by Saudi Arabia, shares territory with its own rebel faction controlled by the UAE (United Arab Emirates). The eastern two-thirds of the country, mostly desert, contains islands of control under Al-Qaeda, the Islamic State, and other, smaller factions.

The US was misguided, at best, to sanction the Saudi aggression. The US was criminal to support the Saudi aggression for the past six years. Now Biden has said the US is ending “all American support for offensive operations in the war in Yemen.” There are NO defensive operations in that war, the war is effectively all in Yemen. And when Biden says the US is ending all American support, does that mean no more military guidance from the US mission in Riyadh? No more logistical support? No more intelligence sharing? No more training Saudi pilots? No more target selection? No more mid-air refueling? No more maintenance for Saudi bombers? No more spare parts? Does it mean an end to the US naval blockade, itself an act of war?

The US has been doing all these things, and probably more, with Obama’s and Trump’s blessings since 2015. Will the US stop doing all of them now, or in the near future? Biden didn’t say (the State Department later hedged). Biden promised to end “relevant arms sales,” whatever “relevant” is supposed to mean, since it means nothing on its face. And in the next line of his speech, Biden revealed the calamitous duplicity of the US position all along:

At the same time, Saudi Arabia faces missile attacks, UAV strikes, and other threats from Iranian-supplied forces in multiple countries. We’re going to continue to support and help Saudi Arabia defend its sovereignty and its territorial integrity and its people.

This is cover-your-butt spinning to excuse future failures planned to appease the Saudi aggressors. Saudi Arabia faces missile attacks and UAV strikes from the Houthis because the Houthis, in the face of relentless attack, have been fighting back.

Biden’s undefined “other threats from Iranian-supplied forces in multiple countries” is murky, non-specific, unverifiable. This makes Biden sound like he’s channeling Pompeo in pure Iranophobe-speak. This fearmongering portends nothing good for Yemen.

Saudi Arabia’s sovereignty is under no discernible threat, except perhaps from within the monarchical police state. So the US is committed to defending an anti-democratic dictatorship that murders its critics in the most brutal fashion? How is that a good thing?

Saudi Arabia’s people face a chronic, lethal threat from their own government. There are occasional, minor threats from dissidents. Threats from abroad are likewise all but non-existent. Those missiles and UAV worrying Biden have apparently killed no one; there are no Saudi civilian casualties from the Yemen war, just the 100,000-plus Yemenis.

So, in his speech, Biden said that he is ending offensive operations in Yemen, but committed — he went on to commit to defending Saudi borders. Now, this is really concerning to me, because I still remember the statement that the White House put out when Obama initially entered the war in March of 2015, and that was the exact same framing, that they were defending Saudi territory from the Houthis. This is what led us here — six years of war, over 100,000 Yemenis killed, 250,000 people starved to death, if not more, the entire country destroyed. And the framing was always to protect Saudi borders.

In reality, in 2015, the Houthis were nowhere near the Saudi border, they were deep in southern Yemen, on the verge of overrunning Aden and driving out the Yemeni puppet government controlled by Saudi Arabia. That was when the Saudis launched their undeclared war; that was when the US supported the unrestricted aerial bombardment of a country with no air defense.

And beneath all the other arguments was the widespread fear of Iran, Iranophobia, based on little to no evidence. Iran is a despised Shia Muslim state in a Sunni Muslim world, and the mutual distrust is deep-seated and irrational, except that the Iranians remember that the western allies of Saudi Arabia imposed one of the world’s bloodier dictatorships on Iran. The Iranians weren’t ever very grateful, so how could the US trust them after that: obviously, if Iran had an interest in supporting the Houthis in resisting a puppet government controlled by the Saudi dictatorship, the US had a reason to intervene against the defenders of freedom. Or as Reuters reported in 2015:

RIYADH/ADEN (Reuters) – The United States is speeding up arms supplies and bolstering intelligence sharing with a Saudi-led alliance bombing a militia aligned with Iran in neighboring Yemen, a senior U.S. diplomat said on Tuesday….

“Saudi Arabia is sending a strong message to the Houthis and their allies that they cannot overrun Yemen by force,” he told reporters in the Saudi capital Riyadh.

“As part of that effort, we have expedited weapons deliveries, we have increased our intelligence sharing, and we have established a joint coordination planning cell in the Saudi operation center….”

That US diplomat in 2015 was US Deputy Secretary of State Antony Blinken, now President Biden’s new Secretary of State. He was an architect of a criminal war rooted in a largely irrational fear of Iran, along with cynical fealty to Saudi Arabia. Since 1979, US relations with Iran have been poisoned by Iranians taking American diplomats hostage, then manipulating those hostages to push Americans to elect President Reagan. There’s plenty to regret on both sides. But on February 5, Secretary Blinken started a new round of talks with American allies aimed at shaping a new relationship with Iran. The trick will be to treat Iran as a rational adversary, and even more so to persuade Iran that the US can be rational, too. The Yemen initiatives are steps in a positive direction, but only baby steps.

William Boardman has over 40 years’ experience in theatre, radio, TV, print journalism, and non-fiction, including 20 years in the Vermont judiciary and a stint with Captain Kangaroo. He has received honors from Writers Guild of America, Corporation for Public Broadcasting, Vermont Life magazine, and an Emmy Award nomination from the Academy of Television Arts and Sciences. A collection of his essays, EXCEPTIONAL: American Exceptionalism Takes Its Toll, published in September 2019, is available from Yorkland Publishing of Toronto or Amazon.