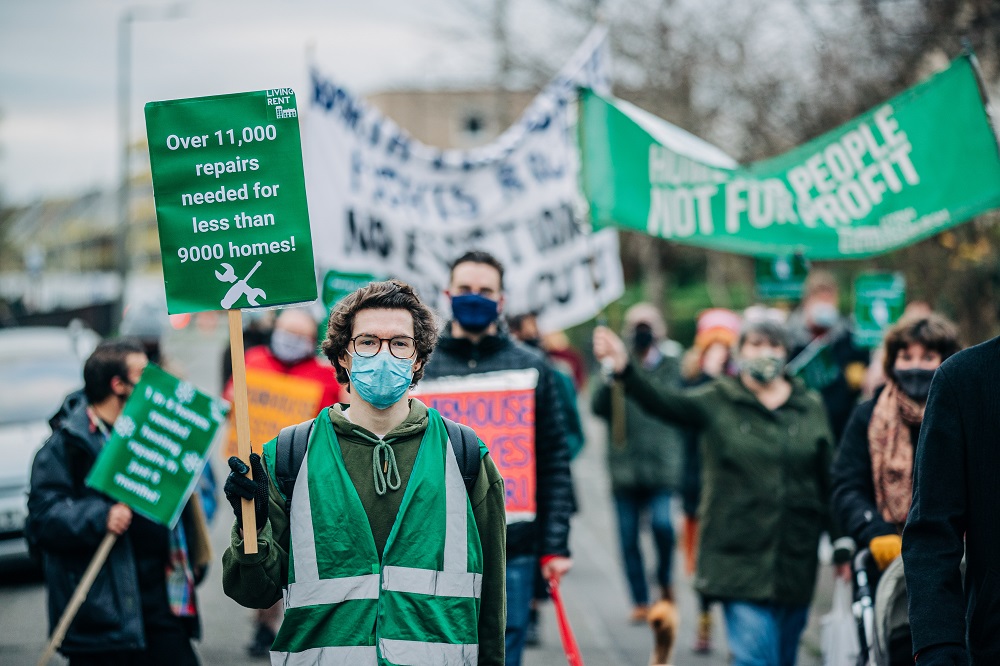 How Scotland’s Rent Freeze Was Won

Above Photo: Living Rent, Scotland’s tenants union, have been working for years to push the agenda of housing to be recognised as a right. Living Rent.

Now we need a freeze across the UK, and proper rent controls to stop landlords taking the piss for good.

On 6 September 2022, as part of their new programme for government, the Scottish Government announced a rent freeze and eviction ban effective immediately until March 2023. Further clarity has yet to be brought in around key questions such as whether the freeze will apply retroactively, whether purpose-built student accommodation will be part of it, how it’ll impact tenants who pay rent and energy bills together, or how it will be implemented. Crucially, we’re concerned that this freeze applies primarily to private tenants as social housing tenants’ rent is increased once a year, on the 1 April, missing out many tenants who are struggling.

So we’ve run you through the headline victory and our many unanswered questions. But how did we get there?

First, the context. Housing is a devolved issue, meaning that the Scottish Government can set its own policy. The state of the rental market across the social and private sector in the country is dire. Rents are skyrocketing and our homes are often in a state of disrepair, with poorly insulated and draughty homes further hiking up our energy bills. Rent in Glasgow and Edinburgh has risen over 63 percent in the last decade while our wages have stagnated. This situation is compounded by issues such as short-term lets being allowed to run rampant in tourist hot spots such as Edinburgh, Skye, and other islands, or the prioritisation of luxury accommodation developments at the expense of affordable homes.

Second, the political situation. Last year, the Scottish Government committed to rent controls within the government term as part of a cooperation agreement between the SNP and the Scottish Green Party. While great, simply put, tenants cannot wait until the end of 2025 for rent controls. We are struggling now: our rents are out of control and the majority of our homes are energy-failing, EPC D or below.

As a result, since August 2021, we’ve been making it crystal clear to the government that we need emergency measures until proper rent controls are brought in. Scottish Labour MSP Mercedes Villalba brought forward a previous rent freeze motion in June 2022, but it was voted down with only a few Scottish Labour MSPs supporting it. Then we outlined how this failure to provide emergency measures has meant that countless tenants have been evicted or suffered from a rent hike, amid what we know to be the worst cost of living crisis in the last 30 years. Over the summer we outlined how tenants across the country have been reporting rent hikes for months indicating a wave of silent evictions Scotland-wide.

Third, the grassroots organising. There is no doubt for us that our work of organising tenants throughout Scotland, alongside similar organisations in the UK, have brought the questions of rents controls and improving housing rights to the forefront. Living Rent, Scotland’s tenants union, have been working for years to push the agenda of housing to be recognised as a right. Living Rent, initially set up in 2014, has achieved so much in a few years.

Started as a group campaigning to change private tenancy contracts, leading to the creation of a private residential tenancy which affords renters greater flexibility, more protections from evictions, and rolling leases, we chose to become a union and now have thousands of members all across Scotland. Similar to a trade union in structure with dues-paying members, Living Rent is a democratic grassroots organisation run by tenants for tenants. Built from neighbourhood level up, we build power through community and solidarity to fight against the power imbalance between tenants and landlords, to curb short-term lets, or to address the climate crisis by linking up our energy failing homes, our rising bills, and Scotland’s carbon emissions.

The everyday work of the union is around member defence, supporting members against illegal evictions, rent increases, and deposit thefts, and for long due repairs, and we’ve won back thousands of pounds for tenants. Locally, we organise around housing and community issues like lack of public services, lack of affordable housing, and repairs. Nationally, we have won greater flexibility for tenants within contracts, the abolition of no-fault evictions, controls of short-term lets, and a winter eviction ban during the pandemic. And overall, we have brought tenants’ rights and rent controls into the spotlight.

In December 2021, the Scottish Government released a housing consultation titled ‘A New Deal for Tenants’. Living Rent wrote a detailed response, which over 7,000 people endorsed and advocated for rent controls. Our vision is of a points-based system tied to the quality of the property, incentivising landlords to keep up repairs and bringing rent prices down. The Scottish Government published the results of the consultation recently and although the response from tenants, charities, and unions was strong, the opposition from landlords was portrayed as a more balanced version. It is clear that while the power of the people is behind us, we have a long way to go in terms of creating a housing market that works for tenants, not just landlords, and a discourse that fairly represents those tenants.

As well as rent controls, our homes urgently need retrofitting. Scotland’s winters are cold and our homes are often unfit to deal with colder temperatures. Overall, 49 percent of the Scottish housing stock is at EPC D standard or below, meaning that our extortionate energy bills will be made even worse by poorly insulated homes—and this is even worse in private rented homes, where 57-60 percent of homes are EPC D or below. Fuel poverty is already a huge issue across the country for tenants, and badly protected homes contribute even more to the burgeoning crisis.

Recently, as a union, we have been engaged in strike solidarity across Scotland, supporting trade unions on picket lines, fundraising for those on strike, and providing support to different campaigns. As Living Rent member Annie said in her speech at the Scotland launch of Enough is Enough, Living Rent is made up of ‘passionate and angry people. We’ve seen the cost of greed—it’s not a cost of living crisis, it’s a cost of greed crisis’. Our struggles are related—we need solidarity across the left to combat the biggest assault on workers, tenants, and the working class we have seen in years.

In the coming months, as we face a winter of discontent, our homes will only get colder, and we need to be adequately protected with affordable rents. Rent controls to bring rents down are crucial. We have had enough of being treated as an income for landlords who refuse to provide us with basic insulation, security in our homes, or any stability. If we want to build a proper pushback against this cost of greed crisis, we need people to be joining their unions and fighting back, in their homes, in the communities, in their workplaces, and across the country. We need more tenants to join Living Rent in standing up for our rights.