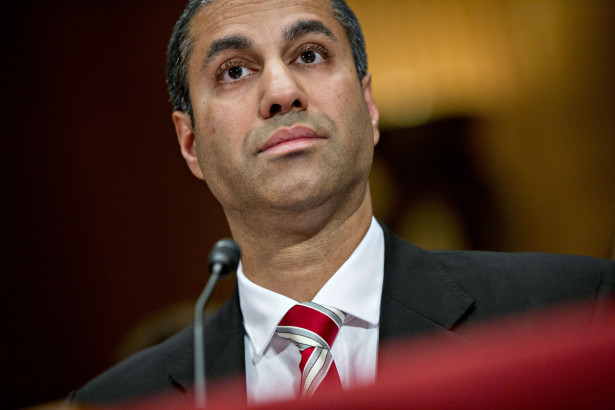 The debate over internet regulation has steadily morphed over the last few years from an insular fight between telecom experts into a standard-issue political screaming match. The process seemed to devolve fully over the last week, starting when Federal Communications Commission Chairman Ajit Pai released his plan to roll back Obama-era open internet rules on Nov. 22, the day before Thanksgiving.

The proposal was a logical candidate for a pre-holiday news dump.  Significant public support has built over the last three years for net neutrality, the principle that internet providers shouldn’t give preferential treatment to certain websites and services. If internet providers have this power, the argument goes, they could smother views they don’t like, or services that compete with their own. The energy to prevent this is coming nearly entirely from the Democratic side, and resulted in the strongest-ever net neutrality protections in the form of the 2015 Open Internet rules. Most Republicans thought the rules were unnecessary, and hated that the FCC claimed greater regulatory power over companies like Comcast Corp. and AT&T Inc. in implementing them.

For some reason, restoring the lost power of huge telecom companies hasn’t lit a fire in grassroots circles on the right, a point that Pai’s political allies have been acknowledging privately for months. So the FCC chair came back from Thanksgiving looking to create a spark. In a speech on Tuesday, Pai angrily denounced celebrities and tech companies who have been criticizing his plans to undo the 2015 rules. Hollywood is always a good scapegoat, of course, and Republicans looking to stir up anger in 2017 do well to frame their issues as a response to the unchecked power of Silicon Valley.

According to Pai, the big tech platforms are the true threat to freedom of speech and open competition on the internet, and giving them any additional leverage is a mistake. “They might cloak their advocacy in the public interest, but the real interest of these internet giants is in using the regulatory process to cement their dominance in the internet economy,” he said on Tuesday. The next day he followed up by criticizing Twitter for blocking messages and cancelling conservative accounts. “When it comes to an open internet, Twitter is part of the problem,” he said.

This isn’t a new tactic for Pai. “He had the same complaints about us being shills” for internet companies, said Tom Wheeler, the FCC chairman who ushered in the 2015 rules. Anger towards tech on the right has only grown since then. Brent Skorup, a research fellow at the Mercatus Center, a research organization at George Mason University with a free market bent, regularly talks to Republican Congressional offices about tech policy. “They see a lot of these issues through the lens of payback for tech companies,” he said. (Skorup supports Pai’s approach.)

An irony to the Silicon Valley scapegoating is that people from both sides of the debate say that the biggest internet companies have been less than fully engaged in the net neutrality debate. It has been a point of consistent grumbling from the most enthusiastic net neutrality advocates. If Comcast started charging web services for faster internet speeds, Facebook Inc. and Alphabet Inc.’s Google would have no trouble paying the tolls. Smaller companies might, however, leaving them at further competitive disadvantage. There’s a pro net-neutrality school of thought that the rules are needed to prevent the internet giants from gaining an even greater advantage over smaller companies.

A perfectly consistent philosophy for internet regulation would be to support net neutrality to reign in monopolistic internet providers while also supporting new rules that would reign in monopolistic tech companies. In fact, it’s the position staked out by one of the Democratic lawmakers who has been most vocal on tech in recent years, Minnesota Senator Al Franken. “As tech giants become a new kind of internet gatekeeper, I believe the same basic principles of net neutrality should apply here: no one company should have the power to pick and choose which content reaches consumers and which doesn’t,” he said in a speech to the Open Markets Institute, a research and advocacy group focused on antitrust issues, last month. (The chances that Franken will play a leading role have clearly diminished in recent weeks, obviously, but the framework would be there for someone else to pick up.)

Don’t expect Pai to follow up his critique of Silicon Valley with any regulatory action. His main impact on the FCC since taking the agency over has been to have it do less in nearly every instance. Republicans presumably wouldn’t want the agency get into the business of policing speech. “It’s hard to imagine what substantive thing he would do, aside from throwing gasoline on the fire and letting some conservative take the charge from there,” said Zach Graves, director of technology and innovation policy at R Street Institute, a libertarian-leaning think tank focused on tech issues. “He probably can’t be the person to lead this.”

But stoking the fire is an end in itself. Pai has the votes to upend the way the federal government treats competition on the internet. His chosen plan has made many people very angry. So he’s taken the default strategy of anyone involved in American politics circa 2017 – whip up some anger of his own.