How Solar Panels On A Church Rooftop Broke The Law In N.C.

Above Photo: An environmental group installed solar panels atop Faith Community Church three years ago to sell the church clean energy at rates far lower than the local utility’s. A court ruled that by selling the power, the group violated state restrictions. Credit: NC WARN

A North Carolina environmental group that tried to challenge the state’s utility monopoly by installing solar panels on the roof of a predominantly African-American church and selling the church cheap, clean power has lost its appeal to the state’s highest court.

Advocates say they are disappointed in the ruling, but they aren’t giving up the fight to lift restrictions on clean energy.

The case involved an attempt to bust through restrictions that solar advocates face in much of the Southeast.

The region has a history of maintaining strong utility monopolies while other states have opened their markets to competition. The result, advocates say, limits rooftop solar in a region with some of the strongest solar power potential.

The utilities argue that electricity generated by customers or sold by third-party providers—in this case the environmental group that was selling power to the church—would upend their business model, leaving them with fewer customers who would then have to pay more for power. Often, when states in the region have changed the rules to expand access to rooftop solar, they have done so within a framework set by the utilities and with restrictions.

“We are pleased with the swift decision by the N.C. Supreme Court,” said Randy Wheeless, a spokesman for Duke Energy, one of the nation’s largest utilities, which serves much of the state. The speed of the ruling was notable, coming just a few weeks after oral arguments.

Who Gets to Provide Electricity?

The North Carolina dispute started three years ago on the roof of a red brick church in Greensboro. NC WARN, a local environmental group, paid about $20,000 to install a solar array on the building and began selling power to Faith Community Church, charging it 5 cents per kilowatt-hour, a rate well below the 11 cents per kilowatt-hour the congregation had been paying Duke Energy.

It was an intentionally provocative project that NC WARN wanted to use as a test case for whether regulators would allow it. The church’s pastor saw the solar panels as an act of environmental justice.

“Out of our faith tradition, when you fight the good fight, that itself is a (way of) winning,” said Rev. Nelson Johnson, the recently retired pastor, who is known across the state for decades of work on social and economic justice issues.

The North Carolina Utilities Commission determined that the arrangement violated state restrictions on who can sell electricity, and it fined NC Warn $60,000 for selling power to the church.

NC WARN appealed, and the state Supreme Court on Friday ruled against it. The justices affirmed a lower court’s decision in the case without elaborating.

The question at the heart of the case was this: Who gets to provide electricity in a warming world where demand for distributed solar power is rising?

According to the lower court’s 2-1 ruling, the answer is that in North Carolina only a utility company can sell electricity to end users. In this case, the utility was Duke Energy, the Charlotte-based giant that serves millions of customers in six states.

The key point in the case was that NC WARN was selling electricity on a kilowatt-hour basis, which regulators found was a violation of rules that Duke Energy has the exclusive right to sell electricity to end users in its territory.

(Solar leasing, which became legal in North Carolina with a 2017 state law, is a different financing method in which customers pay a flat fee per month to lease the equipment and the fee is not tied to the amount of electricity generated.)

NC Warn stopped charging the church for the electricity during the case and has said it likely will donate the system to the church.

Looking ahead, Warren says he will continue to fight Duke, including working with faith leaders to organize the public. His group hopes to mobilize support for changes to state law and convince voters that the 2017 law fell far short of “what’s needed to help avert runaway climate chaos.”

Solar Restrictions Across the South

The case has implications for other states. Nine states have laws or rules banning the type of ownership NC WARN wanted to use, according to the Database of State Incentives for Renewables and Efficiency, and the rules are unclear in 15 other states. A victory by NC WARN likely would have inspired similar legal strategies in some of those places.

Of the nine, all are in the South or near it.

“This is really about, to some extent, consumers being able to choose their own destiny and be able to invest in clean energy and do it onsite themselves, and be able to do that in a state that has a monopoly on utility sales,” said Lauren Bowen, a staff attorney for Southern Environmental Law Center.

NC WARN’s arrangement with the church is called a third-party power purchase agreement. This type of financing would likely be legal in at least parts of 26 states plus Washington, D.C., and Puerto Rico, according to DSIRE.

No. 2 in Solar, But Far Behind in Small-Scale

Duke Energy has been involved in several state-level fights over rooftop solar, including current ones in the Carolinas. The outcome often has been very close to what Duke wanted.

“In a way, it has nothing to do with solar,” Duke’s Wheeless said of the NC WARN case. “They could have a gas generator on the roof and be selling electricity and it would still be illegal.”

He points out that Duke has invested heavily in solar. North Carolina ranks second in the country, behind only California, in installed solar capacity. Most of the development is utility-scale solar farms in rural areas that sell power to Duke to then resell to consumers. 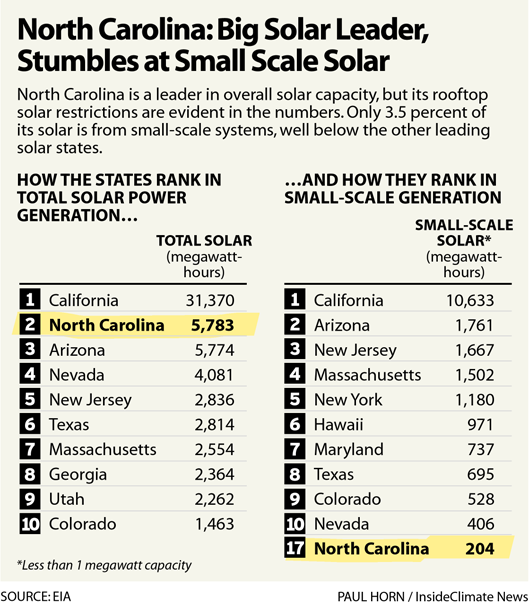 But while North Carolina is a leader in total solar, only 3.5 percent of its solar output was from small systems last year, according to the Energy Information Administration. This is by far the lowest share of all the states in the top 10 for overall solar output.

In contrast, California, which last week adopted new rules to require rooftop solar on most new houses and low-rise apartments, gets 34 percent of its solar output from small systems.

Some Southern States Are Opening Up

Electricity utilities have monopolies in much of the south, and often that goes hand in hand with restrictions on rooftop solar.

“Sometimes folks in North Carolina and other parts of the Southeast feel like the deck is stacked against them, and that the monopoly utility holds all the cards,” said Bowen, of the Southern Environmental Law Center. “There’s still a gap there between what folks want to do and what’s available to help them get there.”

But there are some exceptions. Among them:

On the opposite side of the spectrum, Alabama has some of the most severe restrictions, including bans on financing methods and an unusually high customer charge for systems to hook up to the grid.

Leasing may allow electricity users like the Greensboro church to achieve much of what they want, which is to reduce their electricity costs and take a stand for clean energy. It remains to be seen how this works in practice since North Carolina is in the early stages of allowing leasing. Still, the power-purchase agreement remains the more desirable option for many customers because there is often a guaranteed monthly savings on energy costs.