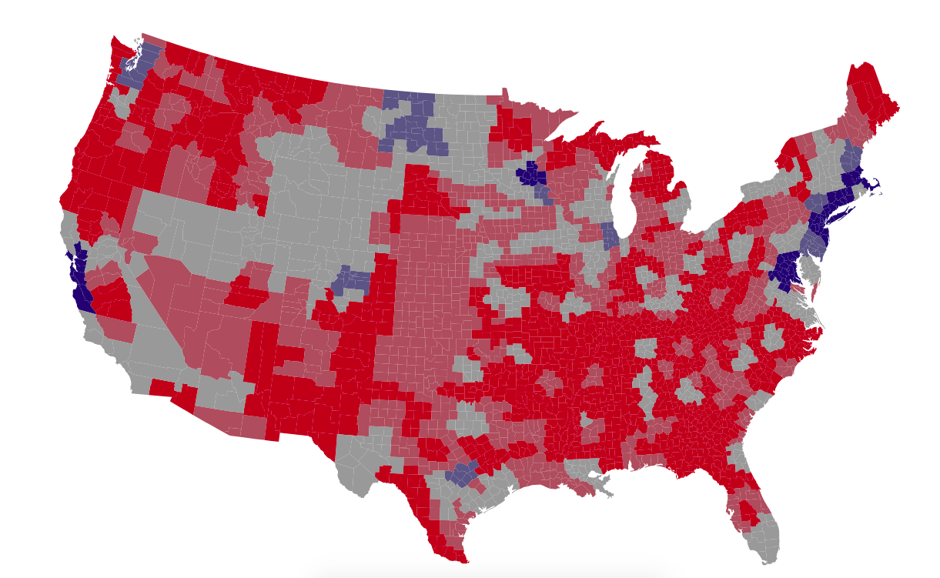 Above Photo: The United States is increasingly losing its middle income regions, indicated in gray on this map. Social Forces

The two gravest challenges facing America today, economic inequality and geographic divides, are increasingly intertwined. Economic inequality has surged with nearly all the growth being captured by the 1 percent, and the economic fortunes of coastal superstar cities and the rest of the nation have dramatically diverged.These two trends are fundamental to a new study by Robert Manduca, a PhD candidate in Sociology and Social Policy at Harvard University. The study uses census microdata culled from 1980 to 2013, and finds that America’s growing regional divide is largely a product of national economic inequality, in particular the outsized economic gains that have been captured by the 1 percent.

Up until now, most researchers have believed America’s rising geographic divides to be a consequence of the way people sort themselves by education, occupation, and income. In Bill Bishop’s influential book, The Big Sort, the basic idea is that more skilled, affluent, and educated Americans move to the booming parts of the country—superstar cities like New York and Los Angeles and tech hubs like San Francisco, Seattle, and Boston—leaving the rest stuck in less-advantaged parts of the country.

To some, this is simply the effect of the clustering of talent and skill. For others, it is the result of the preferences of advantaged groups for amenities and other lifestyle factors. Some also say it is the consequence of land-use restrictions, which limit the development of economically successful places, or other barriers to growth.Manduca does not deny that these kinds of geographic sorting forces are in play. Instead, he finds that the staggering growth in the economic divide helps to magnify such spatial division. The rich and the poor occupy different places to begin with, so as income inequality rises, the geographic discrepancies also rise as a consequence, with rich places getting richer and poor places falling further behind. Or as he puts it: national inequality acts like a powerful wave that “washes over an uneven landscape, leaving behind deep pools in some areas and shallow puddles in others.” The rise in economic inequality, even though not inherently spatial, does in fact have spatial consequences.

This growing pattern of spatial inequality can be clearly seen in the maps below. In 1980, there were only two U.S. city-regions, Washington, D.C., and the New Jersey suburbs of New York City (in dark blue on the map), where mean family income was more than 20 percent higher than the national average. Most of the rest of the map is shaded in gray (indicating mean family income ranges between 10 percent higher or lower than the national average) or light red, with some pockets of dark red.

The map for 2013 is very different. Now we see many more regions shaded in dark red than before, indicating the mean family income is less than 80 percent of the national level. At the same time, there are many more—and larger—bands of dark blue. The blue of the Washington, D.C., region grew to include more of Virginia and Maryland, and the blue New York City region grew to include more of New Jersey and Connecticut. Plus, the Bay Area, Boston, and Minneapolis, are now blue on the map.

The pattern can also be seen in the scatter graph above which compares mean family income for U.S. regions in 1980 to mean family income in 2013. Coastal metros like New York and its suburbs, Boston, San Francisco, and Washington, D.C., are above the line. These places, which were already more affluent in 1980 have grown even more so by 2013. But other city-regions—a few large ones like Detroit, Phoenix, and Miami, and many more small ones—are below the line, indicating the relative decline in their economic fortunes.

Indeed, fully half of growth in spatial inequality over the past three decades can be pinned on the economic gains of the 1 percent, with the rest of the top 10 percent of income earners accounting for an additional 25 percent of America’s geographic divide. As the 1 percent has hauled in a growing share of the economic pie, the places where they live have pulled away from the rest of the country. “Income sorting has played a role in driving regional divergence, but income inequality has played a larger one,” Manduca writes.Using a counterfactual approach to compare the impact of geographic sorting and national income inequality based on 1980 baselines (before national inequality exploded), Manduca finds that: “If income inequality had remained constant at 1980 levels, the observed income sorting would have resulted in just 23 percent as much divergence as actually occurred. In contrast, even if there had been no income sorting whatsoever, growth in income inequality would have produced 53 percent of the observed divergence on its own.”

This suggests that many of the policy strategies advocated to deal with spatial inequality—such as place-based policies to build up lagging places, people-based policies to train them with more skills, or policies to increase housing supply—may help at the margin, but will ultimately not make much of a significant dent in America’s worsening regional divide. That’s because they fail to address a key underlying driver: national income inequality and its geographic consequences, where hugely outsized gains have gone to a very small fraction of America’s places.“Regional income divergence results in large part from national trends, which are generally attributed to changes in economic policy and the economic environment like financial deregulation … and declines in the real minimum wage, among others in the 1970s and 1980s,” Manduca told me via email. “This means that regional income disparities are a national problem.”

And this has implications for the way we think about and respond to different parts of the country. “We’re often too harsh on economically struggling regions,” he adds. “We tend to blame them for their troubles, and say that they’re not doing enough to attract or create high-paying jobs.”At the other end of the economic spectrum, we also tend to blame expensive cities and their onerous land use restrictions for their increasingly unaffordable housing. Instead, it’s more helpful to think about how these local trends are largely a consequence of national-level policy changes.

Coping with America’s escalating regional divide cannot, and will not, happen unless we grapple with the even larger national problem of structural inequality and its causes. “Narrowing the disparities between different parts of the country will be almost impossible without also reducing the total amount of income inequality between people,” Manduca adds. This narrowing will take a big change the rules to reduce the hold the 1 percent has on the economy and redistribute wealth to a much broader spectrum of society.