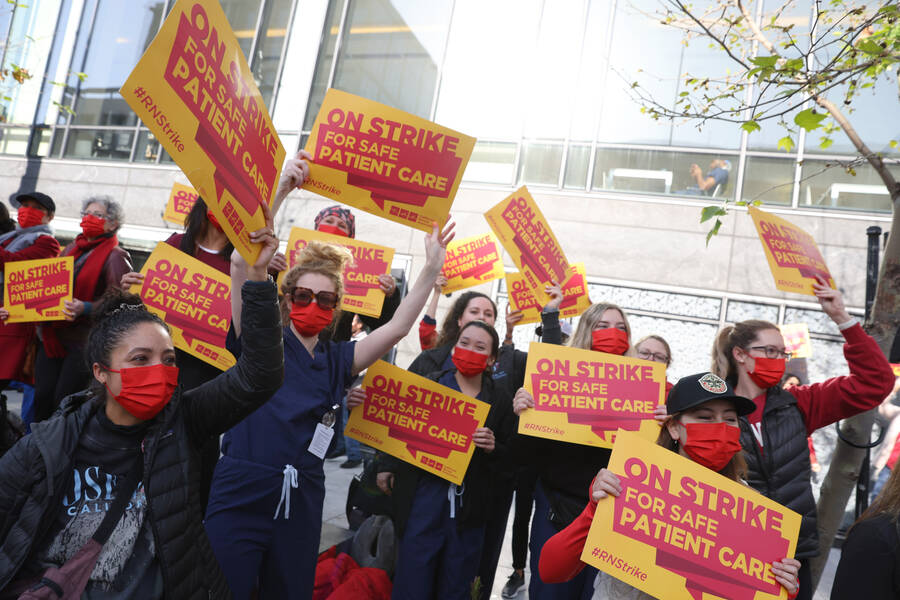 How The Pandemic Changed The Landscape Of US Labor Organizing

By Banding Together To Demand Justice On The Job, Essential Workers Paved The Way For A Resurgence Of Labor Unrest.

And Showed How To Create A Crisis For Capitalism.

The story of essential workers during the pandemic is part of the long unraveling of the New Deal. The destruction of the welfare state, the attack on unions, and the rise of neoliberalism provide the historical backdrop for the pandemic labor unrest. As workers’ fortunes came under renewed attack in the early 1970s, the historic gains of the New Deal were rolled back decades. Inequality became the defining feature of our economy as we arrived at a second Gilded Age. This was more than unfair — during the pandemic it had deadly consequences. A 2020 study found that in over 3,000 U.S. counties, income inequality was associated with more cases and more deaths by the virus.

In the immediate aftermath of the Great Recession of 2007 – 2009, the unemployment rate remained stubbornly high long after the crisis had been declared officially over. The solution to lagging employment growth was an explosion of low-wage service jobs. It was this new servant class of gig workers, low-wage healthcare workers, fast-food employees, maids, delivery drivers, and retail clerks who endured the most intense economic hardship during the Covid pandemic recession. They were deemed essential and worked through the pandemic, or they lost their jobs. Without this longer time frame for context, essential workers appear to be merely the product of the pandemic rather than the outcome of decades of political and economic shifts.

By April 2020, about a third of U.S. workers were designated as “essential” or “frontline” workers, tasked with laboring in person through the pandemic. Who was considered essential or not often seemed capricious. Employers carved out niches for themselves as essential, forcing their employees into dangerous workplaces, even though they served no public benefit. Walmart designated its store greeters as essential, putting countless workers at unnecessary risk. The state of Montana designated elite fly-fishing guides as essential. Kirk Gibbs, an electrician from Syracuse, New York, summarized his status as an essential worker like this: “I’m essential to the pocketbooks of rich contractors and essential for spreading the virus, but that’s about it.”

Across the world the designations varied even more. In fact, it wasn’t always clear what essential workers were essential for. Economic stability? Corporate wealth accumulation? Public health? Social reproduction? To ensure a pleasant experience for retail shoppers?

This mattered beyond public recognition. Because workers did not have a straightforward relationship to being classified as essential or not, their ability to collectively organize as such when necessary was inhibited.

Still, workers used the rhetorical power of their designation as “essential” to highlight their mistreatment and exploitation. In some cases, workers forced their managers, bosses, and corporate boards to provide lifesaving safety protocols, more paid sick days, raises, and better healthcare and other benefits. Were it not for workers blowing the whistle, we might never have known the hazards they faced or gotten the kinds of improvements that saved lives. In addition to these much-needed tangible gains for an eclectic class of workers, pandemic-era activism shifted the national conversation about worker justice in ways the previous decade failed to do.

A major consequence of labor unrest during the pandemic was that, against great odds, essential workers helped to transform the political conversation about work in America. They even influenced the Democratic Party’s established preference for austerity in ways that were unimaginable before the pandemic arrived.

Why did Joe Biden — who had built his entire career on not being Bernie Sanders — promise on the eve of his election to be “the most pro-union president you’ve ever seen”? Why did he come out in support of Amazon workers in what was the most hotly debated union election in recent history? Why did he immediately create a task force on Worker Organizing and Empowerment and pursue the Protecting the Right to Organize Act, groundbreaking legislation that would recast American labor law in workers’ favor?

“The marching order from the president,” said Jared Bernstein, a member of the president’s Council of Economic Advisers, “is everything we do in the job market space needs to reflect the importance of unionization.”

Biden didn’t have a change of heart. He was just reading the pulse of the country, and milquetoast socialism was the order of the day. Long-held popular assumptions about the goodness of unfettered capitalism were being challenged on a daily basis, in the press and in the workplace. The nature of the pandemic raised concerns about essential workers to issues of national security, which gave these workers’ struggles a larger audience and deeper significance. Just as Occupy Wall Street changed the conversation about inequality in America — focusing greater attention on systematic wealth concentration, not merely “greed” — labor struggles during the pandemic contributed to a new valuation of America’s working class.

Yet a year after campaigning to “get things done,” Biden wasn’t able to rally even his own party to his signature plans for jobs, infrastructure, climate, higher education, and voting rights. Nonetheless, many of the country’s major labor leaders seemed to be waiting for him to do exactly that before taking matters into their own hands.

When what was needed was decisive political leadership and militant organizing on a large scale, neither transpired. It wasn’t until spring 2022, led by historic movements within Amazon warehouses and grassroots campaigns to unionize Starbucks cafés, that labor seemed emboldened to chart a new course.

In 2020, a few important shifts happened in the way workers organize. First, workplace organizing and social justice struggles outside the workplace began to cross pollinate each other. Before the pandemic, the working class was mostly siloed in their own occupations or industries. In 2020, however, a frontline class emerged across multiple essential industries, leading to worker organizing efforts that bridged those divides, and even spilled over outside the workplace. Half of the mass strikes that year were led by nurses, but their picket lines attracted all kinds of other essential workers in solidarity, learning from those on strike, and then building their own movements back at their jobs. Moreover, social justice movements like Black Lives Matter began talking about the “Strike for Black Lives,” using the language and tactics of labor to address white supremacy and police violence.

The other thing that changed was that workers took matters into their own hands in ways that had not happened for decades. Whereas traditional labor organizing over the last half century has mostly been the job of official unions, in 2020, even workers without a union began to take action without support from organized labor’s officialdom. A shocking one third of all strikes in 2020 were led by non-union workers, an incredible risk to take given the nature of the other swirling crises. Unionized workers also struck or walked out without warning, built new coalitions, and won some material gains that would have never been possible without the horror of the pandemic. It’s this bottom-up approach that we now see taking hold most visibly in the campaigns to organize at Amazon, Starbucks, and among academic adjunct workers.

This activity didn’t show up in official statistics on labor unrest, which showed a comparably low level of worker agitation. But these differences, some of which persist today, characterized the pandemic labor movement.

Unique features of capitalist society exacerbated the Covid-19 pandemic and caused it to unfold in a spectacularly tragic way. The United States has only 4% of the global population but suffered about 22% of Covid-19 deaths in the first year of the pandemic. By 2022, the share of Americans who had died of coronavirus was at least 63% higher than in our peer countries, the result of our inferior healthcare programs and lower vaccination rates, especially among the poor. The most reasonable explanation for this incredible excess death rate is that our social system is designed to let it happen.

Labor under capitalism puts our society, especially workers, unnecessarily in harm’s way. The capitalist cocktail of ecological devastation and mass human migrations has given zoonotic disease a great leap forward. Urbanization and the destruction of tropical forests effectively eliminate the border between humans and the pathogens lurking inside wild animals. The subsequent decline of biodiversity combined with the erasure of those ecological borders presents new species as food sources. These processes have long been known as outbreak risks, and the same forces driving climate change will lead to new pandemics. This threat is explicitly accelerated by industrial agriculture and livestock production, which combine novel viruses with unsanitary working conditions, turning our food labor chain into a vector of disease.

Over the past five decades we’ve perfected the science and art of “just-in-time capitalism,” the on-demand supply chains and logistics hubs that make the world economy run. The absolute necessity of today’s globally interconnected web requires that all the inputs of a particular commodity or service stay operational as long as possible, which helped disperse the virus. Super-coordinated, high-tech systems of production, transportation, and distribution of goods and services were almost overnight transformed into arteries of disease transmission.

Global capitalism literally made us sick. Capitalist society made sure that millions of workers faced the ultimate dilemma: your money or your life.

White supremacy, nationalism, individualism, all key ingredients of the American creed, are obstacles to unity among working people. The pandemic changed some of that. As janitors lay in makeshift freezer morgues outside the hospitals they used to work in, while the owners of the hospitals were sheltering in second homes in Fort Lauderdale, it was hard not to see the world as structured first and foremost by class power.

When employers control access to healthcare, workers either lose it when they lose their job or are more easily bullied into working in dangerous situations to keep it. When only half the working population has a right to sufficient paid sick leave, the other half lives and works at the behest of others. When the working poor are denied the right to Medicaid, they are the captive subjects of a ruling elite. These developments are the inevitable outcome of a system where one class places profits over people.

If the pandemic has shown us anything, it’s that we need an alternative. The real antidote to the deadly failings of capitalism is socialism. To get there, workers will need to create a crisis for capital. The insurgent workers’ movements of the 1930s offer a glimpse of what this could look like. Large and unruly strikes swept through the country’s basic industries, challenging the authority of our most powerful capitalists. Strikes shut down production in automobile factories, steel mills, coal mines, and transportation hubs, forcing employers to negotiate and, eventually, President Franklin D. Roosevelt to intervene. Liberals look back in awe at what the New Deal accomplished, but they forget it was a compromise with the left flank of the labor movement. Today, labor can’t wait for legislation to ease its woes. The unrest during the pandemic was inspiring but fell far short of what is needed to force real change. History holds lessons for charting labor’s future.

It was tempting to view the pandemic as a sequel to previous crises. But the pandemic is more likely to be a prequel to whatever climate change and capitalist globalization bring us next. The risk, then, is not that we repeat the mistakes of the past, but that we transmit our vulnerabilities into the future. What happens next is up to us.