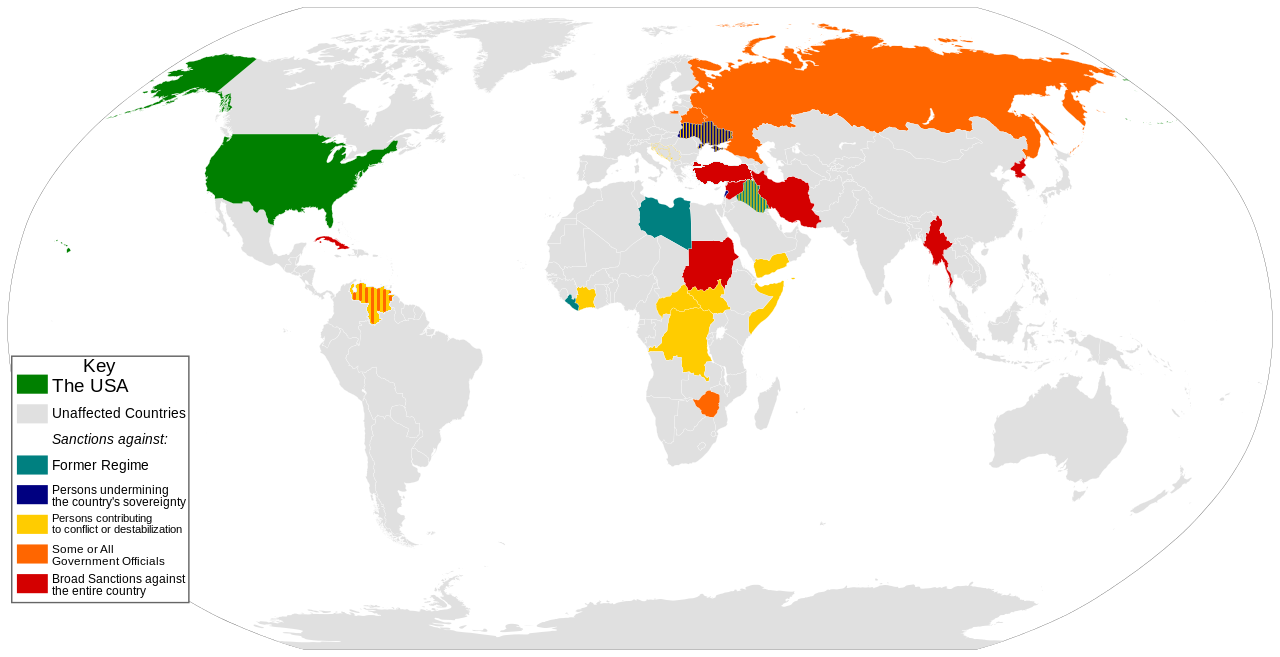 How The US Does ‘Diplomacy’

Above Photo: Countries sanctioned in some form by the US (as of 2020).

The U.S. doesn’t do diplomacy. Every country has its own interests. But the U.S. and its pricks in the State Department insist that its interests must have priority over all others. Any country that disagrees with that will be called out on this or that issue or will even get sanctioned.

March 19 2022: President Xi Jinping Has a Video Call with US President Joe Biden

The two sides exchanged views on the situation in Ukraine.President Biden expounded on the US position, and expressed readiness for communication with China to prevent the situation from exacerbating.

President Xi pointed out that China does not want to see the situation in Ukraine to come to this. China stands for peace and opposes war. This is embedded in China’s history and culture. China makes a conclusion independently based on the merits of each matter. China advocates upholding international law and universally recognized norms governing international relations. China adheres to the UN Charter and promotes the vision of common, comprehensive, cooperative and sustainable security. These are the major principles that underpin China’s approach to the Ukraine crisis.

The State Department said it would impose visa restrictions on Chinese officials it said are believed to be responsible for “policies or actions aimed at repressing religious and spiritual practitioners, members of ethnic minority groups, dissidents, human rights defenders, journalists, labor organizers, civil society organizers, and peaceful protestors in China and beyond.”

Mr. Modi, who spoke via videolink to Mr Biden, described the situation in Ukraine as “very worrying” and said he had spoken, several times, with both Ukrainian President Volodymyr Zelenskyy and Russian President Vladimir Putin and had not just urged peace, but also direct talks between them. India’s unwillingness to call out Russia by name for its attack on Ukraine has not gone down well in Washington, but U.S. officials have also said that they hoped countries that have relationships with Moscow might leverage them to bring about a resolution to the situation.

US Secretary of State Antony Blinken said the United States was monitoring what he described as a rise in “human rights abuses” in India by some officials, in a rare direct rebuke by Washington of New Delhi.”We regularly engage with our Indian partners on these shared values (of human rights) and to that end, we are monitoring some recent concerning developments in India including a rise in human rights abuses by some government, police and prison officials,” Mr Blinken said on Monday in a joint press briefing with US Defense Secretary Lloyd Austin, Foreign Minister Subrahmanyam Jaishankar and Defense Minister Rajnath Singh.

January 10 2022: Chas Freeman – Diplomacy as an Instrument of Statecraft: A Practicum

What distinguishes diplomats from courtiers, securocrats, and other bureaucrats in a national capital is a reliance on empathy: the ability to see the world through other eyes and to use this insight to induce others to see their interests the way the diplomat wants them to see them. It takes more than a diplomatic passport, position, or title to make someone a “diplomat.” Diplomacy, like other skilled work, requires knowhow gained through training, mentoring, on-the-job experience, and awareness of historical precedents. It is a calling and a role, not a job title.Yet diplomacy remains at best a proto-profession in the United States, thanks to the uniquely American reliance on the political spoils system to staff even key national security functions. This makes diplomatic appointments to benefit appointees and their political parties rather than the country. It thereby enshrines amateurism and incompetence. As the New York Herald-Tribune put it in 1857, in the United States “diplomacy is the sewer through which flows the scum and refuse of the political puddle. A man not fit to stay at home is just the man to send abroad.” Only one thing has changed about this in the last 165 years. Female campaign donors and celebrities now compete with men for appointments to what they imagine are ambassadorial sinecures in plummy places abroad, leaving seedy and dangerous places to lifers.