How The Vietnam War Prepared Puerto Ricans To Confront Crisis

This week, as Puerto Ricans feel once again like a White House afterthought, it is hard not to conclude that Puerto Rico matters to Washington only when mainland political and business leaders need to conscript the island itself for some larger financial or military purpose.

Consider the impact of Vietnam War policy on Puerto Rico. Thanks to a new Ken Burns documentary and Hurricane Maria, the headlines have us talking simultaneously about Vietnam and Puerto Rico for the first time in 50 years. Today, few Americans remember the impact of the Vietnam War on Puerto Rico. Yet the war struck the island with the force of a political hurricane, tearing at Puerto Rico’s social fabric, raising the same questions of colonialism that are again in the news in the wake of Maria, and fueling its independence movement.

Not unlike Puerto Rico’s recent fiscal crisis, the Vietnam War brought into sharp relief the island’s unequal status as a territory of the United States, particularly after President Lyndon Johnson escalated the war in 1965. Draft-age men in Puerto Rico were subject to the Selective Service Act and called for induction into the U.S. military — even though they had no representative in the Congress that passed the Gulf of Tonkin Resolution, and even though many did not speak English. 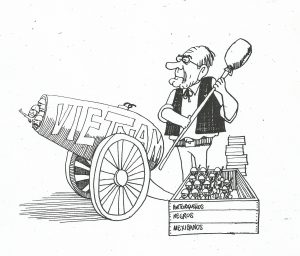 As a result, Puerto Rico’s independence movement quickly condemned the war and called for widespread draft resistance. In July 1965, Claridad, the newspaper of the Movimiento Pro-Independencia de Puerto Rico, or MPI, published its first antiwar and anti-draft column, stating: “Because Puerto Rico is an American colony, Puerto Ricans are obligated to serve in that country’s army, are used like cannon fodder in imperialist wars carried out against defenseless peoples, wars in which Puerto Rico has no interest.”

One week later the MPI called on Puerto Ricans to resist the draft and condemned American aggression in Vietnam as a guerra sucia — a “dirty war” — against “the heroic people of Vietnam.” In response, students for the first time protested outside the Selective Service’s offices in San Juan.

For the MPI, the draft represented a “blood tax,” a “taxation without representation” that Americans aware of their own revolutionary heritage should have understood. Independentistas pointed to the composition of local draft boards (which were called “juntas” in Spanish) as proof. According to Selective Service Director Lewis Hershey, draft boards were “little groups of neighbors,” best suited to look out for America’s sons. But the MPI complained that the local boards were made up of “members of the richest families, statehood proponents … members of the Lions Club, Rotary, Exchange, Citizens for State 51 and other fiends” who “funneled” the poor into the military. These draft board members were Puerto Rican mandarins, agents of the colonizers. 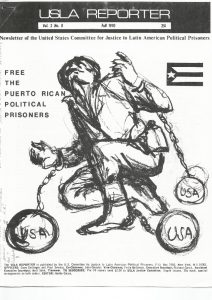 An image published in the Fall of 1970 by the U.S. Committee for Justice to Latin American Political Prisoners.

In August 1966, the first Puerto Rican draft resistance case, that of Sixto Alvelo Rodriguez, came to trial. Alvelo won support not only from the MPI — which enlisted the radical New York law firm Rabinowitz, Boudin, and Standard for his defense — but also from mainstream supporters who formed Comite de Defense Sixto Alvelo. More than 200 students signed a statement in support of Alvelo, pledging that they, too, would refuse induction. In September, the court asked Alvelo’s draft board to re-induct him (it never did) and dismissed his case and all other MPI draft resistance cases.In 1965 and 1966, long before a coordinated draft resistance movement took shape stateside, 33 members of MPI and two others refused to be inducted. Prosecutors indicted them promptly. When they went to trial in federal court, the proceedings were conducted in English — which often meant that some of the best Puerto Rican lawyers were unavailable — and if one wanted to appeal a conviction, the appeal was heard 2,700 miles away, in Boston, also in English.

The independence movement interpreted the court’s ruling as a major political victory. The MPI speculated that Alvelo’s case revealed “one of the most tyrannical manifestations of our colonial subjugation” and that Washington had backed down in the face of the threat of thousands of induction refusals in Puerto Rico.

Federal prosecutors ultimately indicted more than 100 Puerto Rican men, most of whom were convicted. On the day that Edwin Feliciano Grafals — a 26-year-old MPI member who described himself as a “nonreligious conscientious objector” — became the first Puerto Rican draft resister convicted since World War II, students at the University of Puerto Rico in Rio Piedras burned down the campus ROTC building. Six weeks later, 10,000 Puerto Ricans marched through San Juan protesting against the draft. “This is the time to decide; you’re either a Yanqui or you’re a Puerto Rican,” MPI leader Juan Mari Bras told the crowd. “Not one more Puerto Rican should convert himself into a criminal by fighting against the Vietnamese people.” 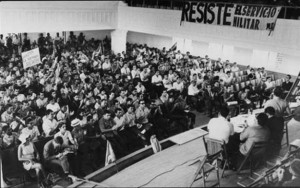 Protest against the draft in Puerto Rico and throughout the United States worked because it targeted an institution that few could defend as fair. Today, with the federal government seemingly unable to deliver post-hurricane relief to Puerto Rico in a manner equal to its assistance in Texas and Florida, we have yet one more example of discrimination against a people who right now need only compassion, sympathy and generous aid.

The devastation of Puerto Rico’s recent fiscal crisis (a crisis rooted in mainland lending policies) has now been compounded by natural disaster. It is in moments like these when, as during the Vietnam War, the second-class treatment of Puerto Rico by Washington is most obvious. The island itself has been treated as a conscript by successive U.S. governments for more than a century, for far too long.

The question is how islanders will respond to Washington this time. Will they protest? If so, what form will the protest take? Now may be a good time, in fact, for Puerto Ricans (and for the rest of us) to look to the island’s resistance to the Vietnam War as a model worth following. Fifty years later, it is worth remembering the place of Puerto Rican draft resisters in the American tradition of dissent. And it is worth remembering its place in a tradition of resistance to American colonialism. By escalating protest against the war and by risking their own freedom, Puerto Rican draft resisters kept alive the notion that resistance is a valid mode of citizenship.